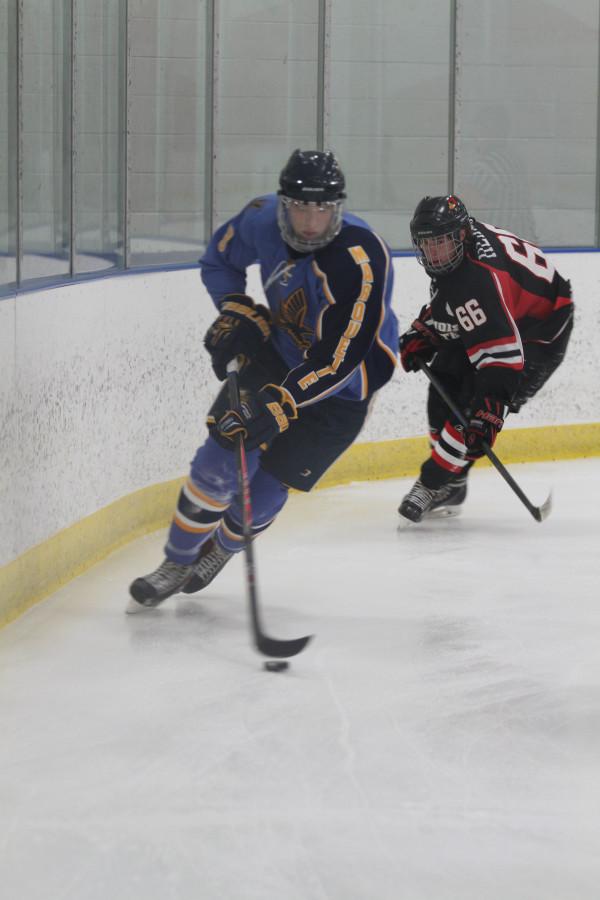 After sweeping Aurora to finish the regular season, Marquette hockey (29-7-1) enters the regional Mid-America Collegiate Hockey Association Tournament in Peoria, Illinois as the No.1  seed.

Senior assistant captain David Fabris described what the team needs to do to win the MACHA tournament.

“We have been very team oriented this season and it seems like each weekend new kids and lines are stepping up,” Fabris said. “If we can keep this going, I have a good feeling that this team can do something special.”

A key to Marquette’s success has been its ability to stay relatively healthy for most of the season. Junior goaltender Thomas Place sat out last weekend with a head injury and graduate student Ken Yamashita has been out most of the season. Despite these injuries, the team is in good shape health wise. Remaining healthy is important because if the Golden Eagles reach the championship game, it could be their 11th game in 31 days.

Fabris explained how the team has been able to keep winning despite the busy schedule.

“A lot of kids are beat up and hurting but when it comes to win or go home game situations, when the game starts, the pain seems to go away,” Fabris said. “We have played almost every weekend this season, so it’s been a lot of hockey but while it takes a toll, it has set us in a good situation and given us a lot of momentum to get to the point where we are now.”

As for its playoff schedule, the team opens up against No.8  Wisconsin-Platteville. Right out of the gate, Marquette will face its rival and a team the Golden Eagles split two games with earlier in the season. The matchup will also be an opportunity for Marquette to avenge its two previous MACHA playoff losses to Platteville. Marquette reached the title game twice out of the previous three seasons. Both times Marquette lost to Platteville, most recently a 4-2 loss last season.

Junior assistant captain Brendan Natwora was surprised to see Platteville as the eighth seed based off its success in previous years.

“I think that we were all shocked that Platteville is the last seed in MACHA Playoffs,” Natwora said. “But at this point we can’t look at rankings of teams; it’s anyone’s game. This past month showed our capabilities and if we can play the way we have been playing, especially the way we did this past Sunday, we can beat Platteville.”

If Marquette is able to beat Platteville, the Golden Eagles would face the lowest ranked seed in the next round of the tournament. This means the team could play the lowest ranked winner out of No. 7 Robert Morris-White, No. 6 Nebraska, No. 5 Lewis or No. 4 Missouri State. In the regular season, Marquette played these teams to a 3-2-0 record overall while not facing Nebraska or Iowa State. The only way the Golden Eagles would play No. 2 Robert Morris-Peoria or No. 3 Iowa State is in the championship game.

The top two teams in each region automatically qualify for nationals, while teams ranked No. 3 through No 10 in each region have a tournament to qualify for nationals. Marquette is the No. 6 in the Pacific Region, so an MACHA Tournament victory could potentially give the team a higher ranking in the region, which could position the team for a better chance at a Nationals berth.

Despite the pressure, Natwora believes Marquette has a great shot to win the MACHA Tournament.

“We have the skill the no doubt,” Natwora said. “We just need to play to our full potential and we can beat any team at the MACHA Playoffs.”