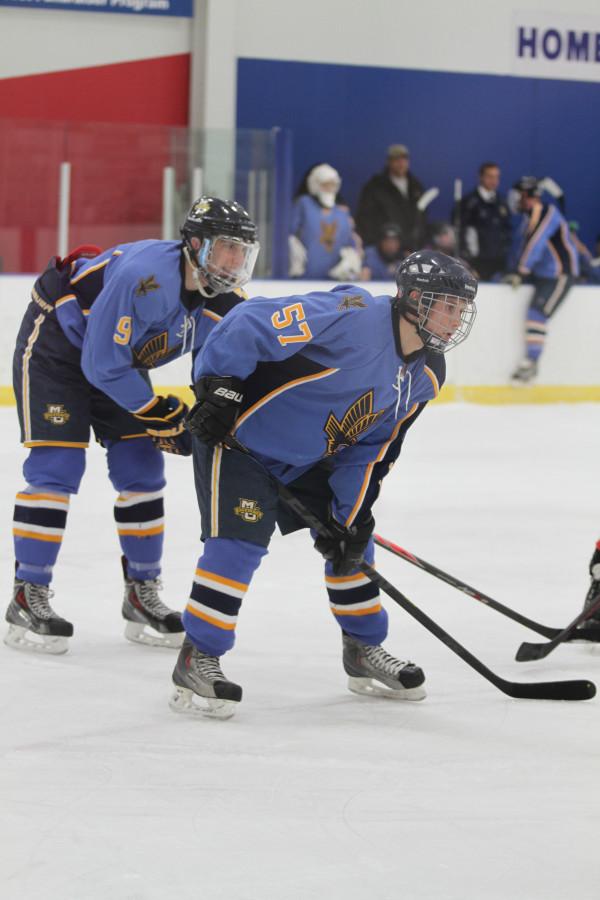 Marquette Hockey (25-7-1) is riding high with an eight game winning streak and 12 wins in its last 13 games. During the 13-game stretch, the Golden Eagles have outscored their opponents 66-35 and reached the No. 6 ranking in the Pacific Region.

Coach Will Jurgensen believes the winning streak and great play came at the right time.

“The eight game winning streak was really the only way we were going to move any farther up the standings, and the guys have delivered,” Jurgensen said. “It was really important for us to get on a roll heading into the playoffs, and that’s what we’ve been able to do.”

On the offensive side of the ice, the Golden Eagles have averaged 5.1 goals per game in part because of consistent play from senior Tyler Schwichtenberg and sophomore John Stillman. The duo have combined for a blistering 27 goals in the last 13 games for the Golden Eagles, including a tournament MVP performance during the Northwesten tournament from Schwictenberg.

Defensively, junior goaltender Thomas Place has been very dependable for the Golden Eagles and is undefeated in his last 8 starts. Place is only allowing 2.85 goals per game and has cemented the starting role going into the playoffs.

Supplementing the great performances from the trio has been timely moments from the team’s freshmen. Goaltender Robbie Arner came up big during the Northwestern tournament, allowing only one goal to the Northwestern Wildcats in their 5-1 victory. In the same game, defenseman Marc Shipbaugh scored the go-ahead goal to seal the victory. Brian Kennedy also came up big against rival Robert Morris-Peoria, scoring the first hat-trick of his career in a 7-3 victory.

Jurgensen reiterated a common theme throughout the season and said the effort level is keeping Marquette a step ahead of its competition.

“I think the bigger growth is that we play for the entire 60 minutes now,” Jurgensen explained. “We have bad shifts and still make mistakes occasionally but the guys come to the games much more prepared, and really play a more solid hockey game from start to finish compared to the Platteville weekend.”

Jurgensen considered the weekend off crucial to his team’s future success with only one more series left this weekend before the playoffs.

“I’m hopeful that this weekend off was good for the guys to get rested as we battle down the final stretch of our season,” Jurgensen said. “I know a few of our guys were banged up with the six games we played in nine days, so I felt the (weekend) break came at a great time.”

Following the weekend series against Aurora, Marquette will learn its MACHA tournament schedule. If Marquette makes the tournament finale, they will have a chance to qualify for the ACHA national tournament, hosted by the Alabama Crimson Tide.