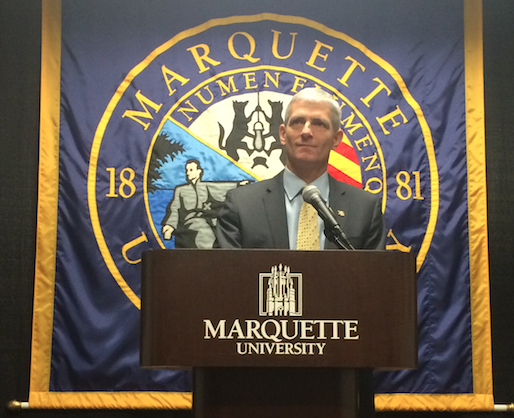 University President Michael Lovell announced many plans at his first State of the University address Thursday, including the commissioning of the Department of Public Safety to become a police force and a partnership with the Milwaukee Bucks.

DPS’s proposal to become a police force was accepted by Lovell, who said no immediate changes will be made as the transition is a time consuming process. The effort will be coordinated between Marquette and the Milwaukee Police Department.

“We can arrest the individuals, we can detain them, and actually track cars and things we can’t do now,” Lovell said. “There really is no time table but we know the steps that need to happen and we’re going to go forward in that way.”

The police force will benefit the Avenues West support Lovell said he is pushing for.

“They did a great in-depth analysis of what it would mean if we were to commission a police force and it was clear the pros in this far outweighed the cons,” Lovell said.

The option for DPS to be a police force opened up last April when Gov. Scott Walker signed a bill into law giving Marquette the choice to commission.

An athletic recreational research center will fill the 7.5 acres of land in the 800 block of E. Michigan Ave. that Lovell purchased last year. The center will be used as a training facility for athletes and researchers. It will be used in conjunction with the Bucks and include indoor track, soccer and lacrosse fields.

“We want to make Milwaukee a place around the world where world-class athletes want to come to increase their athletic performance,” Lovell said.

Over the past several months, groups of students, faculty and staff met to determine what was the best to put in the space. The groups determined it was too far away for classrooms and additional office space wasn’t necessary.

There no estimate for what the new facility will cost but the design stage is a work in progress and will be accelerated for the next 60 days. Lovell said he expects center completion will take approximately 18 months to two years.

Bucks president Peter Feigin said Marquette’s “be the difference” mantra fits perfectly since they’re both geared towards transforming and impacting.

Next month Lovell will launch a President’s Task Force on Equity and Inclusion, which will help Marquette become more inclusive in terms of under-represented groups. The force will be composed of approximately 38 faculty, staff, student and community members.

A university climate study survey will be administered Feb. 3 to gain knowledge of student opinions of life at Marquette.

Lovell described Avenues West as “one of the most exciting issues I have ever worked on.” He said he is working to transform Avenues West into what it was over 50 years ago when it was “the place to live in the suburbs.”

Lovell said the symposium hosted by him and other counterparts displayed an immense amount of passion that “started about safety but turned into wanting to make people work, shop and live there in Avenues West.”

The changes will make it more of a people-friendly place where one walks to work or church and does shopping in the area.

“We want to transform the neighborhood in (a) way that (it) becomes a destination,” Lovell said.

A new mental health research center will be developed in the College of Health Sciences with a $5 million gift from Michael and Billie Kubly.

Lovell said the new center will help “unlock many of the challenges of mental health today.”

The gift will also be used for endowed senior professorship, funding for additional faculty and funding for cutting-edge cellular and molecular research methodologies.

The university is still looking to double its funding over the next five years in addition to building a better educational infrastructure.

The graduate school’s vice provost position will split in two, making an interim dean and vice president of research innovation.

The Kohler Center for entrepreneurship will move to a more centralized location on campus so more students can access it. Space and staff will increase as well.

Marquette will have a presence in The Global Water Center in Milwaukee’s Walker Point neighborhood by the end of 2015.

“We believe Milwaukee will be the place where the world comes to get their water problems solved,” Lovell said.

The Strategic Innovation Fund developed by Lovell has grown by over $6 million. 200 new proposals from faculty, staff and students will soon be under review.

Guiding Values and the Future

As Marquette’s first lay president, Lovell said he will provide a written and visual presence of Jesuit values on campus. The values will be displayed on buildings, in lobbies and in a variety of other places.

“I wanted to send a signal to everyone that nothing was going to change just because I was not a Jesuit priest,” Lovell said.

Campus master planning, which kicked off last week, will help create a long-term plan for Marquette. Lovell said he understands there is a need for a new business building and dorms, but that the plan will look at academic and community needs and prioritize what is best for the university and its students.