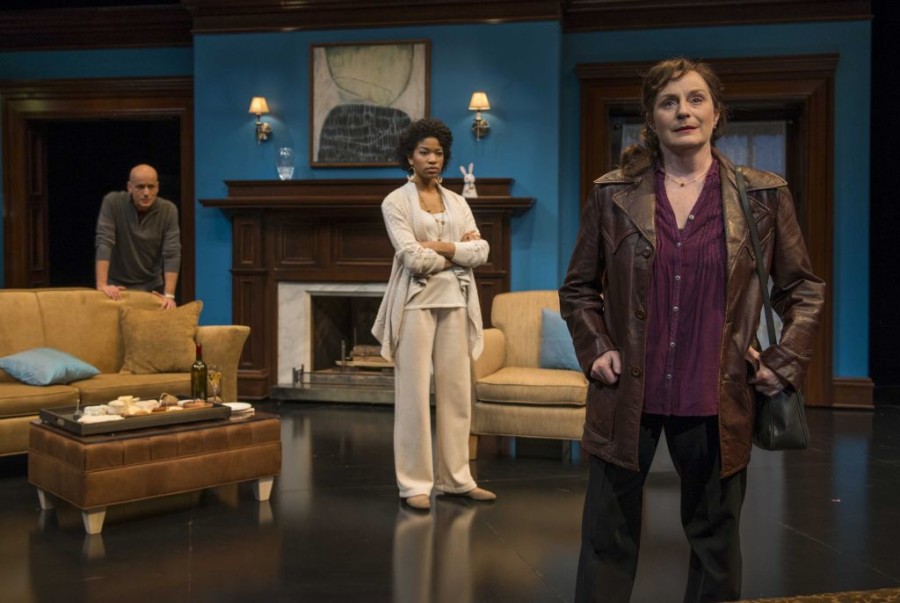 Before watching the Milwaukee Repertory Theater’s production of “Good People,” I assumed it primarily dealt with morality, ethics and any other form of values. As it turns out, morality was prevalent, but examining the symbolic representation of social class within “Good People” added a deeper meaning to the play’s storyline.

The Tony award-winning play “Good People,” directed by Kate Buckley, is filled with obscene language, crude jokes, serious issues and a widespread amount of emotion. Think “Roseanne,” “Scandal” and “Gilmore Girls,” with a touch of “The Outsiders.’’ It focuses on Margaret (Laura Gordon) as she searches for a job after being fired from the Dollar Store. Most importantly, she struggles to find her own identity. As Margaret stumbles upon Mike Dillon (Michael Eich), a past love from high school and now established doctor, it is apparent that their past is somewhat foggy, but still significant as the story proceeds.

Margaret, Stevie Grimes (Bernard Balbot), Dottie Gilllis (Laura T. Fisher) are all part of the working lower-class, while Mike, who grew up in “Southie” Boston with Margaret, has moved on to a more luxurious and accomplished lifestyle. Throughout the play, snarky comments about Mike, Jeanne (Tami Workentin) and Margaret’s upbringing are all mentioned frequently. Highlighting how they grew up gave the audience insight into how Mike and Margaret’s developed their own set of ideals, beliefs and passions. However, Margaret, due to Jeanne’s advice, decided to visit Mike Dillon to find employment, pay her rent and recollect on the past.

It was intriguing to observe how Margaret’s search for employment was used as a means to explore the internal thoughts and emotions of Margaret, Mike, and Kate, his wife (Jennifer Latimore). Although Mike cancelled his birthday party because of his daughter’s illness, Margaret still forced her way inside Mike’s lavish home. From that point on, past thoughts and experiences were shared with Kate in the room, a recipe for disaster.

While watching this play, it was hard not to feel like a Lifetime movie or ABC thriller was being performed. As more information about Mike’s past began to be revealed, it was clear to see Mike had an extremely fabricated idea of how his life was as a teenager. He claimed it was tough to live in the projects and work hard, but Margaret felt the same way. This notion of social class continuously appeared throughout the story, serving as a phenomenal way to express how everyone has their own flaws, despite a glorious home or nice outward appearance.

“Good People” also explored the theme of choices. As Margaret and Mike screamed at each other in Kate’s presence, Mike’s past began to become even more relevant, mentioning Joyce, Margaret’s and apparently, Mike’s daughter. Mike continued to bash Margaret for fooling around with the wrong crowd and not applying herself throughout high school, while Margaret told Mike that he was indeed lucky to have his father around during his childhood. This continuous dialogue between Mike and Margaret eventually led to Margaret leaving Mike’s house without a job, the original purpose of her visit.

Despite highlighting Margaret’s prolonged search for a job to make ends meet and economically stay afloat within South Boston in “Good People,” she ended up realizing that the people who endured this troubling journey with her were the people already a part of her life. Now that is an easy way to find the good in people.