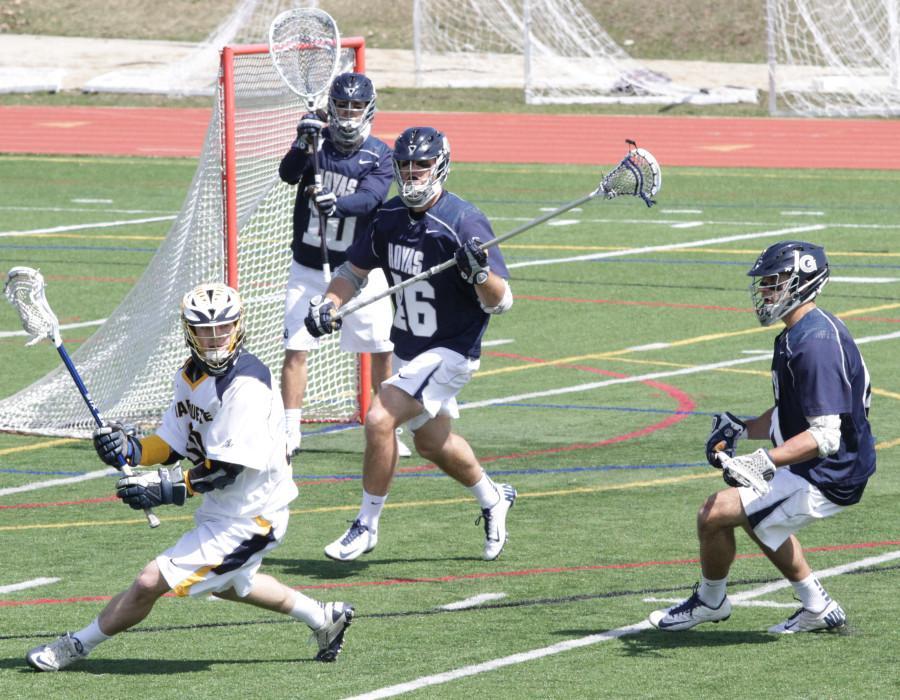 Last season, the Marquette men’s lacrosse team was able to fly under the radar, surprising many with its second-place finish in the Big East Conference. This season, Big East Coach of the Year Joe Amplo returns with a new group, knowing there will be more of a target on the team’s back.

“The biggest challenge for us is learning how to play with some expectation,” Amplo said. “Whether we snuck up on some teams last year or not, or played with an edge to prove ourselves, the question that I have for this group is can we continue to play with this edge.”

The Golden Eagles kick off their third season Saturday with an 8 a.m. scrimmage against High Point, the first of a trio of scrimmages for the team. For Marquette, it’s an excellent opportunity to work out the kinks before its season opener against Lehigh on Feb. 7.

“We don’t look at it as a win or a loss,” said Amplo. “As I tell my kids, we want you to make as many mistakes as possible…We try not to give them too much of a scouting report if any. We just try to send them out there and play.”

Possibly the biggest question mark for the Golden Eagles going into this season will be how they replace the program’s all-time leading scorer, Tyler Melnyk, who graduated last season. Amplo said he’ll need production from multiple players to replace that production.

“We count on guys like Conor Gately, Joe Dunn, Kyran Clarke and our midfielders,” Amplo said. “I don’t know if anyone is going to be scoring 35 goals, but hopefully between a few of those guys they can get to that number or better.”

Sophomore midfielder Ryan McNamara said the offense will benefit from having a lineup with lots of playing experience.

“Another year has passed and basically our whole offense is coming back with another year under our belt,” McNamara said.

Now three years into the program’s history, the players have started to become more comfortable playing with one another. Amplo said these past few weeks of practice have been the best he’s seen at Marquette, largely due to the unit beginning to mesh.

“On paper we may still look like a young team, but there’s a lot of experience with the youth,” Gately said.
+
“Even at the beginning of the year we knew where each other was going to be,” McNamara said. “We build upon that the whole year.”

Also joining the team this season is graduate student Jordan Greenfield. The 5-foot-11 attackman most recently played college lacrosse in 2013 at Fairfield. Greenfield led the Stags in goals (34) and points (42) during his final season at Fairfield.

“I’m curious to see what he’s all about on the field,” Amplo said. “He’s certainly had some good practice days and he’s a real good shooter.”

McNamara said from what he’s seen in practice, Greenfield could be just as good, if not better, than Melnyk in the offense.

“Coach puts me into the mindset that I’m going to need to step up if our team is going to win,” Grill said. “I thrive under the atmosphere. I take it as a personal test. I take it as an opportunity to show the country that I can compete against these top attackmen.”

Grill said he believes he not only has to prove himself, but help validate Marquette as a program.

“I think we still perceive ourselves as the underdog,” Grill said. “We didn’t get the preseason recognition we thought we deserved.”

Amplo says having players like long-stick middies Liam Byrnes and Tyler Gilligan as well as defensive middie Jacob Richard helps make Grill the focal point. The staff doesn’t worry about isolating Grill on one player because they know other members will do the rest of the work.

Sophomore Jimmy Danaher returns between the pipes this season. The 5-foot-9 goaltender played in 13 games for Marquette last season, posting an 11.13 goals against average and a .466 save percentage. Junior Matt Barone and freshman Cole Blazer will likely get some game time action as well.

“Every day has been a constant battle,” Danaher said. “I think that’s helping all three of us, knowing how tight the battle for the goalie position is.”

Marquette will be playing a majority of its games on the road again this season. Only three of the Golden Eagles’ 15 games (St. John’s, Duke and Denver) will be played in Milwaukee. However, many of the returning players are getting used to the road trip their season often becomes.

“Our kids don’t complain about the travel,” Amplo said. “In fact I think they love going on the road. It brings us closer together as a team.”

Marquette will need to adjust to some new NCAA rule changes that will be implemented this season. The NCAA moved one step closer to a consistent 60-second shot clock with new visible shot clocks at every Division I venue. Referees will be able to activate a 30-second shot clock after a stall warning is called.

Also changed are faceoff regulations. Players will no longer be able to carry the ball with the back of their stick, a very common tactic among face-off specialists.

The Denver Pioneers, who won the conference championship last season, are once again the favorites. Denver, ranked No. 1 in the country in Inside Lacrosse’s preseason rankings, features a formidable attacking unit in senior Wesley Berg, junior Jack Bobzien and sophomore Zach Miller.

The Golden Eagles know Denver is seen as the favorite, but know the trophy won’t simply be handed to the Pioneers.

“I was talking to the Georgetown coach (Kevin Warne) this morning,” Amplo said. “Both he and I were joking that we’re going to send a couple pieces of tin foil to Coach Tierney and say, ‘Here’s your conference championship for the next few years.’ That’s what everyone is telling them they are going to be.”

Similarly to last season, Marquette will end its regular season against Denver. The two played for the regular season conference title in last year’s finale, with the Pioneers gliding to a 17-9 victory. This season’s matchup will take place in Milwaukee for the first time.

Following Saturday’s scrimmage at High Point, the Golden Eagles will head to Ann Arbor, Mich. to scrimmage the Wolverines for the third straight season and Denison for the second time in three years. Both games will take place Jan. 31. Like Marquette, High Point and Michigan are two of the newer Division I lacrosse programs. Amplo said staying in contact with the other programs can help make Marquette stronger.

“I do talk to coach (Jon) Torpey at High Point a bunch,” Amplo said. “We go back and forth with some of the struggles and challenges that we both have faced. We both learn from each other.”

The game might not appear on any records, but that does not mean it will not be competitive.

“I do think there’s some rivalry with our kids and their kids,” Amplo continued. “We’re all on this path together.”

“A lot of the people who play here were also recruited by some of those schools,” McNamara said. “Sticking it to the other coach is kind of a fun thing to do.”

Amplo doesn’t like to set specific goals when it comes to wins, but the players have set the bar high. In year three, they hope to make the NCAA tournament for the first time in program history. The team will take their first step towards that goal Saturday.