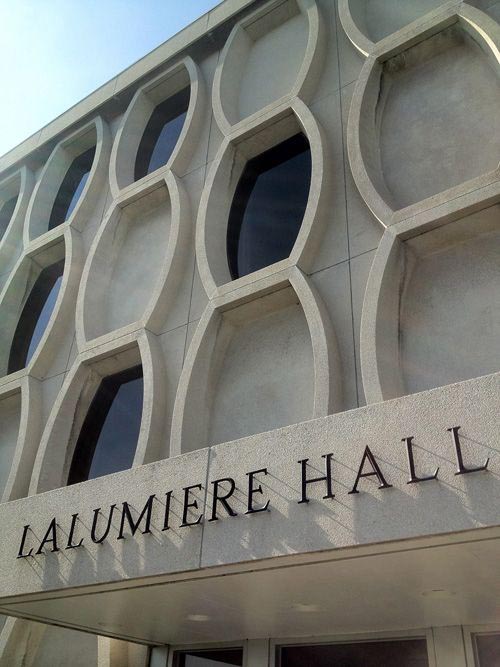 Inner beauty is all that really matters, unless you are a college campus, and Marquette is not pretty. It is not because of insufficient green space. We are an urban campus, so lack of greenery is to be expected. Even so, the green space we have is lovely when the geese aren’t turning it into an excretory minefield.

No, the ugliness at Marquette comes from the architecture. More specifically, there are ugly buildings and they are inconsistently ugly at that. The buildings at Marquette are an aesthetic timeline of architectural trends, and some of those trends have a more lasting appeal than others.

Ugly Building Exhibit A: Lalumiere Language Hall. It sits at the south end of the Central Mall like a dingy, fossilized honeycomb. It is short, squat and there are not nearly enough windows. Construction on Lalumiere finished in 1970, in the middle of a period filled with ponchos and bell-bottoms. Similarly, the Wehr buildings were completed in the ’60s and ’70s, and now they look like a cluster of architectural acne. Even the Alumni Memorial Union, finished in 1990, is a hulking behemoth of Romanesque appearances. It is intimidating yet bland, just like the wacky head-to-toe prints that were popular in the late ’80s and early ’90s.

So if the ugly buildings are all just products of the era, we have to look at the timeline of buildings holistically. Marquette Hall and Johnston Hall were both completed relatively early in the first quarter of the 20th century. Their history on campus gives them the advantage of being classics, as well as having been built during a period when beautiful buildings were all the rage.

Engineering Hall, the Law School and Raynor Library are all 21st century buildings that utilize light and strong vertical lines to create aesthetically pleasing interiors and exteriors. So we have the modern beauties and the classics. Buildings on our campus should be a mix of the historical and the modern because that is what Marquette is as a whole; built on tradition, but always adding progress to the equation. And then we have the ugly in-between buildings looking like Marquette’s architectural puberty.

Perhaps that’s why the ugly buildings on campus bother me so much. In an otherwise smooth synthesis of past and present, these ugly in-betweeners are visual representations of the bumps and hiccups in that process. It is a little impractical to tear them down just because they’re ugly, so we could be stuck with those reminders for a while.

That also might be why I like the newer buildings. Unlike the pseudo (and failed) attempts to be original and avant-garde with buildings like McCormick Hall and Lalumiere, the newer buildings have more enduring design. Verticality and lots of windows will probably never go out of style. Just look at the Empire State Building. It was finished in 1931 and it’s still a pretty darn fashionable building.

For now, we can go ahead and acknowledge our ugly buildings. Embrace them, not that we really have a choice, but if and when the chance comes to replace those buildings, let’s not get overly sentimental remembering our campus’ awkward phase. Like untagging an unflattering photo of yourself on social media, we can make way for newer and prettier structures on campus that provide a better picture of who we are.