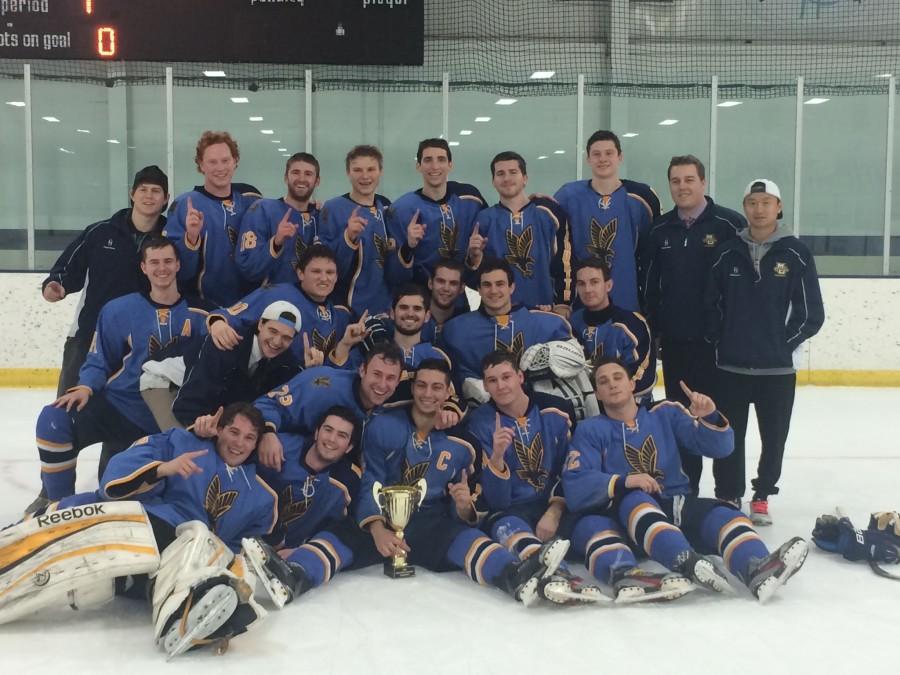 The Marquette club hockey team (23-7-1) completed a 4-game sweep en-route to a tournament championship at Northwestern with a win against Notre Dame. The team went undefeated in its round-robin bracket matchups against Santa Clara, Northwestern, and Michigan, and beat Notre Dame in the finale.

Coach Will Jurgensen was proud of how his players responded to the quick turnaround off break, given the importance of tournament success for playoff seeding.

“This was a big weekend for us because of the regional implications it had and our success has put us in a really good spot moving forward,” Jurgensen said. “This was exactly the momentum we needed heading into the next weekend for senior night and our final home game. To come back from a long break and work as hard as these guys are is a true testament to their character and how bad they want to keep moving on.”
In Friday night’s matchup against Santa Clara, after giving up a quick goal to the Broncos, the tide quickly turned with three unanswered first period goals for the Golden Eagles. Senior Tyler Schwictenberg was able to score the first two goals off assists from freshman Brian Kennedy, then freshman Marc Shipbaugh followed a goal of his own from senior Paul Gunza. A goal by each team in the second, kept Marquette with a comfortable 4-2 lead, the goal coming from junior Mitch Ellena. Two more goals in the third period from Schwichtenberg and sophomore Will Podewils secured a 6-3 victory over the Broncos.

Saturday’s game was a rematch of Marquette’s series against Northwestern from October. But while Northwestern wanted to avenge its home sweep, Marquette showed no mercy and won easily. Marquette had a small lead after the first period with Schwictenberg’s fourth goal of the weekend off an assist from sophomore Corey Quinn. The next two periods, Marquette would score two in each, quickly pulling away from the Wildcats. The four goals from Schictenberg, Shipbaugh, Kennedy, and sophomore Corey Quinn, coupled with quality goaltending from freshman Robbie Arner, gave Marquette a 5-1 victory.

Sunday night’s matchup against Michigan was a nail-biter for Marquette, with the Golden Eagles winning 7-6. After being down 3-2 after the first period, and tied 4-4 after the second period, the teams went goal-for-goal until it was 6-6. However, in what’s seemed like the calling card of this team all season, Marquette found another way to outscore their opponent in the third period. With 1:34 left on the clock, Quinn was put home a rebound, giving Marquette the lead and the eventual 7-6 victory. The other scorers for Marquette were Podewils, Ellena, sophomores Chris Morrow and John Stillman, junior Brendan Natwora and one early from Quinn.

The Golden Eagles didn’t have a too hard of a time putting away the Fighting Irish in the tournament championship. Stillman and Podewils each recorded two goals, along with Morrow, and sophomore Matt Poli and the Golden Eagles easily rolled over the Irish 6-1.

In addition to the victory, Schwichtenberg was named MVP of the tournament.

After winning the championship game, Jurgensen said the team’s intensity level was the most important factor in their tournament wins.

“I’ve learned mostly that they want to battle and work hard to try and put ourselves in a good position for regionals,” Jurgensen said. “The guys are serious about trying to win some tournaments before this year is over and they have done well since coming back from break. We didn’t play our best, but the boys found a way to win and that’s important moving forward.”

Following the tournament, Marquette will play its final home series of the year against Loyola. It will be the final home game for seniors Matt Vuoncino, Tyler Zanon, David Fabris, Paul Gunza, Tyler Schwichtenberg, and Ken Yamashita. The busses will leave promptly by 6:45 PM for Friday night’s game outside of McCormick Hall.