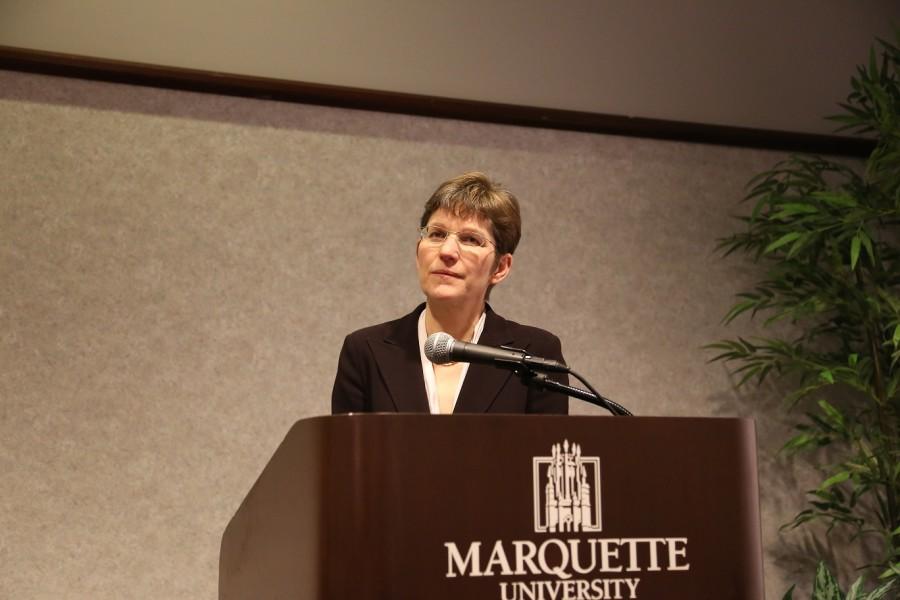 Final four provost candidate Rowena Pecchenino spoke on campus Jan. 15 and 16, saying she has a plan to bring Marquette to the next level.

The visit is part of a series where the final four provost candidates make two-day stops to speak and answer questions with the Marquette community. Pecchenino is from the National University of Ireland, Maynooth where she serves as a professor, head of the Department of Economics, Finance & Accounting and dean of the faculty of social sciences.

Pecchenino said she thinks working collaboratively with faculty, students and deans will make university excellence an attainable goal. This excellence will promote common good throughout Marquette and the Milwaukee community as a whole.

“Competitive price, good education and more,” Pecchenino said. “The ‘more’ is what the students really want.”

When talking about the Marquette faculty, Pecchenino said she would make it a priority to ensure current and future members have the ability to grow professionally and spiritually.

“I want to earn their respect and trust,” Pecchenino said. “But most importantly I’m going to care for my colleagues.”

When asked about the financial budget, Pecchenino talked about determining what funds are available, growing those funds and then allocating them properly.

“I always want to know where we are, where we’re going and how we’re going to get there,” Pecchenino said. “I’m a dedicated academic with invaluable experience as a leader. I have a familiarity with the bottom to top. I’m not afraid to make hard decisions or work hard for this university.”

Concerning student interaction, Pecchenino said an open-door policy would be a possibility for her.

“I want open communication with all levels,” Pecchenino said. “Both students and teachers view the classroom in different ways, so I need to make sure to communicate with everybody.”

Although Pecchenino has a strategic plan to achieve university excellence, she talked about collaborating with other faculty members to achieve the best plan.

“I like to talk to people and work with them to find out what they want and how that works in the plan,” Pecchenino said. “One thing people don’t like is being imposed on.”

Investing in Milwaukee schools is another hope of Pecchenino’s.

“I want to reach out to the community and help them improve,” Pecchenino said. “I want to provide them with a road map to higher education. There shouldn’t be any invisible barriers around this university.”

When asked about diversity, Pecchenino talked about the importance of recruiting, saying she would advertise in different locations to cast a wider recruiting net.

To access the provost videos and feedback forms, click here. Videos are restricted to on-campus and Marquette VPN users. The feedback forms are due Wednesday, Jan. 28.