Marquette Theatre to produce “How I Became a Pirate” 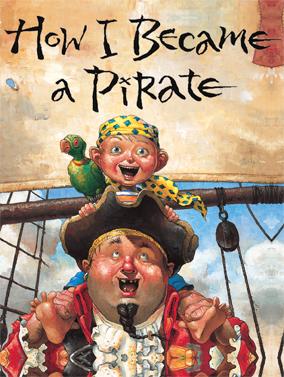 MU Theatre continues its run of "How I Became A Pirate" this weekend. Photo via static.arvada.org

Who knew pirates would ever come close to all the snow in Milwaukee? In fact, Marquette Theatre is currently presenting the musical play, “How I Became a Pirate.” The musical, written by Janet Yates Vogt and Mark Friedman, is an adaptation of a children’s book bearing the same name by author Melinda Long.

The story tells the amusing tale of the unlikely encounter between a young boy and a group of pirates. Braidbeard and his crew are looking for a digger to help them bury their treasure chest. Little Jeremy then joins the clan of goofy pirates and sets sail on a new adventure. Between musical pieces, sharks and jokes, the pirates and Jeremy get to know more about each other and young Jeremy even attempts to teach the pirates a thing or two about soccer.

Young Jeremy soon learns that although pirates lead a life full of adventures, there is no place like home.

Peter Sisto, a senior in the College of Education, plays the lead in the production. He is excited for the opportunity to play Jeremy Jacob .

“This has to be my favorite kids show that I have been apart of in the past three years,” Sisto said.

Sisto added that because it’s a kids show, the show has a message children can take away from it.

“Jeremy Jacob begins to miss his home and longs to be reunited with his family,” he said. “I guess if (the show) has a message, it would be to never forget your roots. It’s exciting to learn new things and to travel different places, but you can never replace the ones you love.”

Katie Shanahan, who plays the lovable French cook on the ship named Pierre the Pirate, said the chance to play the role fulfills a childhood want.

“The very understandable humor makes the show enjoyable from the one- liners to jokes with deeper meanings,” Shanahan, a junior in the College of Communication, said. “Let’s face it, everyone at one point has wanted to be a pirate.”

The Marquette Theatre adaptation, directed by Todd Denning, presents sweet musical pieces and a funny script people of all ages can enjoy. Denning also played the character Braidbeard in the original production of the show, which premiered at First Stage Children’s Theatre in Milwaukee in 2009.

“It was cool to work on the show with Todd since he was in it, as well as directed it,”said Dan Callahan, who is also in the production as Sharktooth. “He has experienced the show from both sides of the spectrum.” Callahan, a senior in the College of Communication, said Sharktooth is actually a sensitive guy, despite his reputation as the scariest pirate in the seven seas. “The physical humor from the characters appeals to children, while the deeper humor, such as Sharktooth singing about his sensitivity, appeals to adults,” he said. The numerous dance numbers and active environment of the show have the ability to charm theatergoers of all ages.

The audience itself adds meaning to the musical, with many small children who dress up as pirates  and wave around foam swords. The set contributes to the show with a giant pirate ship and sail that drop from above. “We added paintings and extra pieces to fulfill the illusion of an actual pirate ship on a semi-low budget,” Shanahan said.

The entire show only lasts 50 minutes. “The short show is perfect for students who want to enjoy theatre and want to see their classmates perform, but are on a tight schedule,” Callahan said.