BlueLight Safety: An App That Cares 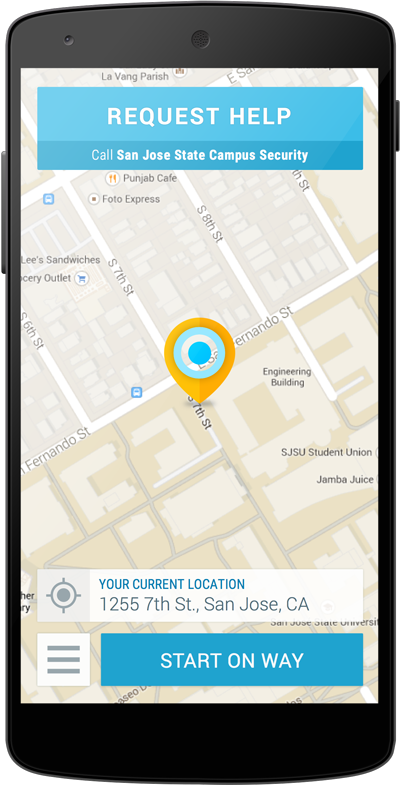 In October, my thoughts were steeped in issues of public safety, having spent the first part of the semester researching local crime activity and safety initiatives for another Journal story. Perhaps it was for that reason that a tweet from Marquette’s Twitter account promoting a new app called BlueLight Safety immediately caught my eye.

I quickly went to the Google Play Store so I could try the app out, only to find out the app wasn’t compatible with my two-year-old Samsung phone. A quick tweet back at @MarquetteU to share the unfortunate news became a direct message exchange between Marquette social media director Tim Cigelske and myself, where I was given the chance to try the app out on a test phone.

A few days later, I was sitting at the Brew with Cigelske, MUSG president Kyle Whelton, and MUSG executive vice president Natalie Pinkey, holding a Nexus 4 smartphone while I got the rundown of the app from the other three.

The app has two main functions. The first, and perhaps most important, is the Request Help button. The bright blue button sits at the top of the main app screen and can be added as a lock screen widget on Android phones for faster access. Double-tapping the button immediately dials the closest safety responders, as determined by the phone’s GPS location. On a college campus, the app connects to campus police or public safety; off campus, it connects to 911.

In addition to contacting responders, using the Request Help button also sends a text notification (which can be toggled on or off) to five emergency contacts, alerting them that the user has made an emergency phone call.

As Cigelske and I would later find out, the Request Help feature is extremely effective. While running the app for a segment on Fox 6 News, he was able to get a hold of a DPS dispatcher in a matter of seconds, letting them know the call was just a drill. Because the app was still connected to my personal contact list, however, an alert was instantly sent to my emergency contacts letting them know I’d placed a call through the app, some of whom immediately contacted me and anxiously asked if I was safe. Though the incident caused something of a stir, it had proven that app could deliver what it’d promised—and, of course, that I’d selected reliable emergency contacts.

The second feature is On My Way, which allows users to share their location as they travel from point A to point B. Building off the custom of sending friends and family a text after arriving home safely, the feature offers the same kind of notification using GPS pings to automatically relay the message. When using On My Way, the user selects people from their contacts list who then receive a text with a link showing the user’s location on a map—which updates in real-time—until they have reached their designated location.

Testing the app’s On My Way feature proved simple enough. Several times a week, I tended to make a solitary late-night trek from the Tribune offices at Johnston Hall to my off-campus apartment past Kilbourn Ave, a walk I considered too short for a LIMO ride but just far enough to be a little nerve-wracking each night. These were the kinds of walks that the app looked to make safer.

At first, I wasn’t sure how something as simple as an app could achieve that feeling of safety, but I ran the features anyway. To my surprise, I quickly noticed a difference. Where previous late-night walks had, of course, felt incredibly solitary, the simple notion that two or more of my friends could essentially keep an eye on me from afar was comforting. As I arrived home, the app sent its automatic notification of my arrival. My friends soon responded, “Good to know you’re safe :)” and, “WHY AM I STALKING YOUR MOVEMENTS NOW?!”

BlueLight was the app I’d never known I needed.

As I tested out the app, Cigelske put me in contact with Preet Anand, founder and CEO of PAVE Digital Inc. and creator of BlueLight Safety. Having met him earlier in the year during the Marquette PR & Social Media Summit, Cigelske let me know that Anand wasn’t just any app developer; “He has a pretty interesting story. Make sure to ask him about it,” he said.

Like many of us, Anand’s first exposure to campus crime rates was during freshman orientation at Santa Clara University. “I heard all these crazy stats about sexual assaults on campus from public safety,” Anand said, “and I was shocked.” Thinking of the women in his life, including his now-wife, and how such statistics could affect their lives inspired Anand to “put a dent in the numbers” and come up with an innovation that could make campus safer for students.

Anand’s original solution was to create a new design for a pepper spray canister. A common self-defense tool among college students, the goal was to create a canister that would not only release pepper spray upon use, but would activate a tracking signal indicating the user’s location and a front-facing camera to instantly capture images of the incident and assailant.

Creating the pepper spray canister turned out to be fairly simple, and soon, Anand had a functioning prototype. However, the initiative hit a roadblock: production of the single canister had been costly, meaning the new devices would have to be sold at a significantly high price. With simpler but more cost-effective alternatives on the market, Anand’s creation would inevitably be inaccessible for some and overlooked by others. Though the project was ultimately put aside, Anand remained confident that he would achieve his goal through other means.

After graduating from Santa Clara University in 2010 with a degree in engineering physics, Anand took a job with Zynga, the company known for developing games such as FarmVille and Word with Friends. Once there, Anand served as a Leader of Product Management, becoming one of the youngest individuals in company history to hold the position. For many, a prestigious position in such a well-known tech company is a dream come true, the start of a long-term, established career.

Nonetheless, Anand had not forgotten his original goal of improving public safety. It was a minor moment during his time at Zynga that finally sparked the idea he needed.

“I saw someone get up and grab their smartphone, but leave their wallet behind,” Anand said. Smartphones had become an integral part of society, unconsciously prioritized even before one’s own wallet. Anand, already familiar with mobile platforms, saw potential in the smartphone, a device already found in most pockets, doubling as a useful tool.

By February 2013, Anand left Zynga to form PAVE Digital Inc., the company that would produce BlueLight.

At first glance, some may think Anand’s choice to leave a secure job with such a prominent game company was a risky gamble. However, the numbers were more in his favor than ever before. Simply looking at Marquette’s own statistics, in 2010—around the time Anand started at Zynga—smartphone usage stood at approximately 39%; by 2013, the number had skyrocketed to 91%, and as of this August stands at 96% of all Marquette students.

The problem that Anand had noted with his original pepper spray idea was its overall inaccessibility. Now, however, he would be working to integrate his ideas with a form of technology that most of his target audience already carried in their pockets every day.

Anand came up with two main ideas: building a safety-oriented app, and creating a dispatch dashboard for use by campus police and public safety departments. Drawing from his pepper spray camera idea, the dashboard would allow dispatchers to see a caller and their location, improving their ability to assess an ongoing incident and send assistance in a quicker, more efficient manner. But in order for the dashboard to work, there first had to be a significant user base for its related mobile app; otherwise, the system would fail to serve its purpose.

As a result, Anand and his team began developing BlueLight in its current form in May of 2014, prioritizing the creation of an efficient and readily-accessible app. So far, they’ve met with success. As of this month, BlueLight has seen requests from students at over 350 campuses and fully supports over twenty schools, including Marquette.

It is important to note that BlueLight is not the only app of its kind. However, MUSG and university administration opted to utilize BlueLight because of the uniqueness of its On My Way feature, as well as its lower usage price overall—other apps charge students for download and would cost the university as much as $40,000 per year for campus support.

With similar apps raking in thousands of dollars, it seemed odd that Anand wasn’t taking advantage of the opportunity to charge at high prices as well. Anand maintained that PAVE Digital was indeed a for-profit company; however, he saw the app’s credibility among users as more important than making a quick buck.

“It’s important to be able to show that the app actually works,” Anand said. Offering the app for free in its early stages helps maximize distribution among students, he adds; making BlueLight a for-pay app could dissuade potential consumers and limit access. “By the time we add a subscription fee, students would ideally be willing to pay because they know it’s something worthwhile, something that works. But it’s important to earn their trust first.”

Beyond the question of money, what makes BlueLight special is ultimately the human element. Anand made sure his team shared the same passion for safety he does. “Bringing others on board was a long process of finding people who were excited and motivated about what we were working on,” Anand said. “Then we hired them!”

Throughout the school year, Anand has returned several times to campus, meeting with students and staff to get the word out and brainstorm ideas and improvements for the app. During finals week last semester, Anand offered to buy Starbucks drinks for any BlueLight user who took the offer up, eager to meet his audience and hear their thoughts. When away, he remains accessible, inviting individuals to contact him via email—preet@getbluelight.com—with any questions or concerns.

BlueLight’s slogan assures, “Lead the way. We’ve got your back.” With Preet Anand’s enthusiasm for safety, there’s no doubt of that.

The app is now available for Android and iOS.