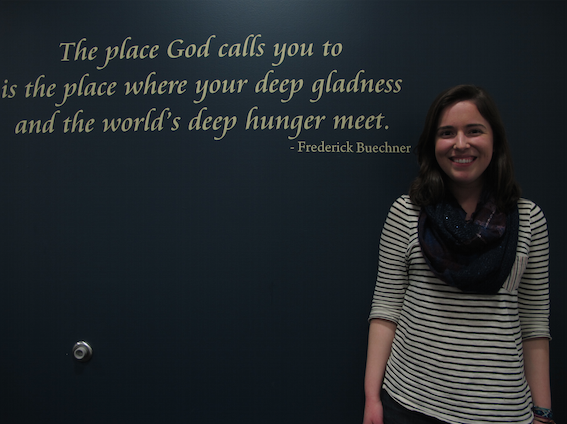 This year’s winner of Marquette’s Social Innovation Design Contest presented a pitch of her entrepreneurial venture aimed at addressing the lack of a simple, yet vital item in Ecuador: soap.

Jane Lorenzi, a freshman in the College of Arts & Sciences, was named grand prize winner of the competition Dec. 4. Her idea, Bar of Hope, is a program aimed towards teaching Ecuadorian women to make soap to sell in America. The funds from the sales would go back into the women’s communities to fund health classes. These “invasion communities,” which form on the outskirts of urban hubs, are some of the poorest in the country are often in dire need of both education and supplies.

“Jane really understood the problems that she wanted to solve,” said Kelsey Otero, social innovation coordinator of the Social Innovation Initiative. “Not only did she understand and clearly articulate the problem, but she had a really innovative solution – something that was so simple it was profound.”

Lorenzi spent six weeks living in one of the communities last summer, where she was most bothered by the lack of sanitation contributing to illnesses that kept people from going to work or school.

She will now have the chance to travel to the 2015 Changemaker Student Summit hosted by the University of San Diego. She will also be featured at a men’s basketball game as a “champion of change.”

“There’s a lack of education that comes with that level of poverty that it’s really hard for them to understand how disease is spread,” Lorenzi said. “So many of the students that I worked with were chronically missing school because of respiratory illnesses or tapeworms or parasites … People should not be missing school and adults should not be missing work simply because they are being sick from something that should be preventable.”

Lorenzi and 63 other competitors presented their five-minute pitches to a panel of three judges. Seven top pitches were chosen, including runners up Andrew Terenzio and Rosie De Luca’s venture, Public Marquette, aimed at addressing the lack of healthy food in the Avenues West area with a grocery store.

“I think (being named runners up) has made people more aware,” De Luca said. “It’s given us more visibility in the Marquette community.”

Lorenzi aims to continue developing Bar of Hope by consulting with the professionals she has met through the contest. She is considering taking advantage of other competitions which are a part of the Social Innovation Initiative, such as the Good Money Challenge.

“I think sometimes we can be bogged down by the idea that we’re insignificant or we’re not making a difference or there’s too many problems in the world but if we can just make a difference for just one more person – if one more child goes to school an extra day because he’s no longer sick at home or one less child dies of diarrhea, we made a difference for that child,” Lorenzi said. “That one life is changed. That one future is propelled forward.”