Marquette to give funds to Dwyane Wade’s “Live to Dream” 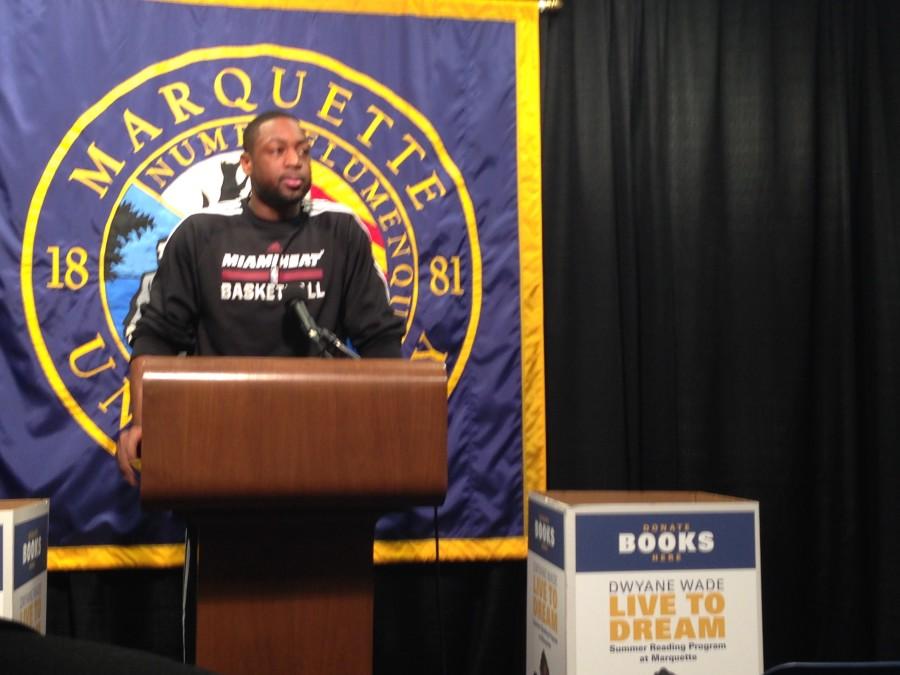 “Live to Dream” will be hosted by the Ralph C. Hartman Literacy and Learning Center and will help second and third grade students with reading in order to bridge the literacy gap, according to a news release. Wade’s program will provide free transportation for children to and from the Hartman Center located on campus and build off the center’s existing reading program.

“We are very proud of you and all you’ve accomplished not only in the NBA, but also as a person,” Lovell said at the event. “I am excited about the opportunity (this program) will give students … There is nothing more transformational for an individual than education.”

Wade, accompanied by his sister Tragil, who serves as executive director of the Wade’s World Foundation, approached the podium fresh off of a Miami Heat practice dressed in Heat warm-ups.

“It is always very important to give back to the communities that have given us so much,” Wade said. “As players and people, we always want to do something but we don’t always know what that something is. Going through personal situations helps you pick foundations and with having a seven-year-old son, I understand the importance of reading.”

When asked about Marquette, Wade smiled.

“Marquette is in my heart, so it is always on my radar,” Wade said. “Every time I play basketball games, I play for Marquette. From the first day I walked on campus, this was a community that accepted and loved me.”

Wade is in town because his team, the Miami Heat, is taking on the Milwaukee Bucks underneath a 2003 Final Four banner he helped hang and his retired number.

For two seasons, Wade played Marquette home games in the BMO Harris Bradley Center, averaging 19.7 points a game until he declared for the NBA Draft and was taken fifth overall by the Heat. In his twelfth professional season, Wade has won three NBA Championships, an Olympic gold medal in 2008 and been named to 10 All-Star games.

The “Live to Dream” program will be collecting books appropriate for children at the Bradley Center during the Dec. 6 game between the Marquette and the University of Wisconsin-Madison.

“I am thankful to have the opportunity to come back here and do something,” Wade said. “To (whom) much is given, much is required and I am thankful we can lend a hand to help this community and our youth.”