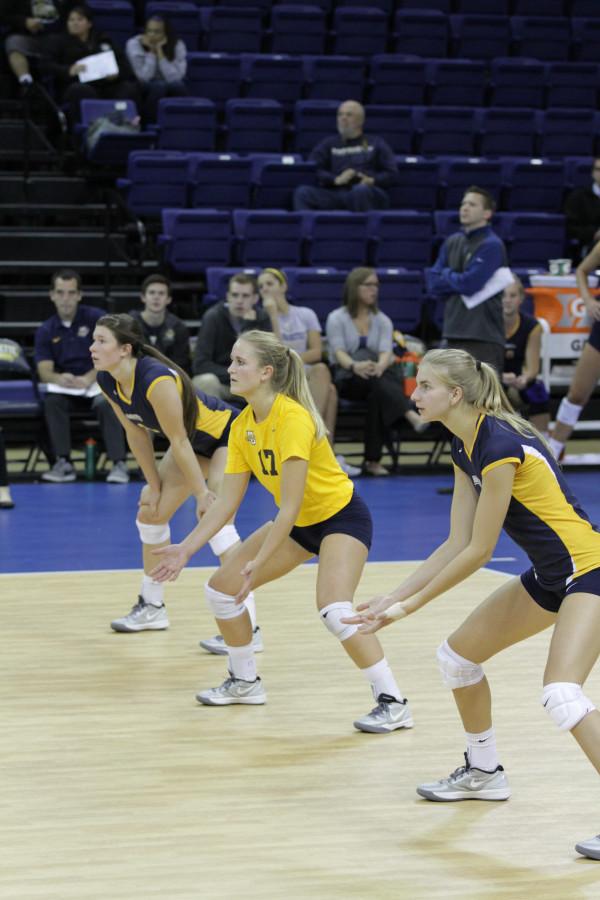 The Marquette women’s volleyball team is dancing for the fourth consecutive season, as the Golden Eagles were awarded an at-large bid to the NCAA Division I Women’s Volleyball Championship Sunday. Marquette (24-8) will take on Illinois State (26-5) Thursday, Dec. 4, at the Wisconsin Field House in Madison at 5 p.m.

The Golden Eagles are led by Big East Player of the Year, sophomore Autumn Bailey, and All-Big East First Teamers senior Lindsay Gosh and redshirt sophomore Meghan Niemann. Bailey is a force to be reckoned with, as she comes in with the most kills, points and service aces (both total and average per set in all three categories) in the conference and is the only sophomore in the top 10 nationally in points per set (5.48), kills per set (4.73) and total kills (544). Niemann and Gosh both ranked in the top seven in the conference in hitting percentage and Niemann had the fifth-most blocks in the league.

The Golden Eagles finished their season with a hard-fought, yet ultimately disappointing loss to Seton Hall in five sets in the Big East Tournament Semifinals, 23-25, 12-25, 25-19, 25-18, 11-15. Redshirt junior Courtney Kintzel led the Golden Eagles with a career-high 19 kills in the match on a .444 hitting percentage. Bailey had 14 kills of her own, despite a lackluster .076 percentage. Defensively, Marquette had 11 blocks, including three solos and seven block assists from Niemann. Houg also had a career night with 35 digs.

Marquette is 2-3 all-time in the NCAA Tournament and has advanced to the second-round of play twice. In 2011, the Golden Eagles defeated Western Kentucky and in 2013, they topped Louisville.

Marquette’s first-year coach, Ryan Theis, made the big dance four times in his tenure at Ohio and advanced to the second round in three of the four appearances.

Illinois State is coming off a 22-match winning streak and a Missouri Valley Conference Championship. The Redbirds haven’t lost a match since Sept. 12, when they fell to Baylor in five sets at a tournament in Washington D.C. Marquette and Illinois State have met only twice and split the series 1-1. The Golden Eagles won the last match last season in five sets at the Al McGuire Center. Gosh led Marquette with 16 kills and Niemann added 14.

Marquette will bus students to Madison for the game for free. The buses will depart from the Al at 2:30 p.m. Thursday and return at approximately 9 p.m.