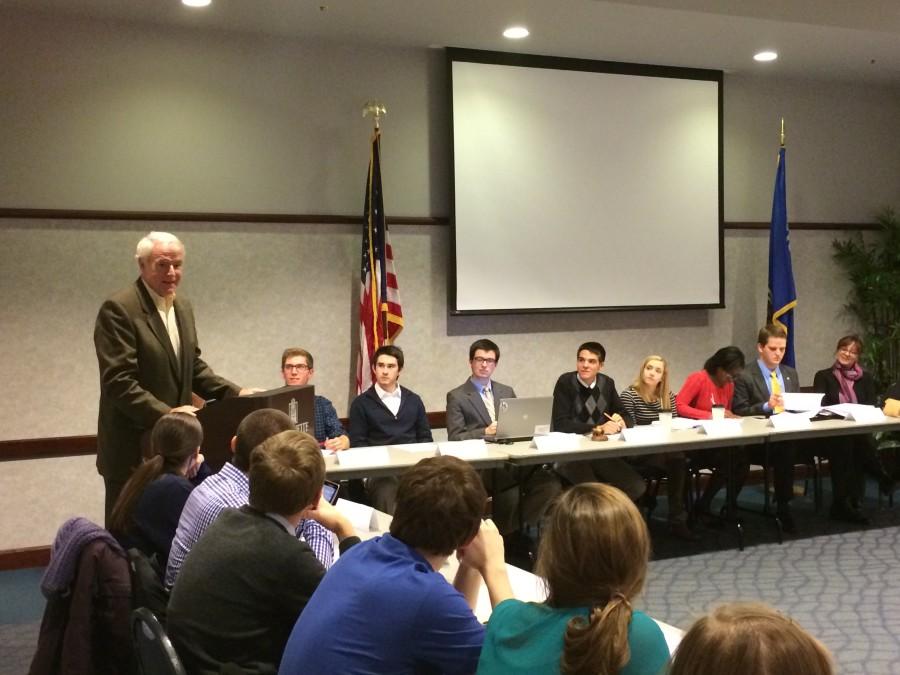 Mayor Tom Barrett suggested he would support using the income taxes of Milwaukee Bucks athletes to support the construction of a new arena for the team while speaking with Marquette Student Government Monday evening.

Barrett explained that keeping the Bucks in Milwaukee is vital to the growth of the city. He said the major concern is finding funding for a new arena, which is estimated to cost about $400-$500 million.

Barrett said there would not be a tax imposed on the residents of the city, like there was when Miller Park was built.

“That was so unbelievably controversial that no one in the legislature is going it touch it again,” Barrett said.

Barrett explained that about $250 million to build a new arena is already in place from past and current owners. Barrett’s plan to cover the remaining cost includes putting a tax on the income of the Bucks players.

There’s been speculation that Marquette, which uses the arena for its men’s basketball home games, may have to put money into construction of the new arena.

“If we can capture that income tax and turn it around to cover the cost of the arena … way this works, is that the state building commission could leverage that for about $130 million,” Barrett said. “All of a sudden we go from $250 to $380, and we are in spitting distance of the cost.”

Barrett also acknowledged the unique relationship between the Bucks and the Marquette men’s basketball team.

“I want to make sure Marquette has a great place to play,” Barrett said. “I want it to be as close as possible to Wisconsin Avenue.”

Barrett previously served in the Wisconsin Legislature and as a U.S. congressman for 10 years prior to his work as mayor of his home city.

Barrett began by addressing how Marquette has made an impact in the vitality of the city. He explained that 23 years ago, the university formed the Marquette Circle, and bought real estate in town to restore the neighborhood reputation after the Jeffrey Dahmer incidents took place.

“It has been a dramatic change from what it was in 1991, largely because of what Marquette did for the city,” Barrett said. “It made Marquette much more invested in the city.”

“Fifty years ago, you only needed two things to succeed: a strong back and a good alarm clock,” Barrett said.

Barrett explained that 50 years ago, the city had the most blue-collar jobs per capita in the United States as well as the highest income per capita, with most of the work coming from the breweries, tanneries and factories. Jobs eventually moved south and to Mexico and China, Barrett said, leading to mass unemployment and a population decrease.

Barrett said “Milwaukee is fighting back.” He added that tens of thousands of young adults are living in or near the downtown area.

“(Milwaukee) is gaining momentum for young people who wanted to live downtown, adds to the vibrancy of the city, the nightlife, more activities and it is a great sign for the future of our city,” Barrett Said.

Barrett believes that adding streetcars to the city is a controversial topic that would help bring a younger audience and grow the population of Milwaukee. His ultimate goal is to implement a system that can reach Lake Michigan, including the Summerfest Grounds.

Barrett explained that he has received two major concerns, that the system doesn’t go anywhere, and that it is a “Trojan horse” plan.

“The latter is correct,” Barrett said. “I want to get it in the ground, and then I want to expand it, because I think for younger people, this is an attractive form of transportation.”

Barrett said over the past couple weeks, there were several incidents around town and the Milwaukee Police Department has apprehended those who were involved.

“If you get a small group of people who are committing robberies or burglaries, they can wreak havoc on several different neighborhoods,” Barrett said.

On behalf of the recent rise in grand theft auto in Milwaukee, the mayor said there is no clear answer, but MPD has a theory.

Barrett explained that after a few incidents of high-speed chases ending in the death of innocent bystanders, the police department does not engage in chases. This has lead to the realization, Barrett said, that there is almost no consequence for stealing a vehicle.