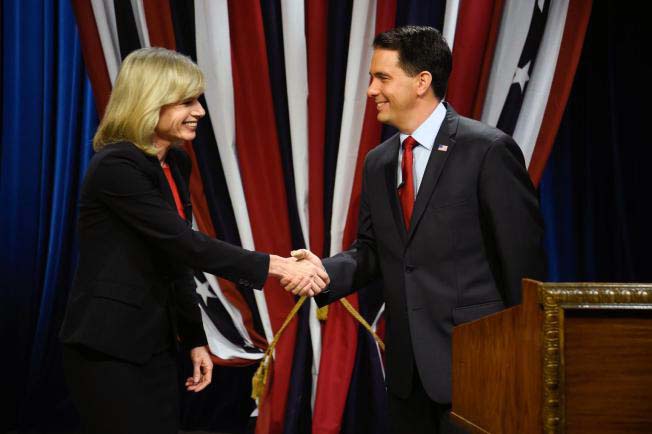 Burke received support from 58 percent of voters from the polling locations on campus, with Gov. Scott Walker (R) receiving 42 percent. The voting wards, including those in the Alumni Memorial Union and the Milwaukee Public Library, serve both students and non-Marquette residents.

In total, about 2,200 voters cast a ballot at these campus locations.

Although Walker beat Burke to retain the governor’s mansion with 52 percent of the vote, Burke swept the polls in Democratic strongholds such as Milwaukee and Dane counties. About 76 percent of voters turned out for Burke in the City of Milwaukee, compared to just 23 percent for Walker.

Similar results emerged on campus for the attorney general race between Democrat Susan Happ and Republican Brad Schimel. Even though Schimel carried the state with 51 percent of the vote, Happ received votes from 74 percent of Milwaukeeans.

Again, Marquette fell between those results, with 65 percent of votes going to Happ.

Burke thanked her supporters Tuesday night while conceding in Madison, and joked about her relationship with Walker.

Walker, in his victory speech in West Allis, focused on themes of individualism and criticized the culture of Washington, D.C.

“In America, we take a day off to celebrate the Fourth of July and not the 15th of April,” Walker said, concluding his remarks.

As expected in terms of Wisconsin congressional delegations, no incumbents lost their seats. The only new face in the Wisconsin delegation will be Glenn Grothman, a Republican state senator who beat out Democrat Mark Harris.

Grothman will fill the seat retired by Rep. Tom Petri, who dominated the heavily conservative sixth congressional district since 1979.