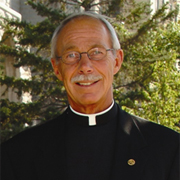 The Church of the Gesu’s pastor, the Rev. John Schlegel, is working to improve the church’s exterior image.

These projects were the first of many Gesu efforts to “be more active in the broader Marquette and Milwaukee community,” Schlegel said.

St. Patrick’s Cathedral in New York was Schlegel’s inspiration for the flags. He also picked the flags to distinguish Gesu as a different entity from Marquette, as a way of saying the church is proudly Catholic in an American democracy and that he likes and supports Pope Francis.

“My parishioners love them,” Schlegel said. “This is a way of branding ourselves.”

Distinguishing Gesu from Marquette shows non-university-affiliated individuals that the church is its own space.

Schlegel said the Papal and American flags are recognition of the Catholic Church’s progression into the future.

“I think most of us can appreciate that the Catholic Church has taken some real hits over the last decade concerning sexual abuse, reproductive rights and LGBT issues,” Schlegel said. “I say that decade has ended … I’m here for dialogue.”

Schlegel noted students and people walking down Wisconsin Avenue may not notice the flags. It amuses him how Marquette students navigate the sidewalk while barely looking up.

“We don’t tend to look up,” Schlegel said. “That’s just the nature of walking.”

Krystal Clayton, a junior in the College of Communication, said she had not noticed anything different about Gesu, other than the American flag hanging.

“When I first saw the American flag, it appeared to be raised half-mast so I thought someone had passed away,” Clayton said.

Schlegel said he never thought he would be a pastor before coming to Gesu, but now he has a focus on what is to come with his new position.

“I had been a teacher and university administrator for 40 years so certainly this is something very different,” Schlegel said. “Coming into the job, there are some expectations that you respect as far as what is already there.”

Schlegel said he’s considering the expectations others have of him, in addition to what previous Gesu pastors have done before, and he’s trying to deliver.

“I did a lot of talking with the parishioners to see which direction they wanted to go, some projects they wanted me to address and now we are just a work in progress,” Schlegel said.

Although students may not immediately notice small exterior changes to Gesu, Schlegel said he still thinks hanging the flags was a success. “They add a touch of class.”