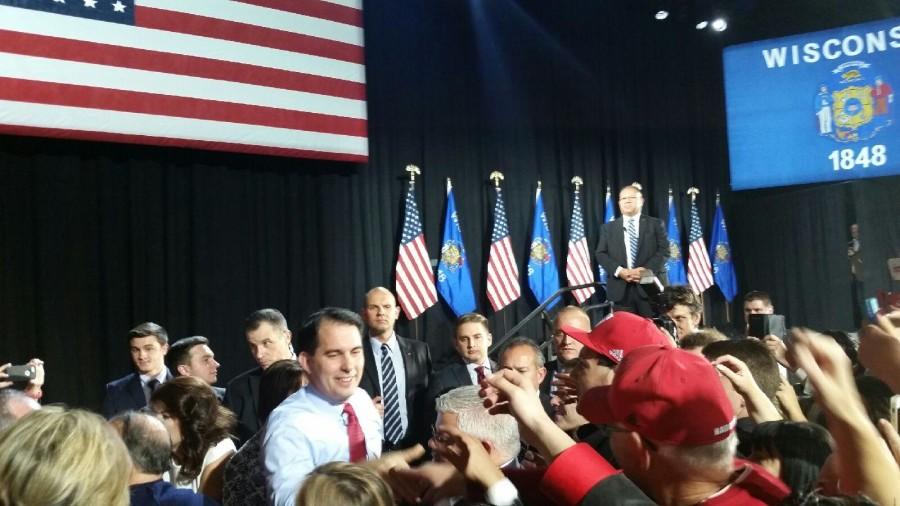 Gov. Scott Walker was declared the winner in the Wisconsin gubernatorial race by most major news outlets, followed by Republican businessman Bruce Rauner as governor of Illinois.

Political science students and faculty gathered in the jPad in Johnston Hall to watch the 2014 elections unfold, and some professors shared their thoughts and the results from Illinois and Wisconsin elections.

“The interesting thing about this election is how wild the interpretations are that have come out of it,” said Karen Hoffman, political science professor and director of undergraduate studies. “Somehow every election seems to be history changing, and I would say it looks like about what we would have expected.”

Hoffman went on to jokingly add, “But these elections will decide 2016, right? But the way that everyone will interpret this will probably be wrong.”

“Elections for 2016 starts pretty much tomorrow or now,” said Paul Nolette, political science assistant professor. “With Walker winning or looking very convincing, if this is anything like his other 6 to 7 precent victories.”

“What’s interesting is that you can definitely craft an argument that two of the most compelling presidential candidates are from Wisconsin, a relatively small state,” Nolette said. “Wisconsin is fairly Democratic leaning but split overall. It’s interesting and important that there are these two Republican candidates, and that they have the ability to win in not-so-friendly territory, and how this really sets up 2016.”

Both Nolette and Hoffman said they were not surprised that Walker won, but instead focused on the effects this election will have in 2016.

“I’m not surprised that Walker won, but I’ll be surprised if he’ll win by how much he looks like he is going to,” Nolette said. “If it’s 7 to 8 percent, that’s quite an argument for Walker (as a presidential candidate).”

Despite a decided swing in the Senate towards a Republican victory, Hoffman cautions that this may not indicate extreme ideological shifts.

“The other thing to remember about this is that the senate races that were up this cycle heavily favored the Republicans,” Hoffman said. “The next cycle will heavily favor the Democrats.”

“It seems as though the Senate is going to be within the range they thought,” Hoffman said. “I wouldn’t call this a wave, though the Republicans definitely had a good year, but nothing to indicate a fundamental shift. There’s still going to be a see-saw effect.”

This Republican win for control of Congress will greatly effect how policy is passed, and cooperation with the president may be necessary.

“Whether or not the Senate will want to work with Obama will be key if anything is going  to get done,” Hoffman said.