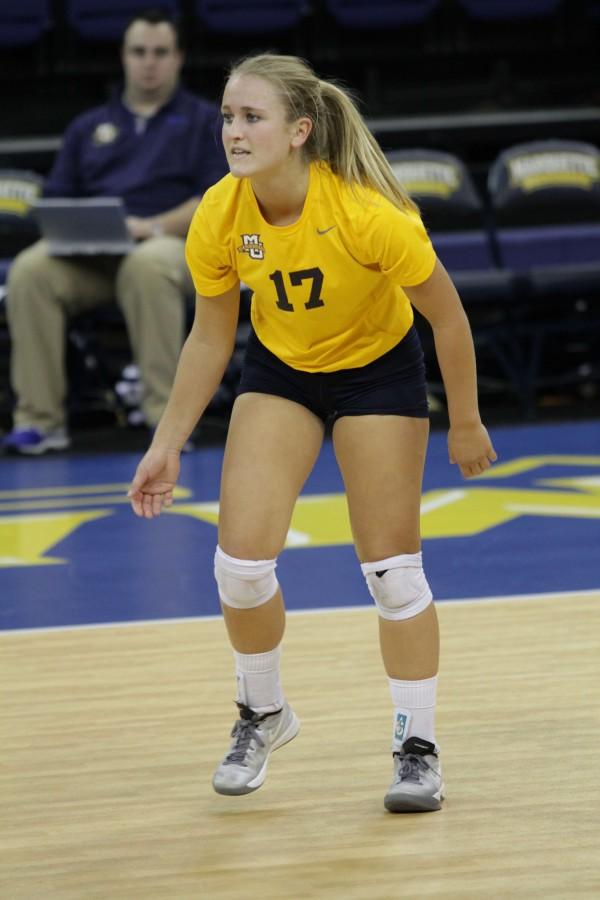 Junior libero Lauren Houg will look to hold down the back line for the new-look Golden Eagles in 2015. (Photo: Valeria Cardenas)

The Golden Eagles (19-6, 10-3) swept both the Butler Bulldogs and Xavier Musketeers during the weekend and are now tied for second place with Seton Hall, as Creighton remains atop the conference standings.

Senior Lindsey Gosh and sophomore Autumn Bailey were acknowledged for their contributions to Marquette over the weekend by being named to the Big East weekly Honor Roll for women’s volleyball. Gosh averaged 3.17 kills per set and had a hitting percentage of .415 over the two games and Bailey had 4.33 kills per set while also accounting for 3.67 digs per game and blocking four shots in each match.

In Friday’s match against Butler, the Golden Eagles wore their opponent down, sweeping the series, 25-14, 25-19, 25-21. Marquette never dominated any set start to finish, but found ways to establish leads through hot streaks. In all three sets, the Golden Eagles had at least one run of four or more consecutive points that gave them a decisive lead or ended the game. After the match, coach Ryan Theis was happy with his team’s ability to close the contest out in three sets.

“I thought we strung three pretty good games together,” Theis said. “It was good to play three straight.”

Gosh led the team with 13 kills, and hit .462 for the the match, while Bailey had 11 kills, including two aces and 13 digs. Butler came in as one of the best defensive teams in the conference, but the Golden Eagles were able to both out-block and out-dig the Bulldogs in the victory.

Saturday’s match was more of the same for Marquette, breezing to a 25-17, 25-22, 25-18 win. The Golden Eagles never trailed and established that they were the better team right away. Bailey and sophomore Nele Barber led the way for Marquette offensively, as Bailey hammered home 15 kills and added nine digs with Barber scoring 13 kills of her own, hitting .440 and contributing 13 digs. After the match, Theis had nothing but praise for the two sophomores.

“We call them the internationals,” Theis joked, referencing the Canandian-born Bailey and German-born Barber. “Typically, successful teams are going to have two good left-side hitters and we’re fortunate to have both of them.”

Marquette will next take on crosstown rival Wisconsin-Milwaukee Tuesday at 7 p.m. at the Klotsche Center, which is just one of the Golden Eagles’ three games this week.