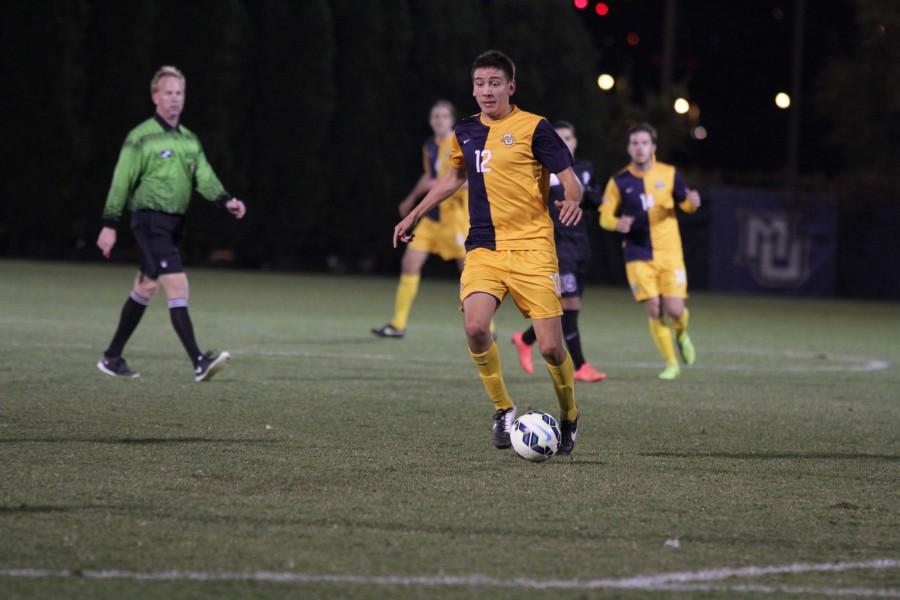 For the second game in a row, the Marquette men’s soccer team fought to a 1-1 double overtime draw, this time against visiting Providence.

The match was long overdue after being postponed Sept. 27 because of travel issues for the Friars. It was also a rematch of the 2013 Big East tournament final in which the Golden Eagles defeated Providence 3-2 for its first Big East tournament title in program history.

Marquette came out slow in the first half and only mustered a few chances. Only one shot was taken and it was blocked. The Friars, on the other hand, started slow but controlled the tempo of the match and created some near chances and capitalized in the 42nd minute.

Providence midfielder Julian Gressel intercepted a poor pass by Louis Bennett II and took it down the middle of the field. With redshirt senior defender Axel Sjoberg in front, Gressel placed the shot between Sjoberg’s legs and wide of diving redshirt senior goalkeeper Charlie Lyon into the side netting for the 1-0 lead.

The Golden Eagles countered with a chance a minute later. Sophomore defender Jake Taylor sent in a cross from the left side but it went past two diving Marquette players.

“First half I thought we came out slow,” said redshirt junior forward David Selvaggi. “We didn’t come out energized like we normally do … we changed up our tactics at halftime and we stated pushing up higher and they were dropping in.”

Halftime adjustments showed early as Marquette started to find its stride. The shots started to pick up and the team found its form. In the 63rd minute, Taylor received a feed from redshirt freshman midfielder Alex McBride and took the ball down the left sideline. From a wide position and a tough angle, he sent in a cross that was intended for redshirt junior forward C. Nortey, but instead found the back of a Providence defender and ricocheted into the net.

“I saw C. making the run to the near post so I was trying to cross it to him,” Taylor said. “It looked like the defender slid in the way and it kind of deflected off of him and went in.”

Marquette continued its free-flowing style of play in the second and dominated possession. The team outshot Providence 7-5 in the second half.

As the match wore on, the physical play increased. In the final minute, Marquette was awarded a free kick just outside the box and with the clock stopped with nine seconds remaining, Louis Bennett II stepped up to take the kick.

His shot flew over the wall, and bended towards the goal, but Providence redshirt senior Kaesel Broome got a hand on it and the ball ringed off the crossbar and the Golden Eagles went to overtime for the second straight game.

The first overtime saw Providence regain the advantage in chances. Two chances nearly resulted in goals. The first came from point blank after Fabio Machado beat redshirt sophomore defender John Pothast, but Lyon again came up with the save and the second came off a cross that was cleared by Sjoberg.

An uneventful second overtime followed with one shot and scarce opportunities for both teams and the match ended in a 1-1 draw. This brings Marquette’s home unbeaten streak to 10 games.

“Once we made the adjustments at halftime, you (saw) a team more indicative of us,” coach Louis Bennett said. “I think when all is said and done, when you look at the shots, you look at back and forth, I think the soccer gods were probably fair to us and to (Providence).”

There is little time to rest as the team returns to Valley Fields Saturday to take on Xavier in a critical conference match at 7 p.m.