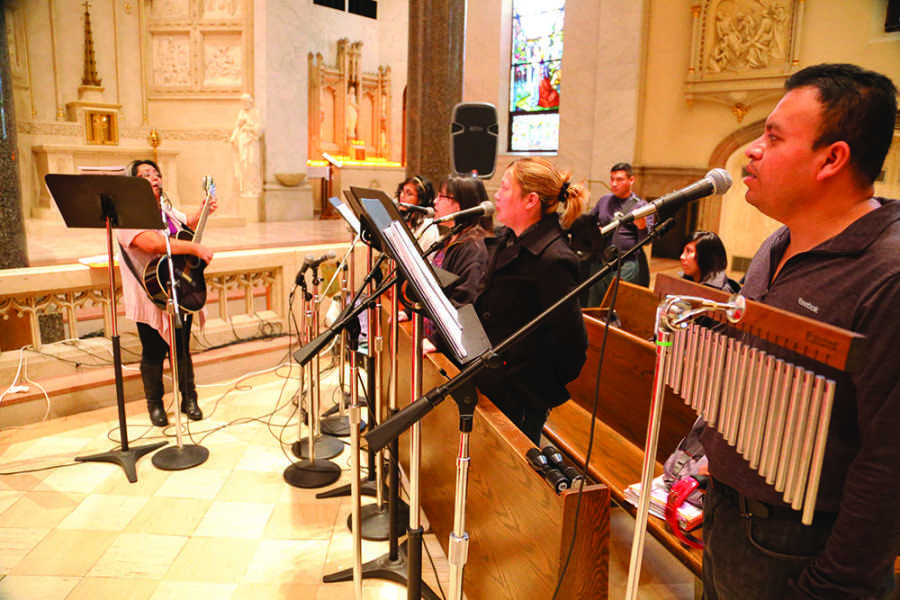 Musicians at Gesu Parish sing in Spanish during a mass in November, the third mass offered in the language by the parish. Photo by Yue Yin / yue.yin@marquette.edu

Maria Rivera, a junior in the College of Arts & Sciences and a Campus Ministry assistant, knows that her position as a Latino Ministry leader acknowledges that there are people with growing needs that need to be met.

“For me, Latino Ministry is an opportunity to put a little bit of me into the Marquette community and trying to help increase diversity not just in numbers, but also in faith,” Rivera said.

Campus Ministry celebrated its first bilingual mass at the Joan of Arc Chapel Oct. 9, and will continue to do so at masses held throughout the school year.

“It’s not that they are two separate concepts,” Rivera said. “Campus Ministry supports Gesu in trying to expand diversity and welcome the Latino community into the Marquette student body.”

Rivera noted that one of the goals of Latino Ministry is to get Latino people “out of the bubble” and make them more included.

“This is the reason Campus Ministry is doing the bilingual masses,” she said. “I think we first started with the idea of a group that focuses on Latino experiences. The Latino community is an increasing population and it is something that we need to be aware of.”

Another factor that contributed to the bilingual mass development was a trip to the University of Notre Dame in Indiana. Mary Sue Callan-Farley, director of Campus Ministry, and two Marquette students attended a Latino conference there and returned with the idea to start a group at Marquette for discussing differences in faith among cultures.

“That had never been done at Marquette before,” Rivera said.

“I think the three of them came back from that conference with the realization of the need and desire for bilingual masses,” said Timothy Johnston, assistant director of liturgical programs at Campus Ministry.

Up to this point, Johnston said most bilingual masses took place only for special occasions, and that they could influence diversity on Marquette’s campus.

“I think it is a growing need that we should be more attentive to on campus,” he said. “It’s not that the university is segregated, but I think what happens is that we don’t know how to make cultures interact with the student body.”

Milwaukee illustrates a much larger trend, both throughout the state of Wisconsin and nationally, of an exploding Hispanic population. For the first time this summer, Wisconsin’s Hispanic population overtook the black population and is now the largest minority group in the state, 6.34 percent of state residents.

In the past decade alone, Milwaukee County saw a 60 percent increase in Hispanics, from 83,000 in 2010 to about 134,000 last year. The population also maintained a steady 2 percent increase each year since at least 2010, according to available U.S. Census Bureau data.

That growth rate is second only to Milwaukee’s Hmong population, which grew slightly faster at an average 2.5 percent per year. Still, the Hispanic population is about four times the size of the Hmong population, so its growth in real numbers is much greater.

This growth is not isolated to Milwaukee. Virtually every county in Wisconsin has seen a substantial jump in Hispanic individuals, with the counties of Dane, Kenosha, Ozaukee and Washington more than doubling in the past decade.

Nationally, the Census Bureau projects that for people under the age of 30, minority race groups will outnumber whites by 2027. It projects the same outcome for people under 40 by 2033. Most of that growth will be a result of the bigger Hispanic population.

The Rev. Matthew Walsh, an associate pastor at Gesu who celebrates the Spanish masses, said offering masses in different languages is a way that the Catholic Church accepts the reality of a growing Hispanic audience.

“People are very pleased that we have taken this step,” Walsh said. “Many of our brothers and sisters from Spanish-speaking countries here appreciate, hear and pray the Scriptures, and sing songs to the Lord in their own language.”

Walsh said he likes having the opportunity to use language skills he developed on mission trips to Central America.

“It’s bringing in some folks who wouldn’t normally come here to the parish,” he said. “It’s another offer that’s trying to do the best we can to address the diversity.”

Rivera said she thinks students will respond positively when introduced to the masses, even if they are not aware of them.

“Once you actually explain to them that what we’re trying to do is remember that God is always reminding us that we are all one family, then they find it very interesting,” she said.

Rivera said the turnout for students at the bilingual masses at the St. Joan of Arc Chapel, which can fit about 70 people, has been positive.

“I remember people were sitting and some were standing, so we have been doing pretty well,” she said. “We are not just trying to gather Latino students at these masses, but students of other cultures and try to make them more inclusive. It could be more welcoming for other students and make them realize that the university wants them to feel at home.”

Benjamin Lockwood contributed to this report.