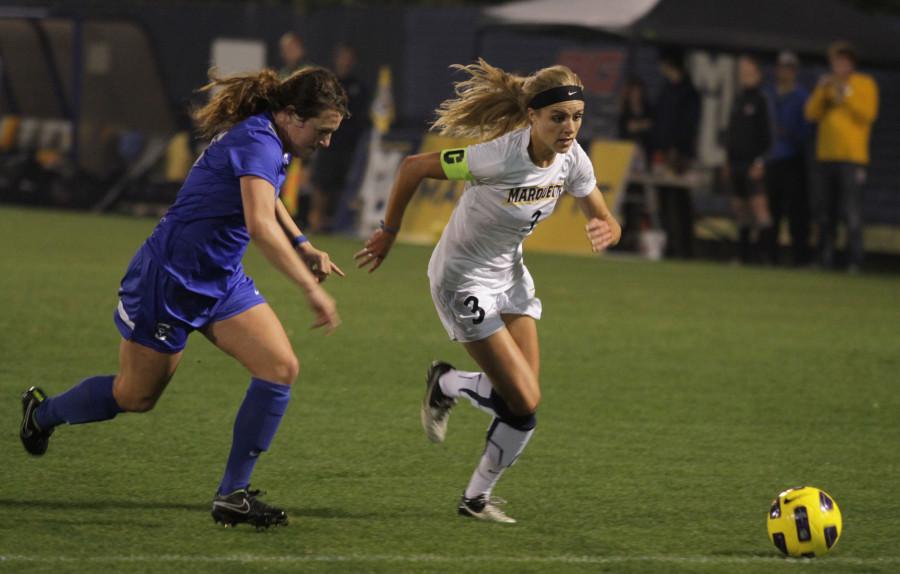 The Marquette women’s soccer team shutout Seton Hall 3-0 Thursday night to kick off the team’s final home stand, but saw a bittersweet end when the Golden Eagles fell to No. 12 DePaul 3-2 in extra time.

The Golden Eagles (8-7-2, 4-2-1) kicked off the two-game home stand in dominating fashion. Marquette was able to dice a Seton Hall defense that only allowed 13 goals throughout conference play for three goals in 90 minutes, thanks to quality crosses into the box, a staple of the Marquette offense.

The team’s first goal occurred when senior midfielder Mary Luba got a free kick on the right side of the pitch in the 21st minute. Luba crossed the ball into the box, where sophomore midfielder Morgan Proffitt was on the far post. She headed the ball right to the waiting Seton Hall keeper, who sent a rebound directly back to Proffitt. Proffitt headed the ball once again, this time getting it past the goalie for the 1-0 lead.

Sophomore midfielder Erin Holland padded the lead in the 35th minute. Senior midfielder Alex Heffron, running down the left wing, crossed the ball into the box, where Holland was standing wide-open near the post. Holland headed the ball into the empty net and gave Marquette a 2-0 lead, which the team carried into halftime.

Shortly after the break, the Golden Eagles once again beat the Pirate defense. Junior defender Jacie Jermier sent a corner kick into the box, and sophomore forward Darian Powell was waiting for the pass. Powell took it and lifted it into the top-right corner of the net for her fourth goal of the season. The three goals were more than enough for the Golden Eagles, as the defense kept the Pirates off the board.

“For us to have scored three goals on (Seton Hall) shows how well we did,” coach Markus Roeders said. “Over the spell of the game, we created good opportunities, and could have even scored one more here or there.”

When the DePaul Blue Demons came into Valley Fields for senior night, the Golden Eagles hoped to duplicate their last result. However, the DePaul defense held Marquette at bay for much of the game.

Because it was the final home game of the season for Marquette, all nine seniors – Sofie Schunk (playing as a position player rather than her normal goalkeeper spot), Mady Vicker, Shalese Miller, Alex Heffron, Haley Fritzlen, Mary Luba, Maggie Edlebeck, Elizabeth Bollinger and Isabela Carrasco – started for the Golden Eagles. The nine, paired with juniors Amanda Engel in net and Jermier, were slowly subbed out for their respective starting counterparts, but held the Blue Demons scoreless.

“We’ve done that for many years,” Roeders said. “I think it’s something they’ve earned. … I thought in the beginning they did a nice job of starting us out.”

DePaul controlled the majority of the first half, though, and spent a good amount of time in Marquette’s defensive third, capitalizing on Golden Eagle mistakes. In the 33rd minute, Amber Paul benefitted from a breakdown of coverage when she headed home a cross from Alexa Ben to give the Blue Demons a 1-0 lead. Five minutes later, Jermier gave DePaul a penalty kick when she took down an attacker in the box. Elise Wyatt took the penalty, and scored on a shot past the diving Engel. The two goals would keep the Blue Demons ahead for the first half, as the defense would not allow the Golden Eagles to get any crosses into the box.

The second half saw Marquette overthrow DePaul for control of the game. The Golden Eagles started to get scoring chances, and the added pressure helped them execute their game plan. In the 61st minute, Powell scored her second goal in as many games as she put home a shot off a failed clearance by a DePaul defender. With the lead cut in half, the Golden Eagles started to swarm.

“We just talked about that we needed to win the second half and the first thing we need to do is score a goal,” Roeders said. “You could kind of see us explode with 29 minutes left and we scored that first one. After that, it was a matter of time to get that next opportunity.”

In the 75th minute, the Marquette faithful nearly witnessed the equalizer when the Golden Eagles got four consecutive corner kicks. However, each one either led to a blocked shot or a clearance out of play. The final went through the box without touching anyone. Despite failing to net four precious opportunities, the Golden Eagles were still knocking at the door.

Luba finally knocked the door down in the 86th minute when the Golden Eagles got a free kick inches from the box. Luba ripped a shot toward the bottom-right corner of the net and tied the game at two. The score would stand as the two teams headed to extra time.

DePaul would ultimately play spoiler, as the Blue Demons capitalized on one final Marquette mistake in the 104th minute. The Blue Demons sent a corner into the box, where Ben chipped the ball over Engel’s head and into the net for the 3-2 victory.

“We just ended up a little short,” Roeders said. “In some ways, the finish is a microcosm of what we’ve encountered this year and we’re still trying to overcome

The Golden Eagles are off until Saturday, when they travel to Rhode Island to battle Providence. Kickoff is at 6 p.m.