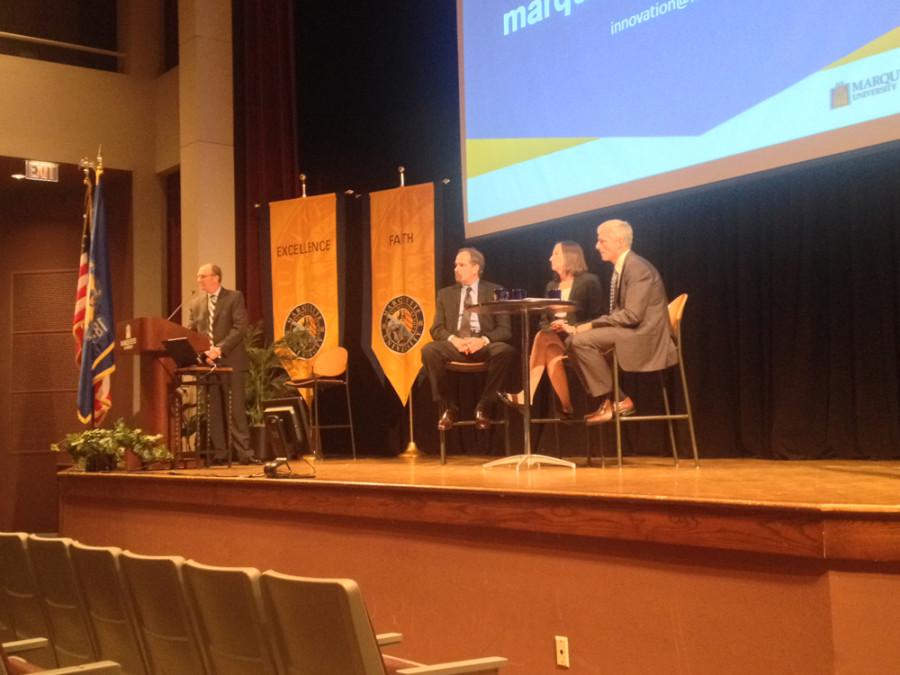 In a panel discussion with university leaders Tuesday, University President Michael Lovell discussed how Marquette plans to encourage innovation on campus to expand into the Milwaukee area.

The event, which was held in the Weasler Auditorium, focused on the creation of a Strategic Innovation Fund, partnerships with the Global Water Center and collaborations with the Innovation Campus in Wauwatosa. These initiatives were all announced in his inaugural address in September.

Interim Provost Margaret Callahan joined Lovell on stage to discuss the innovation fund, which would provide venture capital to students and faculty with ideas for entrepreneurship and research.

The fund contains about $5 million, with $3 million coming from donors and $2 million in the university’s budget. Lovell said he hopes to increase funding through additional donations.

Vice President of Finance Chuck Lamb stressed at the discussion that the application process for funds would have to be simple, requiring a one-page application to be submitted and reviewed by senior administration as well as the Innovation Council and the University Financial Planning and Review Committee.

“There is no penalty for failure,” Lamb said.

During a Q-and-A session, philosophy professor Curtis Carter asked the panel how they would incorporate the humanities in the program. Lovell said the fund will promote interdisciplinary teams because different perspectives are important in problem solving.

Jeanne Hossenlopp will lead the Innovation Council in charge of this program.

Lovell stressed at the discussion that Marquette moving into the Global Water Center is part of the City of Milwaukee’s mission to become a global leader in water research.

“The Global Water Center is a place people are now coming to from around the world to get some of their water problems solved,” he said.

The Center was built in a 107-year-old former warehouse and now houses a number of academic institutions including University of Wisconsin-Milwaukee as well as large businesses and startup companies. Marquette would move into the sixth floor, the last empty space in the building.

Lovell said he wants the students and faculty to help decide how they will use the space.

“It is important that we’re putting our talents and our resources on campus towards helping Milwaukee become a leader in water (research),” he said.

The panel discussed Marquette’s involvement in the Innovation Campus in Wauwatosa.

“I think that this is probably the most exciting initiative that’s going on in the region” Lovell said.

Innovation Campus is a research park that will bring together multiple universities and organizations in order to use their shared resources to solve problems in health care and biomedical engineering among other things.

Lovell said he believes the partnership will give Marquette access to new resources.

“The Medical College of Wisconsin doesn’t have any basic sciences for engineering,” he said. “They’re a graduate medical program. We don’t have medical school physical populations that we can do with research with to a large extent. By merging the two we think both organizations can be much more successful.”