On the road with Brian Regan and his little blue folder 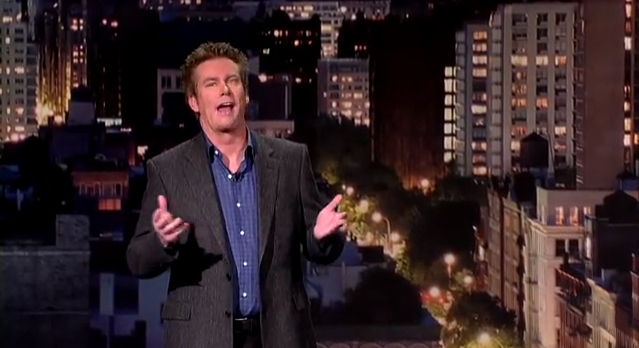 “If you want to hear an adequate comedian tell some adequate jokes, then I’m your man,” Brian Regan jokes, recalling a radio interview he did several years earlier.

“The radio host said, ‘Tell the listeners about your show,’ and I was raised, ‘You’re not supposed to count yourself,’” he says. “So I said, ‘I think I’m adequate.’”

He speaks softly on the phone from his New Hampshire hotel room, trying not to wake his kids sleeping in the other room at 9 a.m. He tries to take them on the road once a month, but he does not want them to get sick of seeing his shows.

“I don’t want them to burn out on daddy’s comedy,” Regan says. “They can watch about five or 10 minutes of a show. I don’t want them to have to sit through an entire show every night. They sit back stage and play games and do school homework and stuff like that.”

Unlike Regan’s kids, audiences across the country do not seem on the verge of “burning out” from his comedy. Year after year, Regan sells out theatres in close to 100 cities, and he is on the grind again this year. Between Oct. 3 and May 30, Regan will play 62 shows in 30 states, including a stop at the Riverside Theatre Oct. 18.

In talking to the Wire, the “adequate” comedian – who released two hour-long TV specials, two CDs and three DVDs and appeared on “The Late Show with David Letterman” a record 26 times – discusses his tour, his writing process, different comedy platforms and a lot in between.

Marquette Wire: This is another long tour for you. How do you keep enjoying it show after show?

MW: How do you see your comedy evolving from tour to tour?

MW: With doing so many shows each year, though, how do you find time to write new material? You must be coming up with stuff all the time.

BR: I always bring my little blue comedy folder – I don’t mean blue like dirty material, I mean blue like the color blue – why I’m sharing the color I don’t know, I’m sure the readers are going to be like, “Oh wow, he’s got a blue folder. You know he’s serious about his comedy if he picked out the color blue.” On my iPhone, I’ve got the little note thing. If you’re walking around in an airport, you can just jot something down. So I’ll always have a little worksheet of new things I want to get to. And I’ll always try to tape every show, and sometimes you do a lot of good writing on stage. You go up there with a rough version of an idea, or even a version that you think is a little better than rough. There’s something about being on stage that forces you to tighten it up, and ya know if it comes out in a way that is lean and mean then I’ll listen to that set and write down that particular bit.

MW: Since you’re on the road when you’re writing, do you first try the new material on stage or do you have a way of trying it before then?

BR: I try it on stage. There is really no other place to do it. I might bounce an idea off my kids just for the goof of it or something, but it’s not like a test to see if I’d do it on stage. Sometimes when you think of something, you want to share it with the people around you. I try to be careful to sandwich it between two other bits that I know will be pretty solid. If it’s a new bit, I’ll try to bookend it. If it doesn’t fly, that’s OK. Audiences will give you a foul ball evey now and then, but if you just keep fouling, audiences will be like, “Jeepers, Mr. comedian, do you have any hits? Can you keep some between the fair lines?”

MW: You’ve been able to make a very good career off stand-up so you don’t really need social media to promote yourself, but have you considered exploring any creative avenues on the Internet?

BR: The world has changed since I first got into comedy. For me, the primary focus is the stand up comedy; that’s what I like to do. The promo aspect of it – I know that’s sort of the deal. There was a time when webpages first came out, and I didn’t have a webpage, and people came up after shows and they got increasingly mad at me going, “How come you don’t have a webpage?”

So I was kind of late to the game with that, and late to the game with Facebook and late to the game with Myspace. I’m late to the game with all of these. I don’t care. I ultimately realize, ‘Ok, it’s time to start doing this or that,’ but I also try not to do things just because you’re supposed to do things. The only reason I’m involed with these social media things is because that’s how people get information now. It used to be years ago you would get a spot on Letterman or “The Tonight Show,” and that’s how people found out about you. They’d say, “Wow there’s this comedian, we saw him on the TV,” and they’d come out and check you out. Now they check you on Youtube, and they check you out on Pandora, so there are all these different ways of getting the information to the people, whether it’s the comedy itself or promos about the comedy. I try to participate, but I’m certainly not at the forefront of that stuff.

MW: If you were just starting out now, do you think you would need to change that approach and put more weight into social media, or do you think it’s still possible for someone to break in how you did?

BR: If I were just starting today, I’d probably be more aware of how you do it today. Whenever you start, that’s when you figure out how you do this. When I started, and I’m gonna date myself here, they didn’t even have VHS tapes. I’m not joking. To book at a club, you had to go to a club to audition. So I’d buy these Greyhound bus passes, and I’d look at a map and I’d say, “What’s the closest comedy club to here,” and I’d hop on a greyhound and take like a five, six, 10-hour bus ride to that city and audition there.

After I got my foot in the door and started working at places, I remember people talking about, “You know you can just send in a VHS tape now to clubs,” and I’m like, “Man, is that easier!” Now the idea of having to schlep on a Greyhound bus to go somewhere, I don’t even think that exists. I did what I had to do when I started because that’s what you had to do.

MW: Do you still get excited to go on the Late Show after so many (26) appearances?

BR: Sure – oh, yeah. You’re still going out to millions of people. It’s a big deal to walk out on that stag. There’s a huge excitement to it. Even though I’ve been fortuntate enough to do a handful, it’s still a blast. It’s still nice to have people come up and say they saw you on Letterman and say they liked it or whatever. And also you don’t want it to go poorly either because a lot of people are going to see that too. So you get a little nervous before you go out there, but that’s the fun of it.

MW: You’ve received a lot of praise from other comedians. Patton Oswalt called you the best stand-up working today. Jerry Seinfeld said you’re one of his favorites also. What does that kind of praise mean to you?

BR: It means everything to me. I don’t do my comedy to try to please other comedians. I’m doing it just to do stuff that I like, that I think people will like. I want everyone to like it. I want audiences to like it, but I’m also happy that comedians like it. When people who do what you do say you’re pretty good at it, it’s like the ultimate compliment. So yeah, to have people of their caliber throw nice words my way is a huge honor.