Marquette without aid for study abroad amid rising participation 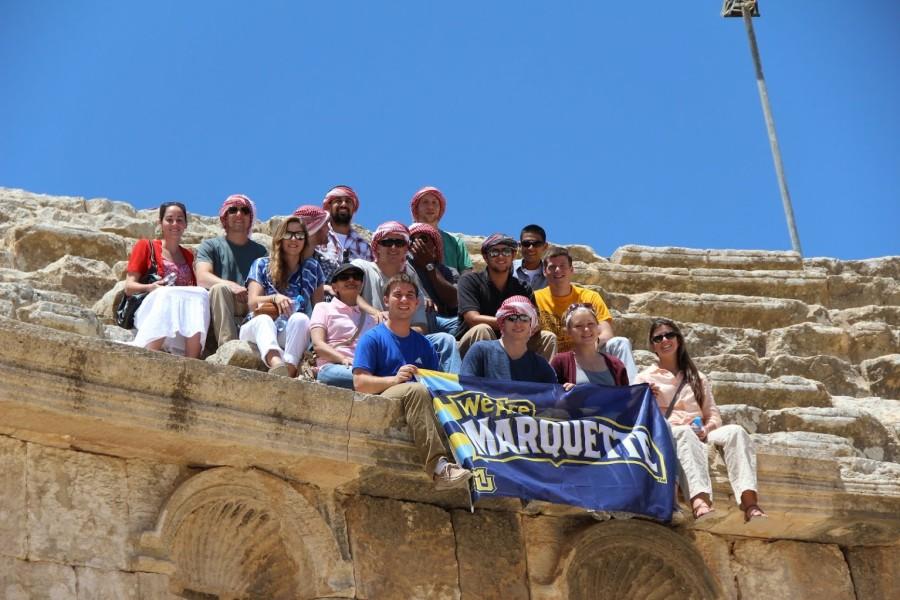 Students pose with a Marquette banner while studying in Jordan. Photo courtesy of the Office of International Education.

The application cycle for Marquette’s spring study abroad programs officially closed last Wednesday, resulting in a final applicant pool with a record high of 292 applicants and continuing the upward participation in the programs.

For the majority of these applicants, whose acceptance letters will go out on Oct. 10, this the first step in what is often described as one of the most exciting journeys a student can have as an undergraduate.

But for a select few, the financial pressure that comes with studying abroad forces them to put off their global education–and it doesn’t help that Marquette does not offer any scholarships specifically for studying abroad, unlike many other schools in the region.

Every year, a handful of students will begin and even complete the study abroad application process, only to decide to remove their names from the pool, either by withdrawing their applications before acceptance decisions are made or by declining an offer to study abroad.

For each withdrawal, the Office of International Education, which coordinates study abroad programs, requests a brief statement explaining the status change.

In some cases, a student will realize or feel that they do not meet certain requirements, such as language proficiency, to succeed in the program. Other students will have a change of heart and decide they want to study somewhere else, or hopefully, during a different point in their academic careers.

In the fall semester of 2009, 75 percent of first-year students predicted they would participate in an international experience, such as study abroad. That number has remained fairly steady during the last couple of years, with only a slight dip to 68 percent in 2013.

From 2009 to 2013, however, graduating senior surveys have shown that only about 35 percent of seniors leave Marquette with international experience under their belts.

Coordinators in OIE and students who took part in the programs said participation would likely increase if scholarship aid was offered by the university. 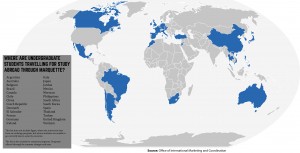 A student’s financial aid package often covers a significant portion of the costs to study abroad, depending upon the student’s package as well as the program they choose to attend.

It is important to understand what costs are associated with a semester abroad. By the start of each academic year, OIE’s study abroad team will have prepared an exhaustive budget sheet with all the costs associated with each program, sponsored also by the Office of International Business.

The first cost is the most important: tuition.

With few exceptions, every international program begins with a base cost of approximately $17,740. This cost, paired with a health insurance cost of about $144, is billed by Marquette, the same way tuition is billed for all other students remaining on campus.

After tuition and insurance, costs between programs vary significantly. For reference, the costs associated with attending John Cabot University in Rome — one of the most popular destinations among Marquette students — are estimated based on official costs provided by John Cabot as well as ballpark figures reported from previous years.

Living costs in a study abroad program are similar to the living costs a student — especially an upperclassman living off-campus — will undertake. However, while students at Marquette are able to offset many of their day-to-day expenses by taking advantage of work-study programs or finding employment around Milwaukee, the same opportunity is difficult to do because of visa restrictions.

Coupled with major differences in living expenses between the United States and a different country — especially those in Europe — it is generally the costs of living, not academic costs, that end up putting a semester abroad just out of reach for many interested students.

“In Spain, nothing was terribly expensive,” said Jeff Ocwieja, a senior in the College of Arts & Sciences who studied abroad in Madrid in 2012. “But after a while I did feel that I had to curtail some of my spending, especially when it came to some stuff that I wanted to do or go see, like visiting more museums or cultural events. If I had been able to get more funding from the university to go, I would have had more disposable income there to immerse myself more in the culture.”

Katie Turek, a junior in the College of Health Sciences who is currently studying in Chile, also said living expenses can take a toll on a student’s wallet.

“Any extra money certainly helps, especially with living expenses here,” Turek said. “It would make extra traveling and participating in activities outside of class less cost-prohibitive.”

Despite holding over 65 international partnerships in 27 countries, Marquette does not currently offer any internal scholarships for students going abroad.

On the other side of town, the University of Wisconsin-Milwaukee’s Center for International Education offers a significant amount of scholarships and grants to offset study abroad costs, including the Wisconsin Study Abroad Grant, which is funded by the Wisconsin state legislature and awards up to $2,000.

The Center for Latin American and Caribbean Studies also offers several scholarships and fellowships, including the Donald R. Shea Scholarship, which provides $500 awards for use with programs abroad.

Of course, there are significant differences between a public state school and a private Jesuit school, namely that UWM can pass along state-funded scholarships to its students while Marquette relies on private donations. Still, other Jesuit schools across the nation offer at least one internal scholarship for the purposes of studying abroad.

Loyola University Chicago offers seven different scholarships for its John Felice Rome Center program alone, with awards of up to $7,500, funded by alumni of the program and the Loyola Board of Trustees.

At Fordham University in New York, the Department of Modern Languages and Literatures offers the $1,500 Alfred A. Puglisi Award for students looking to study in Italy. The school also offers the Leahey Renaissance Student Award and the Tobin Travel Fellowship, each worth $5,500, as well as the Fordham College at Rose Hill Study and Service Abroad Scholarship, worth up to $10,000.

The University of Scranton offers three internal scholarships: the biannual $5,000 John Corcoran scholarship funded by the Friendly Sons of St. Patrick; the Provost’s International Study Grant, which varies per student; and the Denise Dubbels Memorial Scholarship, also variable, which is funded by Scranton students and faculty in memory of a deceased honors student.

The list goes on. Schools that lack even one internal scholarship, like Marquette and Creighton University, are not the norm.

OIE does promote national study abroad scholarships, such as the Benjamin A. Gilman International Scholarship, the Fulbright Scholarship and the David L. Boren Scholarship, but that only goes so far.

Within the office, Price is one of the most vocal proponents for Marquette-specific study abroad scholarships.

“University-sponsored scholarships allow broader access to study abroad opportunities for all students,” he said. “With additional expenses such as airfare, an endowed scholarship for study abroad would help students offset any extra costs.”

‘WORTHWHILE INVESTMENT NO MATTER WHAT’

In 2013, 82 percent of respondents to the graduating senior survey who took part in an international program said the experience had a significant impact on their overall education, the highest positive response out of any category.

Studies also continue to show that students who travel abroad became more conscientious and empathetic towards world issues and benefit from an increase in emotional stability. These students also can improve foreign language skills.

“I think that travelling and witnessing new cultures is a worthwhile investment no matter what,” said Ocwieja, reflecting on his time abroad. “I was willing to assume the cost of studying abroad because I felt it would be an experience that couldn’t be beat. However, if a scholarship would have been offered I definitely would have taken advantage of that.”

As evidenced by its fellow Jesuit institutions, the most effective way to institute an internal study abroad scholarship would be to look for donations from Marquette alumni and other private donors. One of the categories for scholarship donation at Marquette is Opportunity and Access, which looks to provide aid to historically underrepresented students, such as low-income and first-generation students.

“I imagine that more students would apply for study abroad programs if scholarships were available,” Turek said. “I am fortunate enough to be receiving significant scholarships towards my tuition already. If Marquette did offer study abroad scholarships, I would hope that students who would otherwise be unable to go would receive them.”