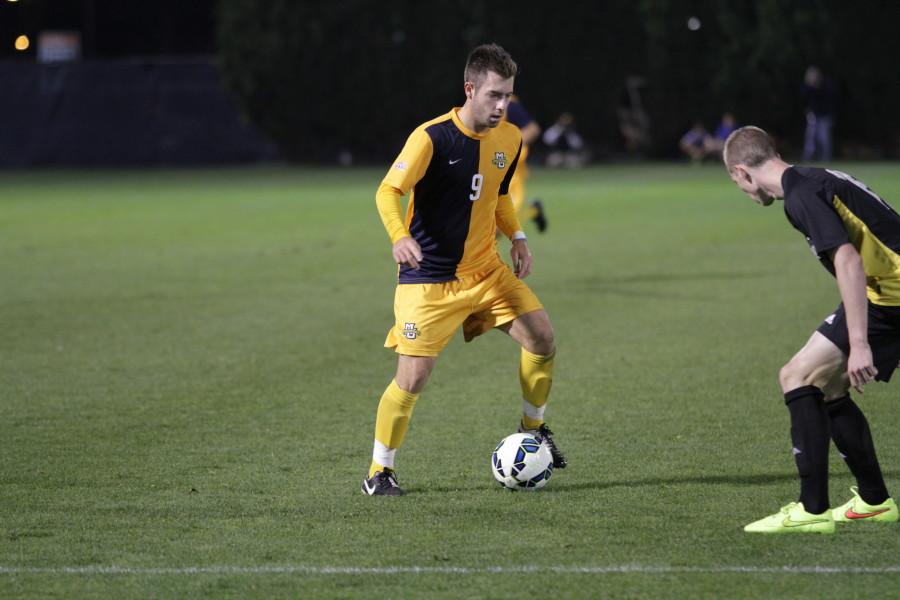 No. 12 Marquette (6-2-0) won six games in a row and has not given up a goal at home in 651 minutes. Redshirt senior Charlie Lyon was in net for every match, and with his 26th shutout last night, he is now two clean sheets away from the school’s all-time record.

Wisconsin controlled play early on in the match, testing Lyon with four quick shots in the opening minutes. However, the momentum began to swing in the Golden Eagles’ direction around the 20-minute mark. The back end shut the Badgers out of any more dangerous chances, and the offense took more shots than it had all season.

Both Nortey’s goals were the final touches of excellently executed passing play. On Nortey’s first goal, redshirt junior defender Axel Sjoberg tipped a throw-in to redshirt senior David Selvaggi in the box. Selvaggi put the finishing touch on the play with his cross to Nortey, who had a wide-open net to shoot at.

Marquette’s defensive unit was involved in the second goal as well. Junior Adam Hermsen’s long pass hit sophomore forward Coco Novarro perfectly in stride on the left side. After gaining complete control Novarro crossed to Nortey, who finished the play in the same fashion as his first.

“Everybody put in the work,” Nortey said. “It just happened that I scored the two goals, but anyone could have scored those goals. We do that in practice every day.”

“He does so much work,” head coach Louis Bennett said in regards to Nortey. “We purposely had him go through two defenders so he would draw both of them. He never complained, he just did his due diligence.”

Marquette had 22 shots Wednesday night, topping its 18 against Gonzaga as its highest single-game total.

“I thought it was probably the single-best performance we’ve had all year,” Bennett said. “We were sat down and watching a great game. We didn’t have to do much.”

“In the beginning it was a little bit hectic, and we couldn’t really implement the style we wanted,” Bennett said. “We corrected it. That’s the way you’ve got to (play). That’s going to happen in some games. You’ve just got to roll with it.”

Bennett believes the high frequency of scoring chances were the cause of the full squad’s play.

“Our movement off the ball and our ability to go from one side of the field to the other (created chances),” Bennett said. “It was our patience at the back. When we did break pressure we broke pressure with support to keep the ball.”

Lyon made three saves in the victory, while redshirt sophomore keeper Casey Beyers made five saves for the Badgers.

While one Golden Eagle returned, another will be sidelined. Senior midfielder Sebastian Jansson entered in the 72nd minute, the first time he’s seen game action since suffering an injury in the Gonzaga match. However, sophomore forward Nick Parianos could miss significant time after suffering an undisclosed injury. He’s listed as out indefinitely.

The Golden Eagles are back in action Saturday, when they head to Washington D.C. to face Georgetown. The match will be their first of the Big East slate after their game against Providence was postponed.