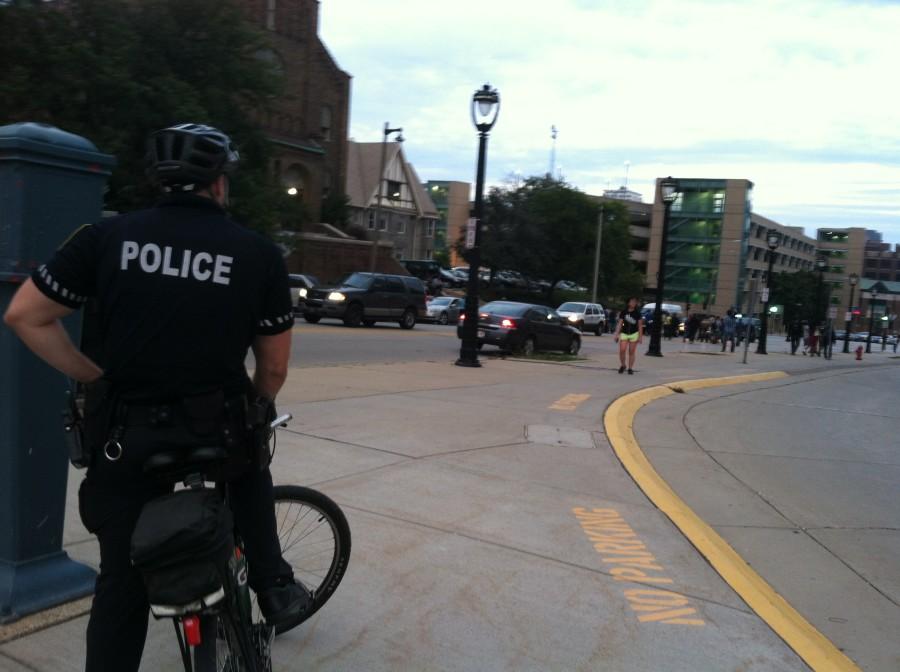 Police on the scene of Dontre Hamilton related protests on Kilbourn Avenue near Marquette's campus Photo by Rob Gebelhoff / robert.gebelhoff@marquette.edu

Police activity is under tremendous social scrutiny in recent months following explosive events in Ferguson, Mo., Milwaukee and across the country.

This effort reflects a greater desire to minimize the incidence of police brutality and ensure the safety of citizens. That desire from Marquette led to Gov. Scott Walker signing a bill into law allowing the university the option of granting the Department of Public Security police powers in April, the same month of Hamilton’s shooting.

This last week, the issue resurfaced on campus; student demonstrations in the Alumni Memorial Union chanted Hamilton’s name in protest of the shooting back, proving police treatment is clearly a current poignant issue in Milwaukee and at Marquette. More protests ensued Wednesday night near Marquette’s campus.

As the most segregated city in the U.S. with extremely high crime rates, Milwaukee requires efficient and effective police officers. If DPS was to gain police powers, it could mean less strain on the Milwaukee Police Department to address crime in the neighborhoods surrounding campus. More resources and manpower would logically equate to the better management and minimization of crime.

But what police powers means for DPS remains rather unclear. While the goal of service and protection would not change for DPS, its functions and obligations outside of Marquette’s campus might.

Paul Mascari, director and chief of DPS, said in an email “the mission of Public Safety will not change if the decision is made to become a police department.” In theory, the only difference would be that “all public safety officers would have to meet the state-mandated requirements for certification as a law enforcement officer.”

That degree of training will take some time to achieve, and Marquette has yet to decide if DPS will become an official police force.

Marquette Student Government will host an open forum on the issue Oct. 27, and that dialogue is crucial to determine the future of public safety on campus and the greater Milwaukee area. Students, faculty and alumni should voice their opinions on the role and scope of DPS at Marquette and the surrounding community. This input would help solidify DPS’s overall mission moving forward, and innovative ideas could alter the new structure of a safety department with police powers.

Before this decision, every member of the Marquette community needs to know the legal implications of a police force on campus. Many are unable to discern between the capabilities and authority a DPS officer has versus that of a police officer, and this difference affects the legality of officials’ actions on campus as well as student behavior.

Maintaining the overarching goal of service and safety is the laudable aim of DPS, and any and all steps that advance that goal should be taken. But Marquette should not choose to grant DPS police powers before it first understands the practical implications of such an action, and as Hamilton’s death proves, safety and service are not an absolute with police activity.