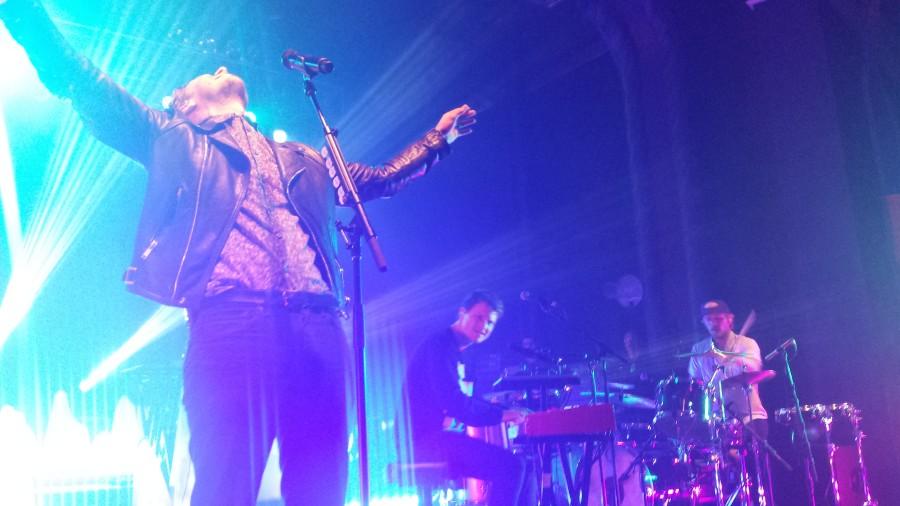 Mark Foster and company kept young and old dancing Saturday night at the Eagles Ballroom at Foster The People’s final tour stop for the summer in support of their recently released album, “Supermodel.”

The show started with opening act The Velvet Teen, a band Mark Foster, lead-singer of Foster the People, later called “one of his favorite bands for a very long time.” Unfortunately, the crowd did not seem to feel the same admiration. A couple of songs into the half-hour set, front man Judah Nagler asked the obligatory question, “How are y’all feelin’ out there?” which was followed by a cheer with as much enthusiasm as you would expect from high school students at a mandatory assembly about abstinence.

When Nagler followed that up by saying “Is anyone out there?” he received about the same response. The Velvet Teen received no healthy applause until the musicians asked the crowd if they were ready for Foster The People and announced their last song of the night.

Nagler’s voice is clear on the band’s three full-length LP’s and six EP’s. However, his live performance was drowned out by the classic punk rock setup of two loud, cutting guitars, a bass player and a drummer. Together, they sounded disorganized, like each member played whatever he felt like while Nagler mumbled his way through set lyrics to the point where fans screamed at him in unison to turn up the microphone.

When The Velvet Teen mercifully left the stage, chants of “Foster! Foster! Foster!” began, with every mic check and flashing light sending the crowd into even more of a frenzy. The band could have come out with only a glockenspiel and Foster’s voice, and the fans would have thought it was the greatest thing they ever heard.

The band entered to sci-fi-sounding spaceship music and a multilevel stage setup, complete with mountain-like decorations that looked like they were plucked from the set of Rudolph the Red-Nosed Reindeer and combined with a kaleidoscope. The majority of the light show consisted of a combination of teal and purple, the same color scheme as the “Supermodel” album cover, with intermittent rainbows and solid colors to portray different emotional backdrops.

Despite the trip to the Eagles Ballroom being the group’s first in Milwaukee, the crowd had an obvious long-term love affair with its infectious, synth-laced sound. At the beginning of the set when Foster exclaimed, “What’s up Milwaukee? Nice to finally meet you,” the crowd exploded, reminiscent of that girl you had a crush on in high school finally saying hi in the hallway.

If the alternative pop-rock band’s set could be described with one word, it would be inconsistency. The band opted to turn away from its usual synthesizer-heavy setup to use more “traditional instruments,” trading in keyboards for guitars. Although bringing something different from album recordings seemed like a good idea in theory, the guitar sound fell flat at times.

For example, one of the new singles, “Coming of Age,” had powerful, infectious vocals from Foster, but the guitar sound did not have the same dream-like floati-ness it did in its recorded version.

The band did not have to do much work in hypnotizing the near-capacity crowd, already infatuated with the band ever since the 2011 release of Foster’s debut album “Torches” and its mega-hit “Pumped Up Kicks.”

After playing songs from “Torches” for the better part of three years, the band was clearly more than willing to rush through those songs to get to play tracks from “Supermodel.”

Even during the encore, playing “Pumped Up Kicks” seemed more like a tedious task than a musical piece they enjoyed performing, despite it being by far the most popular song for the crowd.

One of the most interesting parts of the night, aside from the music, was the eclectic crowd. Look to the left, and you saw an eight-year-old boy with ear plugs mouthing the words to “Miss You.” Look to your right, and you saw a man in his 70s imitating Foster’s quirky, heel-clicking dance moves. The demographic makeup of the crowd for Foster The People’s dream-like pop-synth was one of the most diverse the Eagles Ballroom is likely to ever see.

Foster left the crowd with parting words of wisdom, directed at the “kids” in the front rows, who he said would have “just started school.”