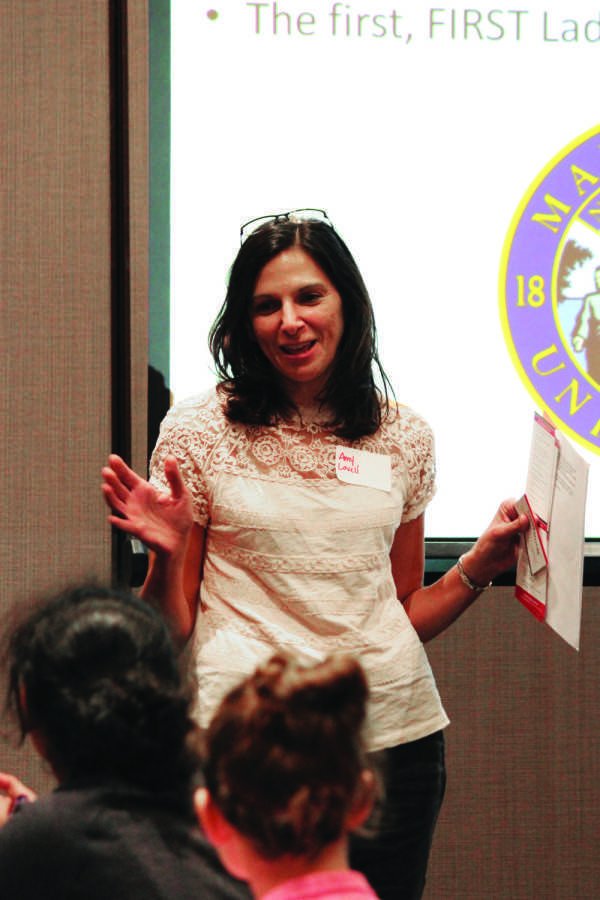 Amy Lovell was named a community leader of the year.

In honor of World Suicide Prevention Day, Marquette’s Active Minds chapter hosted its first meeting of the semester Wednesday, with an appearance from Amy Lovell, wife of University President Michael Lovell and co-founder of the REDgen charity.

The meeting, held in the Alumni Memorial Union ballroom D, drew more than 40 students for an introduction to Active Minds and what it does nationally and on campus. Students also gathered to hear Amy Lovell speak about her involvement with suicide prevention.

Markie Pasternak, president of Marquette’s Active Minds chapter, set the mood for the meeting by playing upbeat music as students came in.

“This is probably the largest meeting we’ve had in a long time so I am very proud,” Pasternak said to the attendees.

Pasternak followed her introduction with a video showing Alison Malmon, the founder of Active Minds, who lost her brother to suicide when she was in college. Then Lovell took the stage to speak about her past experiences with mental health.

“I was a pharmacist and I worked in the psychiatric hospital for several years in medication education,” Lovell said. “I have always been passionate about mental health.”

Reflecting on the term “mental health,” Lovell brought up the stigma she sees connected to it.

“Why does it have to be separated as mental health and not just health?” she said.

Lovell’s involvement in suicide prevention and resiliency came from personal experience in the summer of 2013. “One of my 13-year-old daughter’s closest friends took her life and it rocked our family’s world,” Lovell said. “There’s no grief like suicide grief.”

“I actually rewrote QPR for teenagers because it was too long and not as interactive as it could be.” She offered QPR cards for students to take with them.

Lovell said she’s willing to help Marquette in any capacity needed. “I would support any function and be willing to go to any events,” Lovell said. “(I’m) excited to be here and to get to know students.”

Pasternak is eager to see what the year will bring. “Active Minds is a growing organization on campus and I believe the Lovells, the Counseling Center and many other people at the university want Active Minds to be a very powerful club here,” Pasternak said. “We are looking for mental health to be an issue that we can talk about here at Marquette.”