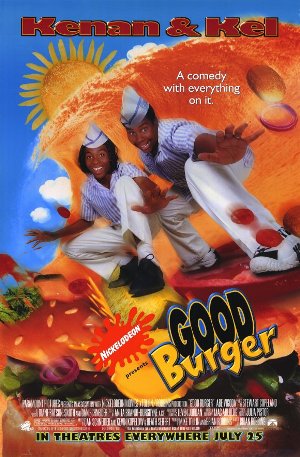 “Welcome to Good Burger, home of the Good Burger. Can I take your order?”

For our generation, Nickelodeon movies of the 90s represent nostalgia at its finest. We think back to Kel’s orange soda cravings in “Kenan & Kel.” We reminisce about kids getting slimed on “Figure It Out.” Naturally, we cannot forget about the home of the Good Burger. “Good Burger” gives us a lot to look back on, reminding us that we are never too old to feel like a kid.

The film tells the story of a high school student in desperate need of a summer job. Dexter Reed (a young Kenan Thompson of “Saturday Night Live”) stumbles into a Good Burger fast food restaurant in the middle of a bad day. Serving Dexter is another teenager named Ed (Kenan’s partner-in-crime, Kel Mitchell).

Ed is widely known as an airhead, always seeming to be a step behind the rest of the Good Burger crew. Yet, he somehow manages to get Dexter a job at the burger joint. The two end up joining forces as Good Burger, in the midst of its financial success, is faced with a problem: a new restaurant, Mondo Burger, opens across the street, drawing all the customers away from our beloved friends at Good Burger. Mondo Burger is run by the nasty, hard-edged Kurt Bozwell (Jan Schwieterman), who sets up a sweatshop-like assembly line for his employees. Together, Ed, Dexter and the rest of the Good Burger staff must make sure that Good Burger does not fall “into the grinder” in the face of their heated competition.

The greatest thing about “Good Burger” is that the humor is not made for a specific audience. Both kids and adults can enjoy this film. The jokes are multi-dimensional, allowing people of all ages to have a laugh.

However, one element aimed at adult viewers is the movie’s cameos. When Ed and Dexter find themselves in a mental institute, they break out into a hilarious dance sequence to “(Not Just) Knee Deep” by Funkadelic. In the crowd of lunatics, writer and lead singer of the song George Clinton appears, sporting his funky dreadlocks. Otis, who plays the mysterious fry cook, is Abe Vigoda of “The Godfather.” Famous comedian Sinbad also makes an appearance as Dexter’s afro-obsessed high school teacher.

The humor in “Good Burger” is so outrageous that I almost felt too old to be laughing, until I realized that is exactly what director Brian Robbins wants us to do. Of course, it is silly to see Ed splashing around in the milkshake machine, but that kind of humor that brought me back to my childhood. Singing along to Ed’s “I’m a Dude” song can bring out the five-year-old in any viewer. Giant hamburgers, flying ice cream and broken mailboxes all add on to the nostalgic magic that lays within the film.

The movie provides a nice break from reality by bringing back the same jokes I laughed at 15 years ago. Pouring the adult humor on top of that leaves no room for a dull moment. Yes, it is stupid humor. What else do we expect from a Nickelodeon movie?

It is easy to get caught up in the stresses of adulthood. Laughter is the best way to relieve stress, and “Good Burger” supplies all audiences with plenty of humor. Not too many Nickelodeon films stood the test of time, but this one continues to entertain more than 15 years later. “Good Burger” is the perfect film suitable for anyone who needs a 90 minute escape from the stresses of adulthood. No matter how caught up we get in the strains of reality, there’s always room for nostalgic laughter.