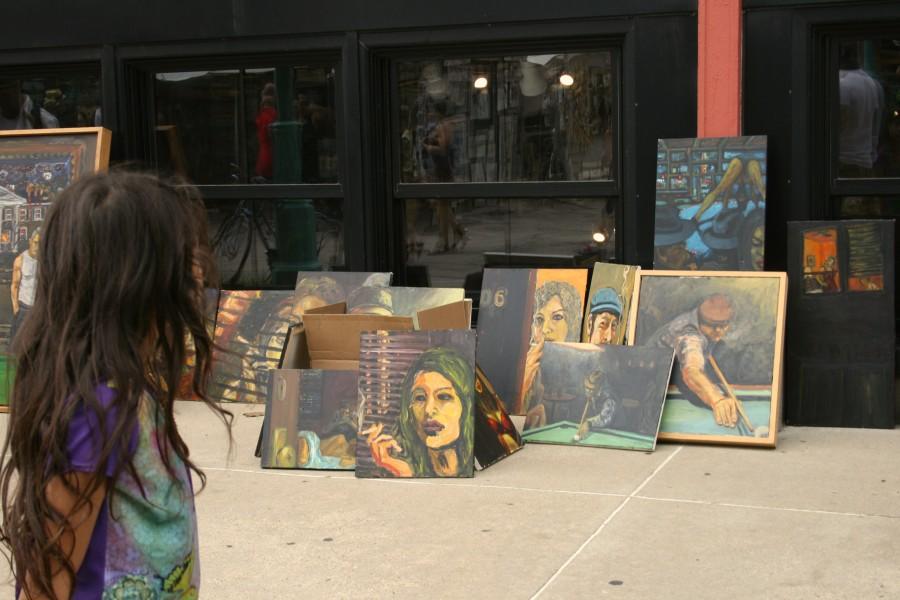 The Third Ward Art Festival features artwork and artists from all around the country.

Dozens of white tents sprawled down two blocks on Broadway Ave. in the Third Ward, each filled with art more different and creative from the next. Some tents housed handcrafted jewelry and life-sized sculptures. Others were covered from top to bottom with brightly colored canvasses.

The Historic Third Ward hosted the third annual Third Ward Art Festival last weekend, sponsored by Amdur Productions with its conjunction with the Historic Third Ward Association. Approximately 130 artists from across the country participated in the art festival. Even the Saturday’s sporadic rain could not keep art lovers indoors and away from the festivities.

Nancy O’Keefe, the executive director of the Historic Third Ward Association, described the first day of the festival as a “strange day” because of the weather.

“I lived here all my life, and I’ve never seen weather like that,” O’Keefe said.

While the rain forced people to shop and dine inside, the festival was not canceled due to weather conditions.

“(The rain) did put a little damper on (the festival), but we were all troopers,” O’Keefe said. “These artists are used to this because they go all over to different art festivals.”

The sun came out for the final day of the festival, bringing people outdoors to marvel at art while enjoying the acoustic sounds of local musicians.

Amy Amdur, the director of the Third Ward Art Festival, was responsible for producing the festival, which she said could be a difficult process.

“A show like this is really complicated because we only have so much space to work with, and we only have a few hours to actually set the show up,” Amdur said. “We run all the aspects that the public doesn’t really think about, like making sure (the festival) stays clean and making sure it’s safe.”

According to Amdur, the Third Ward Art Festival has a competitive application process. In order to qualify for the festival, artists are required to send four images of their work, one showing what their booth will look like. The images and art have to be original art made by the artist. Previous award winners from the festival are automatically welcomed back without the application process.

Local Wisconsin artist David Harrison was one of the fortunate applicants. His life as an artist started with his mountaineer career when he was taking pictures from around the world.

It was when Harrison looked at his collection of photographs and discovered how to use Adobe Photoshop that his career as an artist took off in 2003. He said his time in the mountains became the source of content for his art, and the inspiration comes from seeing how people can enhance photos.

The festival does not assign specific themes for the art each year, but has six categories that include painting, photography, 2-D work, jewelry, 3-D functional and 3-D nonfunctional.

“We let the art establish the festival,” Amdur said. “Some years, you see more paintings, some years more glass. It depends on who the best people that are applying.”

Amdur and O’Keefe agreed that the Third Ward is good place to host the festival because of its layout and local shops.

“It’s so great here because the street is so cool, and the sidewalks are so broad and the street cafes make it a really cool place to have a festival,” Amdur said.

“The Third Ward is known as the art and fashion district,” O’Keefe said. “We have 35 galleries, we have the Milwaukee Institute of Art and Design, (and) we got the Art Institute. It’s just an artsy neighborhood. It’s a cool place for all the artists to hang out and you just find nice art.”