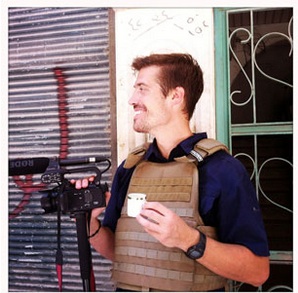 Foley, a 1996 Marquette graduate, worked as a journalist in Libya, Afghanistan, Iraq and Syria 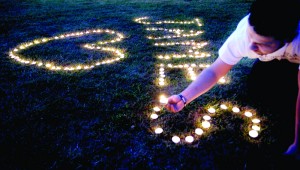 Candles are lighted on the town common during a vigil for James Foley in his hometown of Rochester, N.H., Saturday, Aug. 23, 2014. Foley, a freelance journalist, was killed earlier in the week by Islamic State militants. He was abducted in November 2012 while covering fighting in Syria. Photo by Jim Cole / Associated Press.

Students and Gesu parishioners offered prayers Sunday for Foley and his family, noting that at one point, he worshiped in the Church of the Gesu himself.

Foley, whose whereabouts had been unknown since he went missing in Syria in 2012, is now the namesake of a new scholarship fund organized by the university for a communications student who might otherwise be unable to attend Marquette.

“He seemed to me a warm and gentle soul,” said John Pauly, journalism professor and former provost of the university.

Pauly had the chance to meet Foley when he visited campus in 2011 to speak at a Nieman lecture about his experiences being captured on a separate occasion while reporting in Libya.

“By the nature of their work, journalists sometimes find themselves in harm’s way, and I appreciate their willingness to accept those risks,” Pauly said.

“It is a terrible tragedy that offers everyone a moment to pause,” said Stephen Clarke, a Marquette Law student. “Even though most people here might not have known him personally, I think his death strikes a chord with students and professors alike.”

The execution, apparently in retaliation for American airstrikes against the Islamic State, may have been predicted by U.S. officials. Politico reported that earlier this year, there was an attempt by American special operations to rescue Foley and other hostages. Unfortunately, due to faulty intelligence, the hostages were not located where military officials thought.

In the video posted to YouTube Tuesday afternoon and since confirmed by the White House, Foley is shown being beheaded by a member of the Islamic State, now thought to be one of a number of British citizens who left their native land to fight for the Islamic State.

According to The Guardian, an international manhunt for the man thought to be leading a group of British jihadists holding foreign hostages in Syria is underway. Linguistics experts are working to identify Foley’s murderer, a militant known as “Jihadi John,” by his accent. The believed Londoner has been recognized as having previous involvement in rebel hostage negotiation talks.

In a statement given Wednesday from Martha’s Vineyard, Mass., President Barack Obama offered his condolences to the Foley family and condemned the killers.

“People like this ultimately fail,” Obama said. “They fail, because the future is won by those who build and not destroy and the world is shaped by people like Jim Foley, and the overwhelming majority of humanity who are appalled by those who killed him.”

Obama offered prayers for Foley and other American prisoners, including another American journalist Steven Sotloff, who is shown at the end of the video with the warning that his life depends on Obama’s future decisions.

Since the release of the video, Politico reported that the United States has orchestrated nearly two dozen airstrikes against IS holdings in northern Iraq. In his statement, Obama assured Americans that he would seek justice and remain vigilant, and has since asked Congress for $500 million to begin a Defense Department initiative to arm and train Syrian rebels.

Since Foley’s disappearance on Nov. 22, 2012 while covering Syria’s civil war, his family has fought  tirelessly for his release. After his death, his family has asked only that their son’s memory be honored and their private grief be respected.

“We have never been prouder of our son Jim,” said his mother, Diane Foley, on the Find James Foley Facebook page. “He gave his life trying to expose the world to the suffering of the Syrian people. . .  We thank Jim for all the joy he gave us. He was an extraordinary son, brother, journalist and person.”

Foley, 40, was the oldest of five children and originally from New Hampshire. He graduated from Marquette in 1996 and studied history and Spanish.

Claire Nowak contributed to this report.