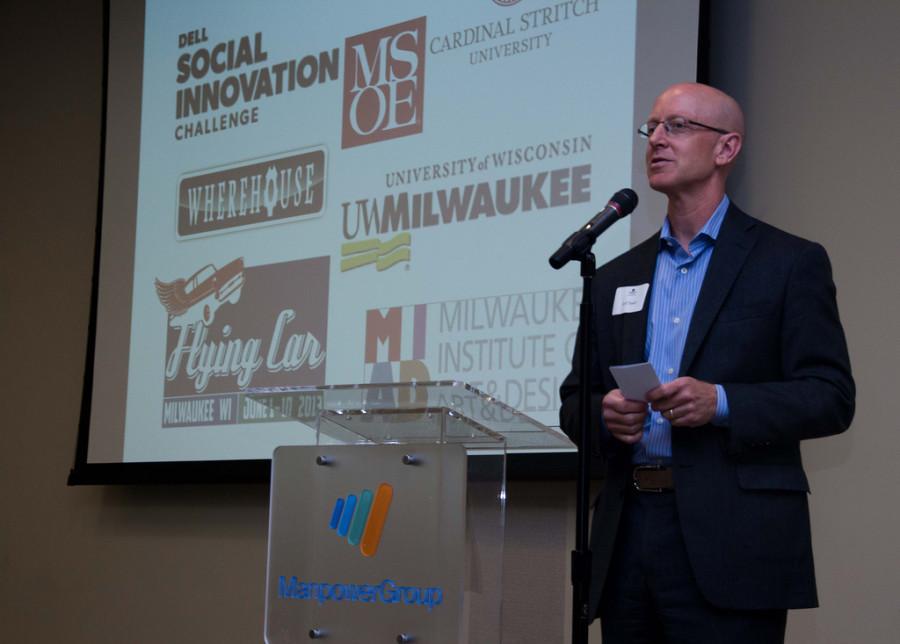 FixesU, a social innovation partnership between Marquette and The New York Times, ended in the wake of the layoff Jeff Snell, who was the primary architect of the university’s Social Innovation Initiative.

SII hosted a faculty forum Wednesday to discuss the future of social innovation at Marquette. The event was led by the initiative’s new leader Jeanne Hossenlopp, vice president for research and dean of the graduate school, and the Rev. Nicholas Santos, an assistant professor of marketing. The purpose of the event was to decide how to advance the initiative at Marquette in the wake of the layoff of Snell, whose severance reverberated throughout social innovation projects at Marquette.

“It’s really sad that Jeff Snell was let go, and it’s important that we figure out how to move forward,” Santos said at the event.

FixesU is a project working to build a wiki-style platform to bring case studies of social innovation projects around the world to classrooms across the country. It is based on the “Fixes” column published in The New York Times by David Bornstein and Tina Rosenberg. Bornstein, however, said the project grew out of the work of Snell.

Bornstein said it was Snell’s idea to create the platform using the “Fixes” column, and with the help of Bornstein and Rosenberg, he built a proposal for the project that won a grant from the Bill and Melinda Gates Foundation. FixesU, however, will no longer have a partnership with the university now that Snell is gone because Bornstein said he believes the project “would not be a priority” at the university without him.

​”We’re currently looking for another university home,” Bornstein said. “We want the project to live in a place where it will be built up over time.”

People within SII said they felt the project was hugely beneficial to the university.

Chapman recently resigned from her position with the SII, despite saying it is the career field in which she wants to work. She said there is not enough structure or tangible work being done at the initiative as a result of the changes that have taken place in the last two months.

Bornstein said FixesU is ultimately moving on from Marquette because the organization believes there is not enough support to help it grow.

Bornstein said the program could have remained affiliated with Marquette if it attained finances to support it. He also said there were opportunities for the university to obtain enough funding for the program beyond the length of the Gates Foundation Grant.

“There was considerably more funding that the university could have applied for,” Bornstein said.

Chapman could not speak to any grants that may have been available directly for the FixesU program, but said that lack of grant-seeking could be a problem.

“We applied for grants when Jeff was here, and as far as I know we haven’t applied for anything since then,” Chapman said. “The lack of active grant-seeking within those two months would definitely be something to note.”

Chapman also said the lack of support for the FixesU program is systemic for SII as a whole.

“There is no anchor or defined structure for the Social Innovation Initiative,” Chapman said. “That’s why when budget cuts came around it was easy to cut (social innovation) roles.”

Despite the end of the partnership, Bornstein said there is no ill will with the university, explaining that he and Rosenberg had a great experience and were happy to have had the opportunity to grow the program. He also indicated that he plans to maintain a strong relationship with the College of Communication through his Solutions Journalism Network, a separate endeavor that aims to spread the practice of reporting on responses to social problems.

Still, many questions remain about the future of SII at Marquette. Chapman said if Marquette wants to spread social innovation at the university, it must increase active support for the initiative, such as designating a physical location for the program, developing a communications platform and fostering ways to incubate both startup ideas.

“At this point I would say it’s all talk because we haven’t seen anything come of it,” she said.

Rob Gebelhoff contributed to this report.