After appointment of first lay president, Jesuits confident with role at MU 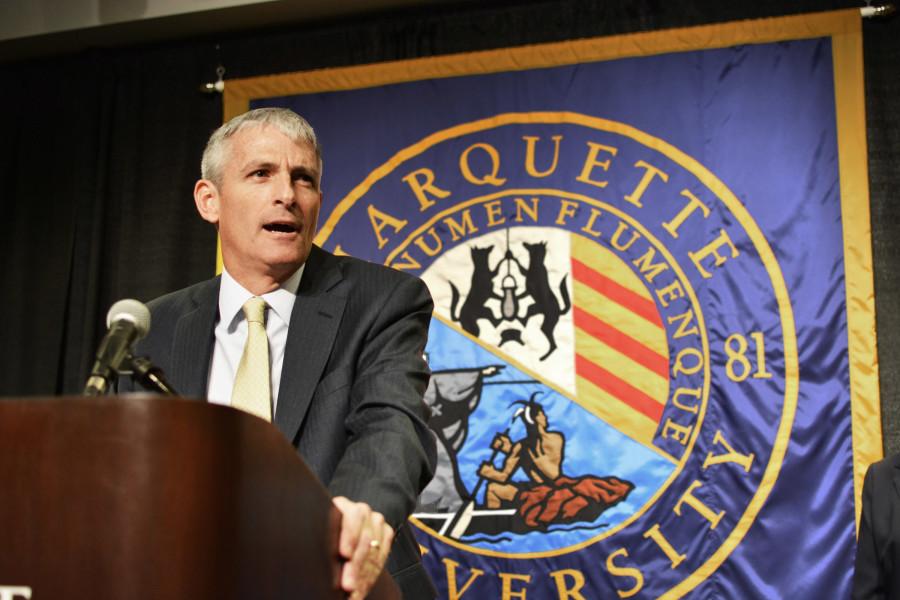 With Michael Lovell, Marquette president-elect and former University of Wisconsin-Milwaukee Chancellor, taking office Aug. 1, he will make history as the university’s 24th president and the first-ever layperson to hold the job in the school’s 133-year history.

Despite the installation of a non-Jesuit to the university’s most prominent administrative position, many of the 51 Jesuits who reside or teach at Marquette are not concerned about their future role on campus.

The Rev. Douglas Leonhardt, an associate vice president in the Office of Mission & Ministry and McCabe Hall pastoral minister, said the Jesuits will continue to play an important role at Marquette, with the construction of a new Jesuit residence a sign of the mutual commitment between the university and the Society of Jesus.

“Without a Jesuit as president, the Jesuit community is committed to having the same kind of presence as in the past — in the classrooms, residence halls, campus ministry, other areas of administration as has been evident during the past years,” Leonhardt said in an email. “Even the location of the new Jesuit community is a symbol that the Jesuits are visible at Marquette. Jesuit presence is more about the quality of presence that Jesuits bring to a university setting than about the number.”

“It was the expectation, often times expressed in the bylaws, that a Jesuit be president of a Jesuit college or university,” Leonhardt said. “This often was when there were a greater number of Jesuits available for such a positions as well as when the presidency of a university was less complex. But in recent years we have run out of the number of qualified Jesuits for university presidencies. To have an institution flourish, it is more important that there be a qualified person, man or woman, in the top leadership role.”

After hiring the Rev. Scott Pilarz as president in 2011, Marquette’s Board of Trustees amended its bylaws to allow the university to have a lay president, provided the candidate belongs to the Roman Catholic Church.

According to the Rev. Fred Zagone, an assistant to the vice president for university advancement and Humphrey Hall pastoral minister, the religious qualification is essential to the university’s Catholic character.

“As a part of the larger Catholic community it only makes sense that our leadership believe, understand and practice that same faith,” Zagone said in an email. “In reality, one can be a very good person and not be a Catholic. At Marquette, we want both. Faith and action are two different things. I believe we are fortunate in Dr. Lovell in that he appears to have both. Any successful company has a CEO who believes in the product.”

Zagone said “only a few” alumni were disappointed with the appointment of a non-Jesuit as president, but like Leonhardt, said Marquette will “have a very viable, visible Jesuit presence on campus that will remain strong.”

“I express a rather common sentiment among Jesuits in applauding the selection of Michael Lovell as the first lay president of MU,”  Zeps said in email. “The first thing he did was to come to the Jes Res for Mass and dinner the day after the announcement …That made a great impression on us, to celebrate the Eucharist with the president-elect as one of his first semi-official functions.”

Many Jesuits were also quick to emphasize that a university is more than just its president, but rather a reflection of the campus community as a whole.