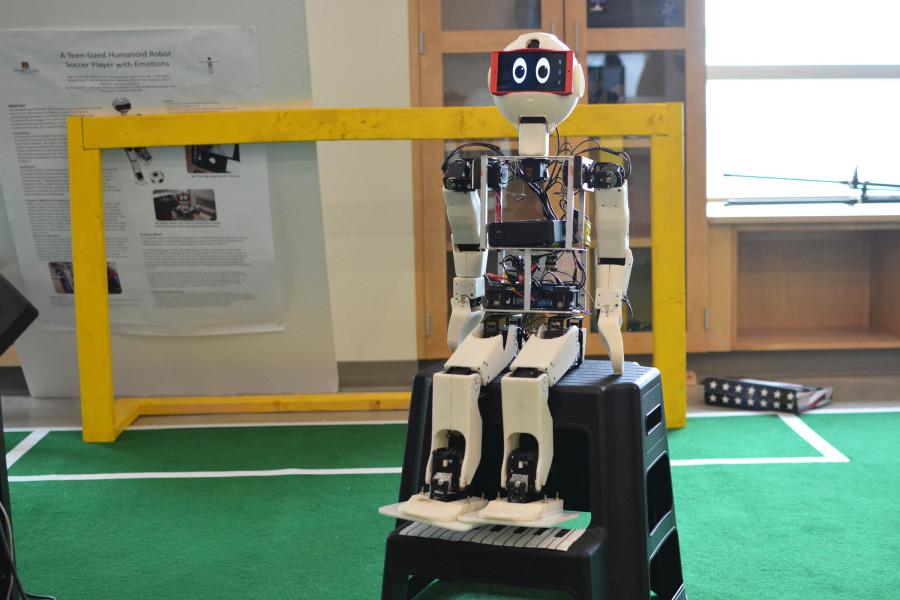 As the 2014 World Cup in Rio inches closer, a group of Marquette students hopes to compete in a different global soccer tournament held in Brazil: RoboCup 2014.

This tournament brings together universities from around the world to show off their robotic creations playing the beautiful game.

Competitors participate in separate divisions based on the size of their robots. There are three divisions: kid-size, for machines about two feet tall; teen-size, for those about three feet tall; and adult-size, for life-size androids. The robots operate without any human interaction.

Though the robots are nowhere near the level of professional soccer players, the RoboCup initiative hopes robotics will develop to the point that it will be able to field a humanoid team capable of playing the World Cup champion by 2050.

Marquette’s Humanoid Engineering and Intelligent Robotics Lab is one of three United States university programs to qualify for this year’s competition. The other two schools representing this country in the RoboCup are the University of Pennsylvania and Virginia Tech University. Each American university is competing in a different division. Marquette will compete in the teen-size division, Pennsylvania will play in the adult-size division and Virginia Tech will take on the kid-size division.

“We’re the only university in the teen-size,” said Andrew Williams, the John P. Raynor associate professor of electrical engineering and director of the HEIR Lab. “(RoboCup) will help put Marquette on the global map of engineering so universities from around the world will be able to see Marquette University. It’s quite a feat for mostly undergraduate students here at Marquette to do this.”

The HEIR Lab started making toy-sized robots that played basketball in fall 2012. However, last January the group decided to step up its game and build a robot for RoboCup. The work took more than one year and was led by Adam Stroud, a junior in the College of Engineering and a research assistant in the HEIR Lab. The end result was MU-L8.

At three feet tall, MU-L8 qualified for the teen-size league. Students from many majors and backgrounds contributed to the effort, with all of the specifications, applications and parts made by students.

RoboCup asks universities interested in applying to have certain capabilities, with one of those being the ability to emotionally react to the game. This is where Elise Russell, a graduate student in the HEIR Lab, made her mark. Using an Android phone for a face, the team created an application that allows MU-L8 to have six expressions including happy, angry, sad and surprised.

“The smile app is the emotional interface for our humanoid robot, MU-L8,” Russell said. “Any Android phone can upload the app and be inserted in the robots face and it displays eyes that blink. The robot uses six different emotions so you can have conversations with it and tell it anything and learn new things.”

Though the team took a huge step by qualifying, it still has a long way to go before a trip to Brazil can become a reality.

There are still many expenses needing to be covered. The qualifying fee is $4,000 alone, and MU-L8 also needs a teammate. Building another robot can cost up to $11,000. Though MU-L8 took more than one year to complete, the team believes it should not take more than two weeks to build a counterpart since the design and applications already exist.

Other costs yet to be covered include travel expenses and paying students to work on the project over the summer. To help cover the team’s expenses, the HEIR Lab started an indiegogo.com crowdfunding campaign.

The fundraiser went live Tuesday with the goal of raising $5,000 by April 30. As of Wednesday, the group raised $1,305 – a little more than 25 percent of its goal. The campaign only covers the qualifying fees, with the group hoping the rest will be covered by donations from companies, alumni and other sources of support.

Whether or not the HEIR Lab makes it to Brazil this summer, its goals extend beyond just playing soccer. The robot’s original application was to be a health coach for kids, which will remain its main focus in the future.

“Although the goal this summer is to play soccer, we hope to eventually make the soccer ability integrate into a health coach where the robot can play soccer interactively with kids, maybe with developmental disabilities or some kind of disabilities,” Williams said.