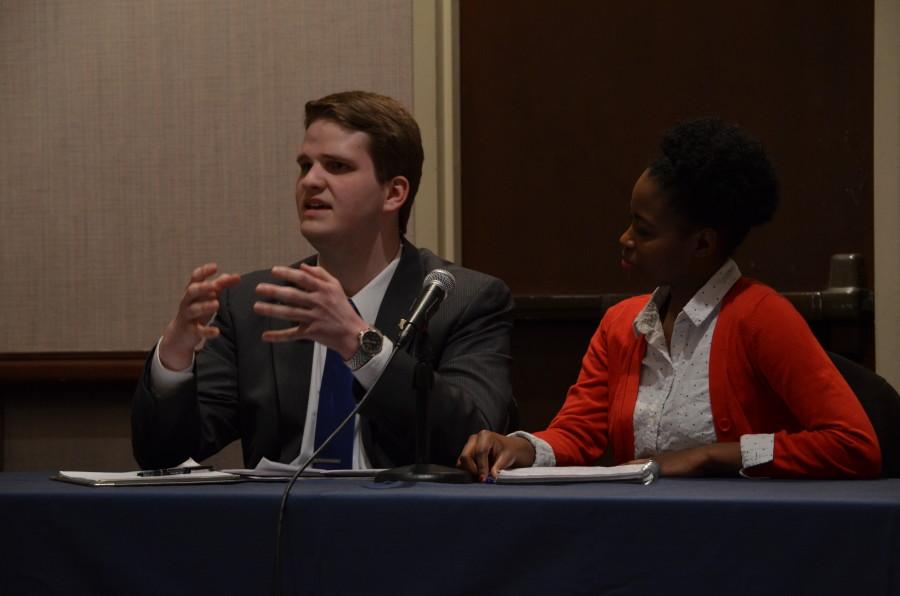 Kyle Whelton and Natalie Pinkney, both juniors in the College of Arts & Sciences, will be the next president and executive vice president for Marquette Student Government, respectively, after MUSG announced the election results Thursday.

“I’m overwhelmed,” Whelton said after the results were announced. “Natalie (Pinkney) and I worked really hard.”

Whelton and his running mate Pinkney will be inaugurated as president and EVP Tuesday in the Alumni Memorial Union ballrooms.

This was the first year MUSG used instant runoff voting in the presidential election, a process by which students rank their choices rather than voting for a single candidate. If no ticket received a majority of votes, the last place ticket is dropped and those second place votes are then added to the total of the other tickets.

An instant runoff round was then put into effect, which eliminated the Tucky-De Luca ticket and the second place votes were distributed to the remaining two. After this round, Whelton-Pinkney had 52 percent of the vote, and Bowman-Biagi had 41 percent of the vote. The percentages are not perfect because a number of students chose not to vote for a second candidate.

After the election, Whelton complimented his opponents.

“It’s been an honor to work with them, and I wouldn’t be in this position if it hadn’t been for the work we did together,” Whelton said.

Whelton said after the announcement the first thing on his agenda will be gathering student feedback on how to spend the Prior Year Reserve Fund. His new EVP will also have her hands full in the coming days. In her new role Pinkney will be responsible for chairing the Student Organizations Allocations Committee, more commonly known as the Student Organizations Funding Committee, which controls the flow of student organization funds to student groups.

“It’s definitely time to sit down with organizations and see if we can allocate them some money,” Pinkney said.

Total voter turnout for the election was 22.3 percent, a 2 percent increase from last year. Elections Coordinator Grace Kinnaman, a sophomore in the College of Nursing, said this was a reflection of the new voting system.

“I think that the new voting process was intriguing to students,” Kinnaman said. “(Turnout) wasn’t as high as we would like it to be, but maybe next year once people see that this system has worked successfully the numbers will be higher.”