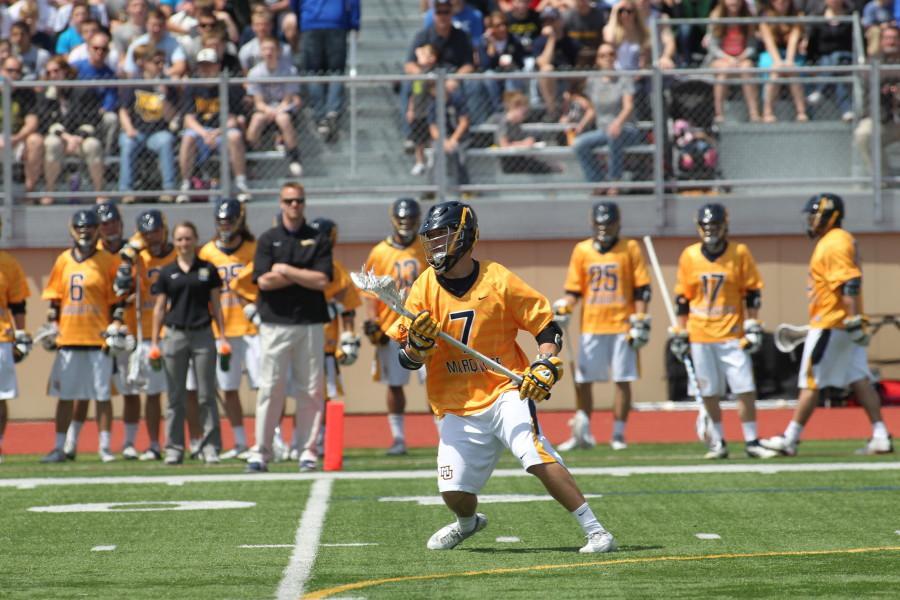 Saturday not only marked the first Big East game in program history, but also the team’s home opener. Though not at the team’s usual home location of Hart Park, 982 fans were on hand at Uihlein Park.

“Considering where it was, how cold it was and what else was going on, it shows how impactful lacrosse can be here on campus,” coach Joe Amplo said. “That it what our team plays for, for those people, not for the people who weren’t there but for the people that were there.”

Following the opening draw, the Marquette offense cruised to an early 2-0 lead. Both goals by freshman attackman Kyran Clarke and redshirt senior attackman Tyler Melnyk came on feeds from sophomore midfielder Kyle Whitlow to the crease for easy put-aways.

Marquette fans went crazy with an early lead; however, the offense was shut out for the remainder of the quarter and Villanova scored three unanswered tallies to take the lead at the end of the first.

The Golden Eagles knotted the game at three on a Whitlow goal but again went cold on offense and at the half the Wildcats held a 6-4 lead.

Out of the gate in the second half, Villanova capitalized on its opportunities, quickly taking a 9-4 lead.

Slowly, Marquette crawled out of the five-goal hole and with 2:17 remaining in the game, sophomore attackman Conor Gately scored to pull within one. Despite multiple possessions in the closing minutes, simple mistakes led to turnovers and Villanova ran out the clock.

“If we played a complete game it wouldn’t have been different,” Gately said. “We started off pretty well but then we made some silly mistakes that got them easy goals and those easy goals came to bite us in the butt. The potential is there but it’s just got to be a better outcome.”

Even in the losing effort, the defense stood tall, especially in the second half when it held Villanova scoreless for more than 25 minutes. Between the pipes, freshman goalie Jimmy Danaher made nine saves, three in the fourth quarter.

A two-man advantage early in the fourth went awry when a lazy pass was intercepted allowing the visitors to run out the penalties. This was similar to Marquette’s final possession when Melnyk’s lackadaisical underhand pass was picked off and the Wildcats ran away with the victory. Five of the team’s 14 turnovers came in the fourth quarter.

“I told the guys (with a little over a minute remaining), and I kind of look back and in hindsight I probably shouldn’t have said this but I said if we had the ball for a minute we’re going to get a great look,” coach Joe Amplo said. “After the game I asked Melnyk and he said what (I) said at the timeout stuck in his mind and he ran into a double team and made a bad pass.”

Big East play rolls on Saturday at 11 a.m. when the team hits the road to face Rutgers for the first and only time as a Big East member before the Scarlet Knights depart for the Big Ten next year.

“This is another one we have the potential to win,” redshirt sophomore defender Liam Byrnes said. “We want to win and make that Big East Tournament. If we play a complete game we should win.”