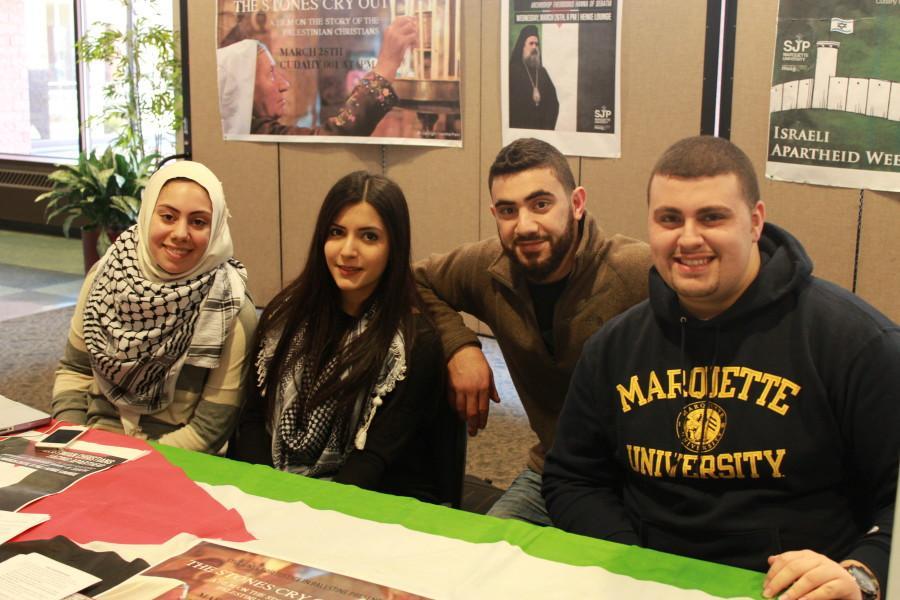 Students for Justice in Palestine will host Marquette’s first Israeli Apartheid Week this week, amid disagreements with university administrators.

The week seeks to open a discussion on the Israeli-Palestinian conflict, which started in the mid-20th century by delving into the tensions surrounding the issues of Israel’s borders: violence and security.

Events will include a mock apartheid wall and two discussions featuring Archbishop Hanna of Sebastia, a member of the Greek Orthodox Church of Jerusalem who is also from a Palestinian village in the West Bank. In addition, SJP is asking students to sign a petition to the Milwaukee Common Council, urging them to ask Congress to decrease spending on military aid to Israel.

Israeli Apartheid Week is an international movement advocating against Israel’s occupation of the Palestinian territories, which is alleged to be analogous to South Africa’s apartheid.

According to Mohammed Ayesh, the president of SJP and a senior in the College of Engineering, Israeli Apartheid Week ran into complications that prevented it from happening earlier.

“We tried to host (Israeli Apartheid Week) last week, since it’s the week used by universities across the world, but we couldn’t get space and the speakers weren’t available,” Ayesh said.

Ayesh said SJP ran into further problems when administrators asked him to take “apartheid” out of the week’s title.

“It’s difficult to get administration and campus organizations to help us because our events are ‘too controversial,’” Ayesh said. “We’ve heard from some faculty members that they don’t want to partake (in this week) because they don’t want to take sides. Well, not partaking in the event is already telling me that you choose a side.”

Supporters of Israel, such as Dylan Elhai, the president of the Jewish Student Union and a junior in the College of Communication, disagree with the use of the term ‘apartheid’ in describing Israel’s actions.

“The JSU doesn’t think it’s a matter of opinion whether or not apartheid exists in Israel,” Elhai said in an email. “It’s factually not apartheid if you look at the legal citizens’ rights and liberties.”

Roughly 20 percent of Israeli citizens are Arabs, who are legally granted the rights afforded to Jewish residents. The majority of Palestinians, however, live in the Israeli-occupied Palestinian territories of the West Bank and the Gaza Strip, and are not Israeli citizens.

Elhai said she reached out to SJP on co-sponsoring the week and asked for inclusion in the “Living Under Apartheid: Universal Struggle, One Local Solution” panel.

“It was very directly stated by SJP that they had no interest in including a Jewish voice in their programming,” Elhai said. “While it was not what JSU was expecting to hear, we understand SJP’s need to represent a Palestinian voice on campus as their own entity.”

SJP turned down the offers since its week’s events were already planned and finalized, saying the group would have considered JSU’s offer if it had contacted SJP earlier. Ayesh said he encouraged members of JSU to attend their panel.

“For one, adding another (panel) speaker would have changed (the plans),” Ayesh said. “And the panel discussion is not for showing both sides of the conflict; it’s to show what’s been happening to the Palestinians by the Israelis.”

Despite the surrounding controversy, Ayesh said he thinks it is important for Marquette students to learn about and discuss the Palestine-Israel conflict.

“This is information that Marquette students need to be aware of and they should be more involved with global issues, not just local issues,” Ayesh said. “The (Israeli-Palestinian conflict) affects all Americans because a lot of the violence in Israel was paid for with U.S. tax dollars.”

In response to Israeli Apartheid Week, JSU will host an Israel Peace Week from April 7-11. The group invited members of SJP to participate and Ayesh said he and his board members will consider their offer once this week ends.

“While we think this topic is extremely important to be aware of, we think that there are better, more informed, and more fact-based (rather than propaganda-based) ways of presenting this issue to campus than the way SJP is going about it,” Elhai said. “Israel Peace Week seeks to educate and advocate for a peaceful and open dialogue in the resolution of the Israeli-Palestinian conflict.”

The Tribune reached out to political science professors to discuss the issues surrounding Israeli apartheid, but none responded.