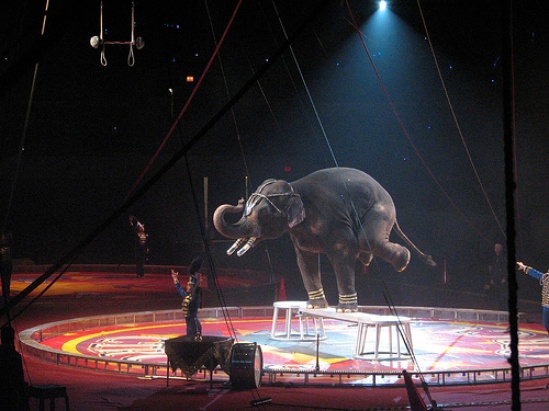 Step right up,  ladies and gentlemen; the circus is coming to town.

The Tripoli Shrine Circus makes its 51st annual visit to Milwaukee’s U.S. Cellular Arena Thursday and will perform four shows through Sunday. The show costs $18 for general admission and $9 for the opening night special, but tickets for that deal are selling fast. Opening night festivities include a Circus Pre-Party that will take place one hour before the show, where audience members can gather in excitement while eating their favorite circus foods.

The circus is sponsored by the Tripoli Shriners of Milwaukee, who are known for their community service and civic involvement. A portion of the money raised from the circus will benefit the local Tripoli Shrine Center.

“This is our biggest fundraiser of the year,” said Jim Mahaney, the circus chairman and a Tripoli clown. “The money allows our building to operate so that we can continue to raise money for children hospitals and to keep supporting the families of those children.”

The Shriners not only set the show up to raise money for children’s hospitals, but they also perform in it.

“We have a band that performs, bagpipers, motorcyclist and of course, clowns, all of which take part in the circus show and activities,” Mahaney said. “It truly is a fun and exciting time for us as well.”

The Tripoli Shrine Circus is America’s original three-ring circus, meaning triple the events and triple the excitement for spectators. From balancing elephants to daredevil motorcyclist, the circus prides itself on finding acts from all over the world. All the acts operate under the direction of Ring Mistress Michelle Audrey, one of the only ring mistresses in the circus world today. Here are some of the main highlights the Tripoli Shrine Circus has to offer.

There simply is no circus without elephants, and the Tripoli Shrine Circus has plenty. The talented creatures balance on chairs, roll on barrels and essentially take over the three rings as they perform plenty of picturesque poses and pyramids.

Among these talented elephants is Broadway Bo, billed as the largest performing elephant in the world. Bo will perform more than 60 tricks in her routine.

“Bo was bought by the Tripoli Circus when she was just a baby,” Mahaney said. “Then, it just kept growing and growing. She stands at 11 feet tall and weighs around three tons.”

Broadway Bo, along with her other skilled companions, will also make an appearance at the end of the show, so fans of all ages can pay to take rides on the elephants for a lap around the ring.

High above the rings is where The Marinof Duo twirls dangerously and gracefully above the spectators below. This co-ed duo exhibits strength and skill with no margin for error in their performance.

Giorgio and Luisa used to perform for the Bucharest State Circus in Romania before joining the Tripoli Shrine Circus in 2009. Since they joined, the pair caused numerous gasps from the crowd as they dangled from dangerous heights, sometimes only by their fingers and toes. One of their most daring stunts includes one holding the grip of a rope using only his teeth, while the other dangles mid-air from the same rope.

Luckily, there is a net underneath the acrobats. It is a family show, after all.

“I suggest covering your ears for this performance,” Mahaney said. “When David gets shot across the arena, it truly is a sight to see.”

Smith has performed more than five thousand cannon shots around the world and holds the world record for longest distance for a human cannonball.

Rage in the Cage

To ensure elephants aren’t the only exotic animals to take the stage, the Tripoli Shrine Circus will also feature majestic lions and tigers in its Rage in the Cage performance.

Bruno Blaszak, a brave feline trainer from Poland, performs with the tigers and lions in a caged area in the center of the main ring. Hailing from a family of professional animal trainers, he trains and works with Siberian, Bengal and Sumatran tigers in Poland before bringing them along on the Tripoli Shrine Circus adventure.

The performance includes impressive feats, like tigers leaps, dancing and walking on a tight rope. Blaszak will also discuss his desire to preserve the tiger population and suggest ways audience members can help. It is a wild performance with an even wilder man spreading information about a good cause.

While those are just a few of the main events, there are still plenty of others such as the aerialists, caged motocross stunts and of course, the beloved (and sometimes feared) clowns. There will also be a special guest performance, but it will remain a secret until the show’s opening night.