Sing us a song 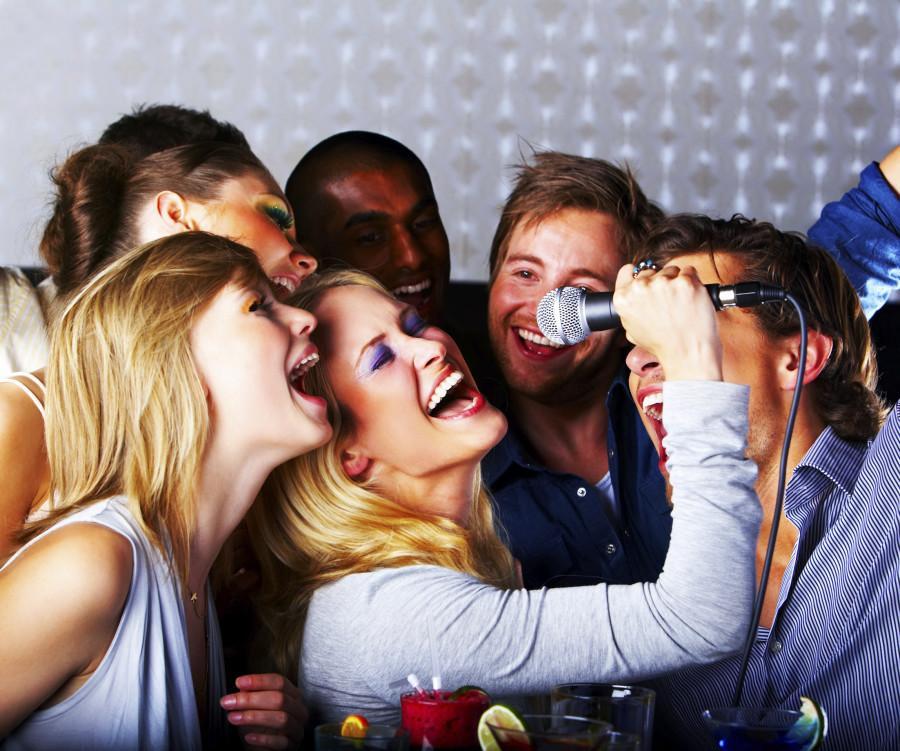 A group of young people singing at a karaoke party.

Whether you are 5 or 95, karaoke is one of the all-time greatest forms of entertainment. We’ve all been there, watching with second-hand embarrassment as people completely humiliate themselves in a sad attempt to sing a classic or feel they are Celine Dion on stage – everyone has that one, memorable karaoke experience. With Marquette located in the heart of a city filled with bars and restaurants, there are plenty of karaoke venues around town. We have gathered some of the best (and worst) first-hand accounts in order to provide you with the ultimate karaoke 101.

Most Embarrassing Karaoke Story: “One time I went to Duke’s for their happy hour, which includes $1 drinks and karaoke on Thursdays. If anyone has experienced this happy hour, I hope you understand the state of mind I was in around 11 p.m. Countless bar patrons were getting up on stage and belting out classic karaoke songs like ‘Sweet Caroline’ and ‘Ice, Ice, Baby’ and the crowd was loving it. After finishing my beer and watching these less than average performers receive love from the crowd, I decided it was my time to shine. I stumbled up there and asked to sing ‘Proud to be an American’ as I was positive the crowd would go nuts and sing along regardless of my complete inability to hit a note. But wow was I wrong, the exact opposite happened. I stood up on that stage in front of the entire bar, singing my heart out and everyone just stared at me with no sing-a-longs or cheers. Then, to make matters worse, my friends whipped out their phones to record me for blackmail.  In a sad attempt to salvage my performance, I gave a patriotic salute at the end of the song, but once again, blank stares like I was in Canada or something. Needless to say, my best advice is just don’t karaoke.”

Best Karaoke Song: “‘Say It Ain’t So’ by Weezer or ‘Jumper’ by Third Eye Blind. Both are great sing-a-longs and considered karaoke classics. Not to mention they’re interactive with the crowd, which makes them more fun to do.”

Best Karaoke Memory: “I sang karaoke in front of my whole senior class the night we graduated from high school to ‘Jumper’ and I nailed the ‘Yeah, yeah, yeah’ scream at the end. Definitely one of the top five moments of my life.”

Best Karaoke Advice: “Karaoke is all about engrossing yourself into a bad boy persona, and making people drawn to your bad boy music.”

Best Place to Karaoke: “The very best place to karaoke is Señor Frog’s in the Treasure Island Hotel on the Las Vegas Strip, which is where I was when I belted out my rendition of ‘I Want You Back’ by the Jackson 5. After watching a couple of people’s attempts on stage, some talented and some not so much, I decided that it was my turn. With a little liquid courage, thanks to a margarita-filled yardstick and a half (do not ever attempt to drink more than one. Seriously, it won’t end well), I got on stage and grabbed the microphone. The next three minutes consisted of me dancing around the stage wearing a balloon hat and yelling stupid things between versus like, ‘Let me hear you Las Vegas!’ and ‘Everybody clap with me!’ in front of approximately 60 complete strangers. After my one-of-a-kind performance, we high-tailed it out of there. We woke up the next morning with limited memories, a pretty bad-quality video of me singing and a really terrible tequila-fueled hangover. Although I couldn’t tell you much about the night, I will never forget my five minutes of karaoke fame in Las Vegas.”

Best Advice: “Picture yourself in your underwear because it’s way more fun that way.”

Best Place and Song to Karaoke: “Obviously the New Yorker to ‘Dance, Dance’ by Fall Out Boy.”

Most Embarrassing Karaoke Moment: “When you are a karaoke pro like myself, you don’t get embarrassed.”

Best Advice: “Charlie Gondeck and I always practice our karaoke version of ‘Dance, Dance’ by Fall Out Boy, just so we nail it and win over the crowd when the time comes to perform.”

What Not to Do: “A couple of years ago my friends and I walked into the New Yorker around 6 p.m. on a Friday. My friend Paul was visiting and he really wanted to sing karaoke, so we took him to the New Yorker. They must open right at 6 p.m. because when we walked in, the only people in there were the bouncer (who is also the DJ), the bartender, and a couple on the opposite side of the bar. Luckily for us, no one was singing karaoke yet.We asked if anyone had any requests before we started. When our friends started yelling out songs, we began to sing the song we had picked out prior to even walking into the building. We decided to sing ‘Paradise by the Dashboard Light’ by Meat Loaf. I would say the first couple of minutes went really well, but then we lost some steam because the song is a 8 1/2 minutes with four different parts. I would say we nailed part one, struggled with part two, pretty sure we skipped part three and I would describe part four as pure electricity. Most of the people in the bar were ignoring us, but I could tell that the few people who were still listening were really impressed that we stuck with it for the entire 8 1/2 minutes. After we finished the song, we victoriously started spinning the mics around our heads like lassos and Paul dropped his on the ground. From our victory dance, our entire group got kicked out of the bar, but that is only a small price to pay when you put on a performance like that.”

Most Unlikely Karaoke Story: “Over Christmas break I went out with my High School friends and we were looking to go to a bar close to home. We decided to check out this very shady bar just a block from our high school called Rockin Gator’s.  Once we walked in, we realized that we were the only people under the age of 45 and we were the only people not wearing jeans and cowboy boots.  It was painfully obvious that we did not belong, so my friend Jill and I decided to make ourselves look busy by flipping through the book of karaoke songs. We stopped at one of our favorites, ‘Summer Nights’ by Rascal Flatts, and knew it needed to be done.  As we anxiously waited our turn, we chugged as many beers as possible to prepare for what we had just gotten ourselves into.  Once the DJ, in his strong southern accent, pronounced our names (mine wrong, of course), Jill and I walked up waving to our three friends, and only supporters, as they hesitantly clapped in embarrassment.  The song, to say the LEAST, was a hit!  Everyone was thrilled we chose a country song and most people were on their feet clapping and singing along.  Afterwards, the people who had initially despised us for trespassing on their turf, came up to us to congratulate us.  Oh, and I also ended up with a phone number of a 65-year old woman named Paula.”

Best Advice: “Don’t choose songs with really long guitar solos unless you are really really good at the air guitar.”

So no matter if you are a karaoke expert or you are looking to break into the popular phenomena, we hope you take these accounts and pieces of advice with a grain of salt. Karaoke is always a unique and entertaining experience that will surely leave you with a one-of-a-kind and unforgettable story.

– “If your name is Caroline, don’t karaoke to Sweet Caroline because then you just look like an idiot.”