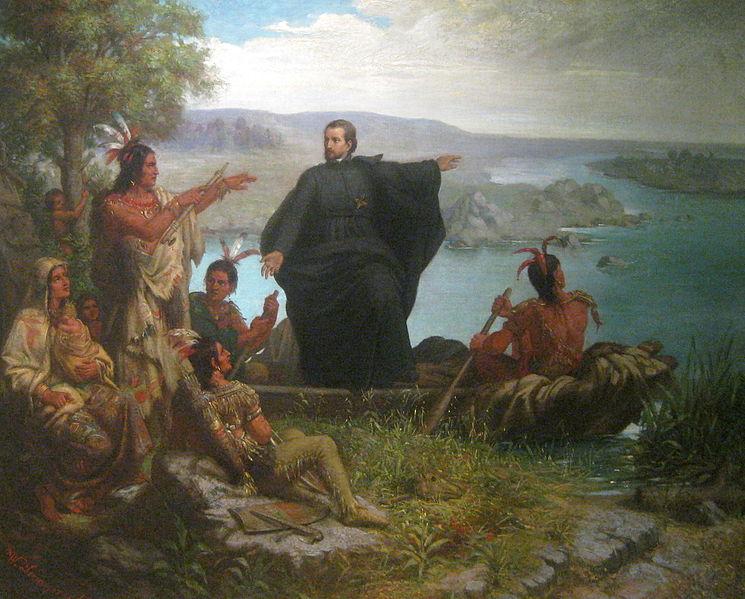 Marquette’s official seal is everywhere on campus. It is painted on ceilings, built into floors and hangs off street lamps. You can see it on every diploma and get it engraved on a $700 class ring. Yet most people who see the image everyday never realize the history, symbolism and, yes, even controversy the seal represents.

The original design was adapted from a university button in 1907 by the Rev. Francis J. Kemphues, according to Marquette’s website. And though slight alterations have been made over

the years, the design remains largely the same.

The border includes the university’s name and founding year, 1881. The blue and gold edge is Marquette’s school colors, which are derived from the French field flag used during in the 160

0’s in honor of the university’s namesake the Rev. Jacques Marquette, a 17th-century French Jesuit missionary and explorer.

The less contentious of the two inner sections, the top half, is a nod to the university’s Jesuit roots with symbols taken from the family crest of St. Ignatius Loyola, the founder of the Society of Jesus. The university’s motto, Numen Flumenque, meaning God and the River, circle the crest.

While St. Ignatius’ crest is a common feature on Jesuit university logos, the bottom half of the seal is unique to Marquette – but also more contentious. Here, Father Marquette and a Native American guide are pictured in a 1673 exploration of the Mississippi River.

The image is taken from an 1869 Wilhelm Lamprecht painting, “Father Marquette and the Indians,” gifted to the university soon after its founding. The Lamprecht painting can be seen on the second floor of the Raynor Memorial Libraries.

According to a paper by university archivist Mark Thiel, scholars  identified the native voyagers in the original painting as Metis, or men of mixed French and Native American ancestry who helped guide Marquette in present-day Wisconsin along with villages of Mascoutin or Illinois and Miami Native Americans.

The seal comes under criticism, however, as some members of the Marquette community argue the full painting differs significantly from the cropped version on the seal, resulting in an image that communicates dominance for Father Marquette over the Native American figure.

“The painting depicts Father Marquette essentially asking directions from a standing Native American,” Tol Foster, a professor in the English department who specializes in American Indian studies, said in an email. “The standing Native American is cut out of the seal, such that instead of asking for directions, Pere Marquette seems to be telling the Indian steering his canoe where to go, which is amusing if you consider that the person least likely to know directions in this strange new land would have been the explorer himself.”

Foster uses the seal in his classes to explore Native American representation. Similarly, Jodi Melamed, an associate professor of English and Africana Studies, incorporates the image into Marquette courses she teaches to focus on race and ethnic studies.

“Where Father Marquette is active and commanding, the Native figure appears passive and subservient,” Melamed said. “It’s the classic colonialist and white supremacist division of humanity being represented: the white Jesuit provides the direction, he’s the brains of the outfit, the Native person provides the labor and follows the white person’s lead.”

Others perceive the university’s depiction of Native Americans differently. Jacqueline Schram, faculty advisor of Marquette’s Native American Student Association, sees the image as an inspiration of reflection and hope that Marquette can work to improve its focus on Native American issues and students.

“For me, the Native American in our seal serves as both a source of pride and compass,” Schram said in an email. “The decision to indelibly etch the historic relationship between the First Peoples of Wisconsin and Father Marquette pays homage to the interdependency and inspires a sense of hope that this can be once again.”