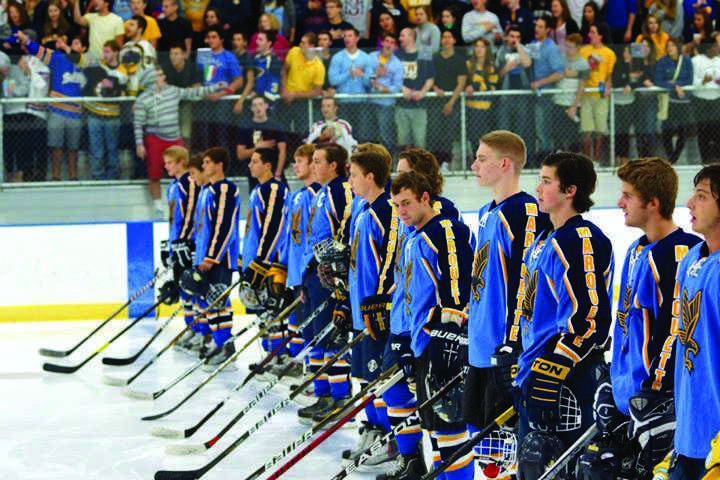 Scott Anderegg, assistant director of recreational sports, said the decision to stop the buses came from the bus company, Lamers Bus Lines Inc., since the club cannot control behavior on the buses.

“The club won’t offer a fan bus this semester due to the club not being able to properly supervise the students on the bus, which was evident by the incidents this fall,” Anderegg said in an email.

The incident occurred after a game against Iowa, Oct. 25, when a bus driver suspected the use of illegal substances on one of the three buses operating that night. All three buses pulled into the Brookfield Mall parking lot and the bus driver contacted the Milwaukee Police.

MPD searched all three buses and found an illegal substance and smoking device on one of the buses. Students were questioned, resulting in one student being issued a ticket at the scene, but more students were charged with violations later. These students then proceeded through the student conduct procedures at Marquette.

Average attendance for club hockey games is typically between 300 and 400 and some games drew a crowd as large as 550, said Cassandra Kidd, general manager of the club hockey team. According to attendance figures from GoMarquette.com, this is higher than most varsity spectator sports.

Since the termination of the buses, attendance suffered noticeably. Kidd said she saw a decline in attendance and many fans are expressing outrage to the team’s Twitter account in response to the decision to cut the buses.

“It already has (affected us),” Kidd said. “The students want to be there. They love being there and I know that a lot of students were very upset. I control our Twitter, and I got a lot of upset tweets that we weren’t sending buses to the games anymore.”

The cost of buses were paid for by funding from Marquette Student Government, and the club hockey team was the most funded of any student organization on campus.

Zach Bowman, MUSG vice president, said the funds for the buses will go unreimbursed, and the team will not be subjected to any punishment for the incident.

“Buses are what (the club hockey team) have been funded for in the past,” Bowman said. “Those funds will go unreimbursed, but I don’t see this affecting their applications in the future. It’s something they’ll have to deal with as a team, but we aren’t going to punish them for it.”

Ryan Zanon, the club hockey team president and captain, said the team is trying to bring the buses back, and the team hopes that with support from the student body the buses will return. The team has four regular season home games left, with the final game on Feb. 9.

“It’s a social gathering that students really enjoyed,” Zanon said. “Whether it was for the game or whether it was to be with each other, but it was a positive thing. But now from 7-10 on a Friday night, they have nothing to do.”