The life and times of the Marquette Turkey 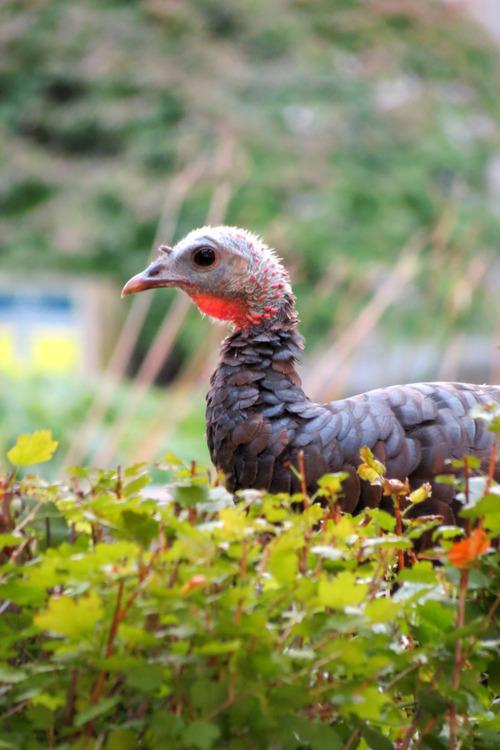 I’ve only seen the Marquette Turkey once. It was outside Cudahy Hall with a semicircle of people clustered around it with phones at the ready, snapping away to tweet, Instagram or Snapchat this oddly majestic creature that has taken up residence on campus.

Similar treatment has been given to other wild animals that made Marquette their temporary home. A couple of years ago there was a fox and last year a deer made its way into the city and found the relative oasis of campus. But none seem to have received the attention of the Marquette Turkey, which has become known through appearances around the library this semester.

There is a Twitter account, @MU_Turkey, with more than 250 followers and it seems everyone around campus has a story about a run-in with the bird.

But despite our collective excitement at this new guest, wild turkeys in the city are increasingly common as Milwaukee’s urban sprawl has grown and taken over animals’ natural habitat.

“In the past few years there has been a big increase in calls about wild turkeys. They are becoming more and more adapted to the urban environment,” Crystal Sharlow-Schaefer, a wildlife clinic administrator at the Wisconsin Humane Society, said.

The turkeys are especially prevalent around Lake Park, according to Sharlow-Schaefer. Like other animals that adapt to the city, such as raccoons and possums, the wild turkey is not picky about what it forages for food.

“They eat a lot of things in the wild and scratch around for nuts and insects. In Milwaukee, berries, oak trees and bird feeders are a big source of food and around a college campus like Marquette probably a lot of food waste” Sharlow-Schaefer said.

Though the turkey is known to frighten the most suburban of Marquette kids, the calls the Wisconsin Humane Society receives mostly are worried about the turkey’s well being as they are seldom aggressive with people.

“Occasionally they see their reflections in the windows of a building or a nice clean car and a male turkey especially will stay in front of the building, not realizing it’s their own reflection and do a lot of posturing,” Sharlow-Schaefer said.

But the Marquette Turkey is female, a hen, and lacks the plumage we think of when we think of turkeys which is more often a male, called a gobbles or tom. Females are also less aggressive than their more colorful counterparts, but students at Marquette are worried about the turkey’s well being.

“When I’ve seen it, it has a gimp leg and I don’t know specifically how it happened but it kind of limps everywhere and his leg is kind of crooked and I don’t know if it’s broke or just healed wrong,” said Kerri Byers, a senior in the College of Engineering.

The Marquette Turkey’s situation also represents the way animal habitats have been overrun by human expansion.

“It’s kind of a microcosm of what is happening with the ecosystem of animals and the urbanization of the land that is really theirs to begin with,” Kevin Mueller, a senior in the College of Arts & Sciences, said. “That said I’m really pulling for the turkey to survive and thrive.”

Some students, though, know turkeys make good eats and joke about what a fine Thanksgiving meal the Marquette Turkey would make. That was certainly my first thought.

But hunting the Marquette Turkey, besides being a real jerk move, is actually illegal now. Wisconsin turkey hunting season ended Nov. 21 and hunting with weapons in illegal in the city, meaning, provided the turkey hasn’t disappeared in the last couple days, she can live without fear of ending up on a student’s Thanksgiving dinner table.

Still some think the Marquette Turkey’s safety may not be secure.

“But you know there is a blackmarket for turkeys especially this time of year so I won’t be shocked if we don’t see the Marquette Turkey post Thanksgiving break,” Mueller warned.

Mueller’s hope for the turkey is that it will retreat to the woods and escape the perils of the city.

“I think we should stop and be thankful this upcoming Thursday for turkeys in general, but also, you know, for our little mascot that is limping around campus” Mueller said.

The Marquette Turkey always seems docile and content, but as Mueller and Byers noted it’s hard not to feel a little sorry for the turkey’s shrinking natural environment and reliance on waste to survive.

The situation improved for wild turkeys in general, though since the animals were exterminated in the 1800’s in Wisconsin and was seen as a pest. The animal was reintroduced in the 1970s and now thrives in the state coming into cities, suburbs and college campuses.

So as you sit at the dinner table this Thursday, take a moment to think about how you’re grateful for the Marquette Turkey’s comeback before digging into her distant, and delicious, cousin.