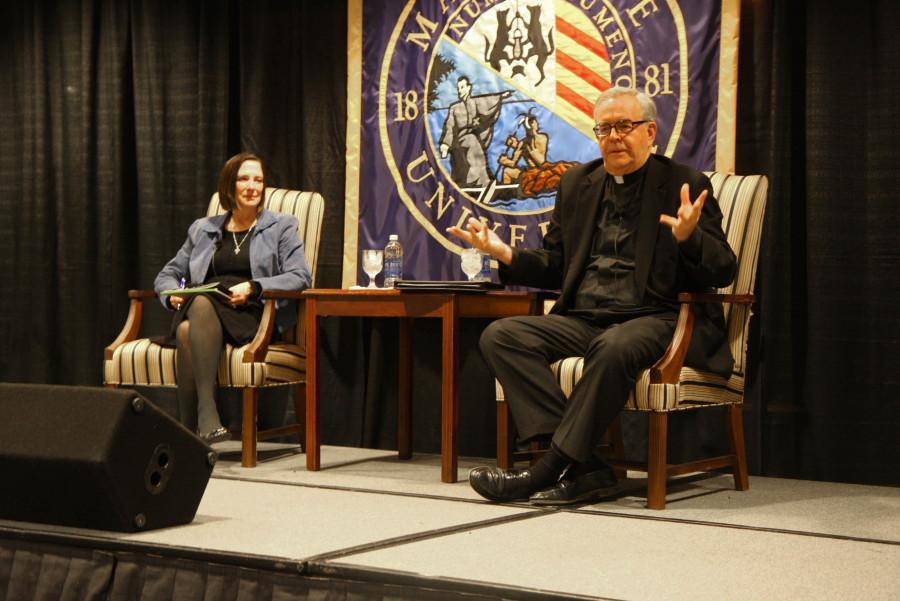 Diversity, food deserts and alcohol on campus were among the topics discussed at the Marquette Student Government-hosted forum with interim University President the Rev. Robert A. Wild Wednesday night.

Wild said these forums allow administration to learn about concerns the students have that it may not have previously heard.

“I think we have always learned something from the university that we did not know before,” Wild said. “Administrators are not omniscient, and we don’t know everything that is going on. And I think that in some cases we are able to fix some things on the spot.”

During the Wednesday night session, more than 40 students brought up a wide array of concerns, including environmental sustainability, signing up for classes, academic review and the strategic plan.

Some of the main points Wild and interim Provost Margaret Callahan addressed were diversity, the alcohol policy and grocery stores.

One of the main concerns brought up numerous times throughout the event was diversity.

Tyler Crawford, a sophomore in the College of Arts & Sciences, asked what the administration’s definition of diversity was and if it saw diversity reflected in admissions and in the graduating class.

“True diversity is when everyone, no matter of differences in ethnic, religious or sexual background, is able to feel like the university is there university,” Wild said. “We are not their yet; it is still a work in progress. We suffer from the human condition as much as anyone else.”

Though Callahan said the ratio of diverse students still is not perfect, the university is improving.

“Nationally, students from diverse backgrounds are graduating at a lower rate, but at Marquette, across all of our sectors, we beat our retention rate and our success rate of the industry,” Callahan said. “We should be proud of our accomplishment, but there is always room to improve.”

Last year, the freshman class had one of the most diverse populations at 23 percent, and maintained this rate throughout the year, Callahan said. This year, however, it dropped slightly.

“We are going into the next cycle of applications, and diversity is definitely a priority,” she said.

Kristen Steinfeld, a senior in the College of Business Administration, asked if the university had any plans to fill the vacant spot that previously housed Campus Dollar with a grocery store.

Wild said the university has been working to get a grocery store for many years. However, location and population are huge factors standing in its way.

“During Christmas time and during the summer months we do not have enough students on campus to utilize the store and provide it with enough profit to survive,” Wild said.

Arthur Scheuber, the vice president of the Office of Administration, repeated Wild’s statements. He said the university was approached by numerous businesses and are talking to many of them, but it takes time.

“When we look at a business we make sure the business has a sustainable business plan so that they are able to survive with only nine months out of the year and be able to weather a somewhat isolated Christmas time and summer,” Scheuber said.

The university was successful in bringing both Qdoba and Broken Yolk to campus, but Wild does not see a grocery store in the near future.

In August 2012, Marquette updated its alcohol policy by instituting fines. The goal of the change was to supports students’ physical, emotional and spiritual well-being. Some, though, like Kevin Cooney, a senior in the College of Business Administration, question whether or not this change is effective.

Wild said he thinks society expects the university to make it harder for students to drink.

“When there are difficulties, excessive alcohol is right there as one of the causes,” he said. “I think there is always going to be something. We don’t ask you to love it, but that there are limits and we need to enforce those limits. We don’t want to do it in a hostile way or an excessive way, but we do want to enforce them because it can cause real difficulties in the residence halls and communities.”