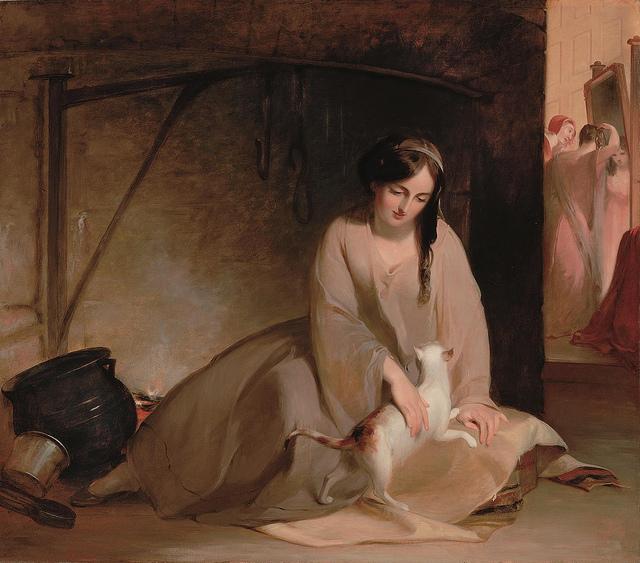 “Cinderella at the Kitchen Fire” by Thomas Sully, photo via mam.org

“Thomas Sully: Painted Performance” at the Milwaukee Art Museum is the first examination and retrospective of the painter in 30 years.

The collection will delve deeper into Sully’s career. With almost 80 paintings from collections across the U.S. and Great Britain, the museum hopes to celebrate the romantic and imaginative nature of Sully’s art in the exhibit, which will run from Friday until Jan. 5, 2014.

Sully was one of 19th-century America’s most prolific and gifted artists.

Born in 1783, Sully was raised in a theatrical family.  His parents, Mathew and Sarah Chester Sully, were actors and Thomas Sully and his siblings would sometimes perform alongside them. It was this theatrical environment that lead Sully to employ theatre, literature  and fantasy throughout his artwork.

“Sully primarily worked in portraiture, which is a very human type of art,” said William Rudolph, the curator of the exhibition in an email. “It’s all about people and how they want to be seen, which is still important to us today, even if the types of portraits we make use different media.”

Thomas Sully was known for his ability to bring his subjects to life through paint. Sully painted historical figures such as Revolutionary War hero Marquis de Lafayette, President Andrew Jackson and the young Queen Victoria.

Sully also painted portraits of popular characters in literature and theatre, as in one of Sully’s most famous portraits, “Cinderella at the Kitchen Fire.”

During Sully’s long career of 70 years, he painted more than 2,300 paintings. Paintings, which according to Rudolph, have been neglected by the modern critics and public.

“Although Thomas Sully was incredibly popular in his day and is a major nineteenth-century American artist, he has had very little critical attention in modern times,” Rudolph said. “This made it seem he should have been the subject of a new look.”

Sully’s work will be presented thematically in four stages.

The first stage is the “theatrical portraits,” depicting actors in performance followed by the “traditional portraits” shaped by the artist’s theatrical and literary past.

Stage three features the “fancy portraits,” portraits derived more from an artist’s mood or imagination than a real likeness. Next, the “fancy pictures,” narrative art, based off both literary and artistic sources that often include social commentary, will conclude the show.

“Sully had a great way of putting paint on canvas.  He had a splashy technique and a very delicate way with color,” Rudolph wrote. “He also gave his subjects an energy and sense of movement that was different from many of his peers.”