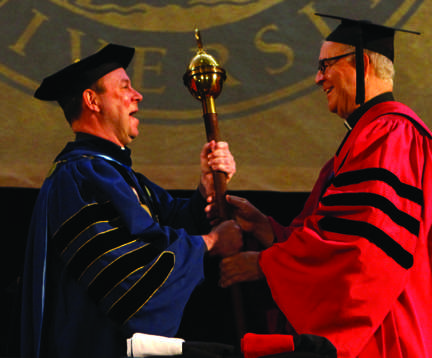 The Rev. Robert A. Wild will serve as interim president while the university searches for a successor to University President the Rev. Scott Pilarz, the latter announced in an email Wednesday. Wild will assume the role Oct. 16.

Wild previously served as university president from 1996-2011, and continued to live in the Jesuit Residence on campus since his retirement. After retiring as university president, he became the special assistant for advancement for the Chicago-Detroit and Wisconsin Jesuit provinces, a job he will continue to hold until returning to the Office of the President in October.

“I left Marquette for two years, but my heart has always been here,” Wild said in the news release announcing the move. “As Jesuits, we are called to serve where we are needed, and I’m hopeful my past experience will help move the university forward in this time of transition.”

Wild succeeded the Rev. Albert Diulio as university president six months after the latter resigned in December 1995. While in office, Wild saw admissions applications increase from 5,000 to 20,000, and oversaw the construction of the Raynor Library, Eckstein Hall, the Al McGuire Center and Engineering Hall.

“As Father Wild has 15 previous years of success and experience as president at Marquette, the Board has great confidence in his ability to continue the current momentum on campus,” said Brian Dorrington, senior director of University Communication in an email. “He has a strong track record of connecting with both alumni and students.”

Former Provost John Pauly commended Wild for returning to the Office of the President.

“It is very generous of Father Wild to step back into his role on such short notice,” Pauly said in an email. “Lots of us at Marquette are grateful for that.”

Toward the end of his tenure, Wild came under fire for allegedly concealing information in a sex abuse scandal while he was provincial superior of the Chicago Province of the Society of Jesus. A year earlier, he dealt with the fallout from the university’s rescinded offer to make Jodi O’Brien, a Seattle University sociology professor, the new dean of the College of Arts & Sciences.

However, the university issued a press release Wednesday focusing on Wild’s accomplishments including his push for “faculty and staff to consider what makes a Jesuit education unique and led the development of a university mission statement based on excellence, faith, leadership and service.”

Pilarz said in the press release that he is confident in Wild’s leadership.

“I know that Marquette is in great hands, and I will happily work with Father Wild and the Board of Trustees to ensure a smooth transition and a successful search over the next few weeks,” Pilarz said. “I have enjoyed my time here, especially my interaction with students, faculty and staff.”

In the email to students announcing Wild’s appointment, Pilarz also gave reasons for resigning from his office mid-semester. The outgoing president cited caring for the health of his ailing father and his personal desire to do more pastoral work, teaching, research and writing. Pilarz said in his email that he did not think these factors could exist while being president.

“I believe that Marquette needs a president who is willing to commit to working wholeheartedly on a comprehensive capital campaign over a five to seven year period,” Pilarz said. “Given my other hopes and desires, I am not in a position to do that now. Also, I want to be more available to my aging parents’ health concerns than I can be in my current role.”

Margaret Callahan, interim provost and dean of the College of Nursing, told students in Pilarz’s class, Playing God: Divinity and Plays, in an email that Tom Kiely, director of the Institute for Catholic Leadership, will continue to teach the class moving forward, while Pilarz may join the class via phone on occasion.

The Board of Trustees also announced Wednesday that John Ferraro, a 1977 graduate of the College of Business Administration, will chair the presidential search committee which will be announced soon. Ferraro is the global chief operating officer for Ernst & Young, a multinational professional services firm.

Mary Ellen Stanek, a 1978 graduate of the College of Arts & Sciences, led the last presidential search committee in 2010, when the Board of Trustees unanimously decided on Pilarz.

The committee that chose Pilarz had seven members, and the university hosted four forums for students, parents, alumni, faculty, administrators and staff to voice opinions on qualities they would want to see in a new president.

The new permanent president is expected to be announced by August 2014, which is when Wild’s interim term ends. Wild originally announced his retirement from the university presidency at a “State of the University” forum in March 2010.