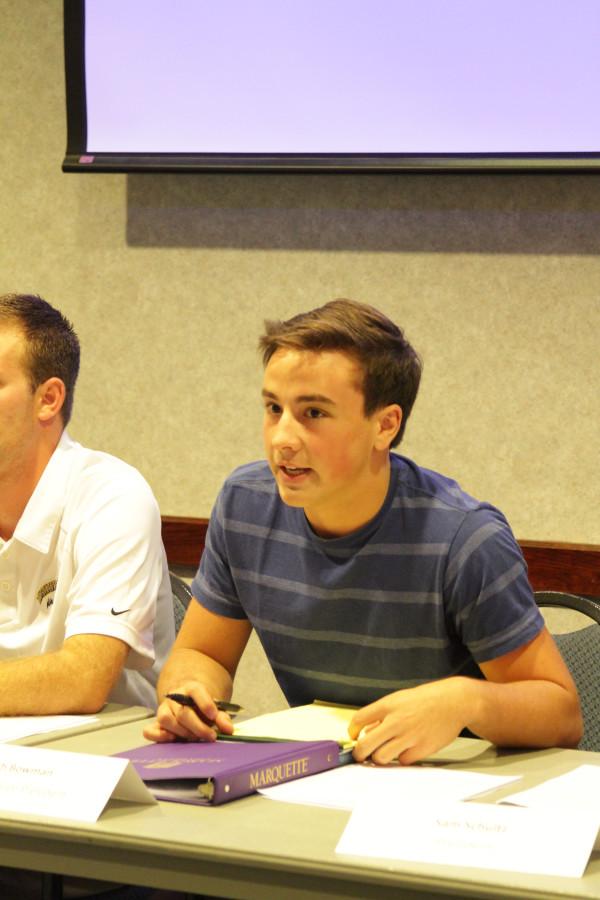 The Marquette Student Government Student Organization Funding Committee held its first meeting of the semester Saturday and approved all 18 reimbursement requests it received. The approval of funds comes a semester after efforts were made to amend the SOF process, which remains a source of contention between MUSG and student organizations.

“I think it’s the only legitimate way to distribute the funds that MUSG has available to student organizations,” said Zach Bowman, executive vice president and a junior in the College of Arts & Sciences.

Student organizations seeking help with funding an event can file a reimbursement request with the MUSG SOF Committee. The committee’s seven members are comprised of four senators, Program Board Assistant Emily Wulfkuhle, a junior in the College of Education; Financial Vice President Cole Johnson, a junior in the College of Business Administration; and EVP Bowman. The committee reviews each request and decides which ones merit funding. Johnson said they favor requests for events on campus, since MUSG surveys have continually shown that students want SOF funds to be allocated for events that will benefit the whole campus community.

MUSG annually allocates 30 percent of the funds it receives from the $30 student activity fee for SOF, for a total of $132,550 this year. The 30 percent minimum is required by the MUSG constitution, and often faces criticism because not all of the funds allocated by the SOF committee get reimbursed. Any unreimbursed funds are put into the MUSG reserve fund, which accrued $93,476 during the past three years.

“Maybe the 30 percent is actually a hindrance to our ability to provide those funds to students,” Johnson said.

An amendment proposed by Bowman last year would have removed the 30 percent mandatory minimum from the constitution and allowed MUSG to budget SOF at a lower level. While the amendment was voted down amid concerns that it would take funding away from students, Johnson argued that the freed funds would be used to benefit students in other areas.

Steve Lehocky, a senior in the College of Arts & Sciences who dealt with SOF in his former role as the treasurer of the The Naturals, a student a capella group, believes that removing the minimum is not necessary, and that other changes could be made to SOF.

“I feel like the event requirements for funding approval are entirely too strict,” Lehocky said. “I’ve found that the difference between getting funded for an event and then getting turned down for the exact same event the next year boils down to wording.”

Members of MUSG disagree, saying that the problem is in finding the right groups for funding.

“We face a challenge in finding a significant number of organizations who plan to host events on campus,” Johnson said.

MUSG plans to continue outreach to the student community on how to get funding.  They will host an event Sunday at the Student Organization Leadership Institute, to which all student organizations will send up to three members. Lehocky said he’s been pleased with the efforts that MUSG has made to simplify the application.

“The process itself is not a broken process,” Johnson said. “It’s just not an easy thing to do.”

Correction: In the Sept. 12 print issue of the Tribune, the total funds received for SOF this year is stated as $36,719.81. The actual total is $132, 550. It also says in the print issue that “the SOF Committee usually does not allocate all the money that it sets aside.” The SOF Committee actually does allocate this money, but not all the funds get reimbursed. The Tribune regrets these errors.