DPS Chief steps down after 21 years of service 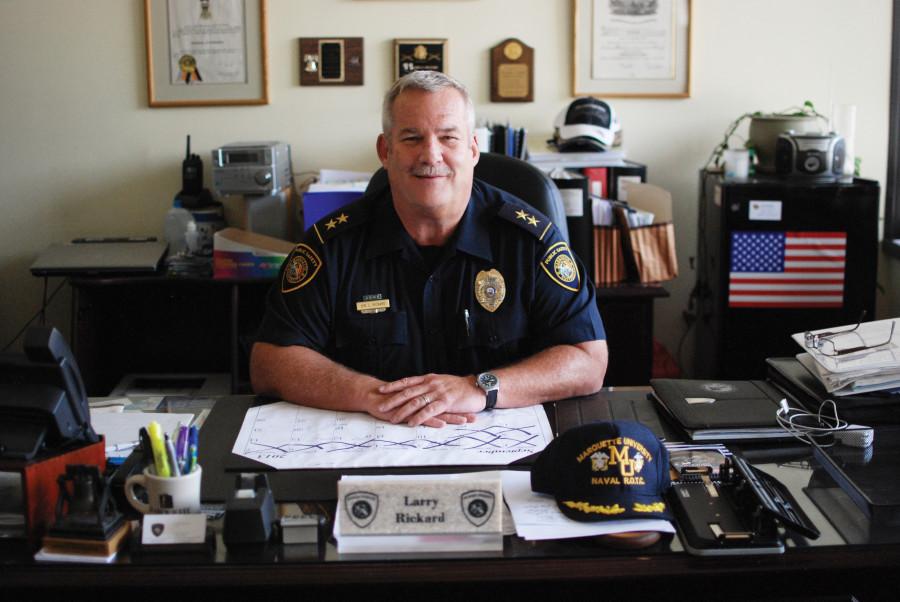 After 21 years of service to the Marquette community, Department of Public Safety Chief and Director Larry Rickard will be retiring from Marquette and moving on to Lynn University in Florida.

During his tenure, Rickard led 80 professional and 100 student staff members who make up the department, which is staffed year-round, 24 hours a day. He installed 600 cameras and 200 blue light phones for emergencies around campus and also professionalized the force through improved training and hiring practices.

ard said. “It’s such a prestigious university, and I really loved it.”

A retirement ceremony will be held Friday, Sept. 13, at 3 p.m. in the AMU Ballrooms with a reception afterward at the Union Sports Annex.

Before joining DPS, Rickard attended the West Point Preparatory Academy in New Jersey  and was later recruited by UW-Whitewater to play football. He then served in the United States Army for 22 years. After getting out of the military, Rickard decided to go into public service by applying to DPS at Marquette.

Rickard started his career with DPS working the night shift. He worked as a life safety officer to improve the university’s evacuation plans and was later promoted to lieutenant shift commander and associate director before being named chief in 2000.

Rickard noted a broad ideology that led him throughout his career at DPS.

“I believe that if you work hard and that you’re kind to people and that you care about people, then amazing things can happen in your career,” Rickard said. “I really believe that, and it’s happened to me.”

“In my entire professional career, which expands over 25 years, I’ve never had the opportunity to meet or work with any chief of campus police or chief of public safety that is so committed to student development on so many levels,” Miller said.

Although Rickard said that there were a lot of things that the department did well in his time as chief, he said that not everything ran smoothly, but that’s where triumph comes from.

“You have a lot of moving parts with a department of this size in an urban campus, and I really believe that over my 30 years of being in leadership positions, it really matters where you stand in times of controversy – not in moments of comfort,” Rickard said. “(That) demonstrates real leadership.”

Despite his role at the forefront of DPS, Rickard said the sustained safety of campus required a team effort.

Rickard said students did their part by talking advantage of Student Safety programs, such as the LIMOs, and using the advice DPS has given, such as walking in groups and asking for help from Public Safety officers if needed.

“(The department) worked as a team,” Rickard said. “And I think it’s important that the students were a part of that team.”

DPS Sergeant Jill Weisensel said that Rickard has instilled a foundation of moral value for the department.

“Chief Rickard has proven that it is possible for an entire organization to put moral values into action,” Weisensel said. “Through his vision and mission, he led this department to becoming one of the best Jesuit Public safety departments in the country. He instilled in his officers his ‘five imperatives’: quality customer service, visibility, teamwork, safety and security, and above all else, professionalism.”

In keeping with “Marquette’s mission to serve others,” Rickard plans to volunteer in his free time. He said that he “would like to thank everyone (at Marquette) for their support, friendship and love.”