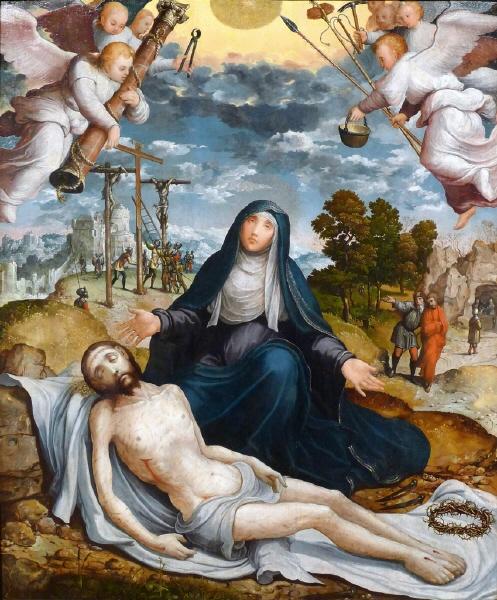 University President chose this piece by Juan Correa de Vivar as his favorite from the Haggerty's permanant collection.

This fall, the Haggerty Museum of Art on Marquette’s campus is presenting an exhibit that explores the personal side of choosing art and embraces the close connection between the museum and the campus community. “Re-seeing the Permanent Collection: The Viewer’s Voice,” will be on display through Dec. 22, featuring a collection of favorite works from the Haggerty’s permanent collection chosen by Marquette students, faculty and administrators.

Participants searched through the online catalog of 2,100 images from the Haggerty’s permanent collection, only a fraction of the museum’s full collection of 5,000 works. They then chose their favorite artwork ranging from the Renaissance to present day.After the pieces were selected, John Loscuito, the Haggerty registrar, took viewers to see the art in the Haggerty’s vault.

“It made a big difference because some people, because of scale, texture, or color, had a different impression of the work, so that was an important shift when you see details you couldn’t see online,” Loscuito said.

After participants finalized their pick for favorite work in person, Lynne Schumow, curator of education at the Haggerty, asked the viewers to write about a personal connection they felt with the work, avoiding the pretension sometimes associated with art criticism.

“(This project) is a great way to learn visual literacy and to think in a different way. There is something for everyone to use here in an educational way and also in an enlightenment way,” Schumow said. “We wanted some sort of personal connection that would make this really different,” Schumow said.

University President the Rev. Scott Pilarz participated in the exhibit, selecting the oil painting, “The Lamentation of Mary Over the Body of Christ with Angels Holding the Symbols of the Passion,” by Spanish Renaissance artist Juan Correa de Vivar. The piece depicts an emotional scene between Mary and Jesus in the passion story from the Bible.

For Pilarz, the work captures the importance of emotion in Jesuit teaching.

“One of the great geniuses or great ideas that Ignatius had was this connection between emotion and religious experience, that it wasn’t simply a matter of the head or thinking about religion, but you wanted people to react emotionally and directly with religious reality,” Pilarz said.

Scott Dale, an associate professor of Spanish, reflected on “Dolores,” an abstract work by Spanish painter Antonio Saura. A mess of color and texture, the work displays the artist’s raw emotion. Every semester Dale brings his classes to see this work among others by Spanish artists. Expressing feeling about the art is familiar to Dale with his classes taking the first step towards interpretation every semester as they view the work.

“It’s a big ball of emotions,” explained Dale, “and in the end it is really the human element this work captures.”

Elizabeth Owen, a senior in the College of Arts & Sciences and a student guard at the Haggerty, picked a mixed media piece, “Dual Personality,” by Lucia Stern that depicts two figures connected in a meditative pose. For Owen, it revealed a contrast.

“(The image) is so serene and that was what attracted me to it,” Owen said. “I feel like many aspects of my life are needlessly chaotic and to come across an image that so starkly contrasted my internal existence, it gave me things to consider.”

Sarah Wadsworth, director of undergraduate studies at Marquette, chose artist Kara Walker’s etching “no world” for the way the image recalls her work in 19th century American Literature. In making a connection, Wadsworth said she also drew upon her experience “early on in her college years in physics and math.” For Wadsworth, the work evolved when she realized that the image was not one of national mythmaking, but rather a take on Plymouth.

“The plant isn’t corn, but it turns out to be tobacco and the slave doesn’t fit, but what drew me to the piece was the shared cultural understanding all Americans have from preschool on,” Wadsworth said.

Daniel Flesch, a student guard and junior in the College of Arts & Sciences, chose “Figaro,” a work by Jean-Baptiste Carpeaux. The piece is a statue depicting Figaro, a figure from music Flesch was immediately drawn to as a musician himself. Flesch, with his experience in the Haggerty, found the writing initially demanding.

“Constructing it is a challenge because you want to come off appropriate and proper,” Flesch said, recalling the writing process. “It was a different type of challenge for me. I was taking organic chemistry at the time.”

Again and again, the viewers explained what a treasure the Haggerty is for Marquette.

“(The Haggerty) is not only important to Marquette, but an asset to all of Milwaukee,” Pilarz said. It’s an important point to remember with a campus centrally located in Milwaukee, the largest urban population center in Wisconsin.

Marquette has a priceless museum full of artwork readily available on campus and next to classrooms. The museum sends the treasures in its vault to exhibitions around the world, including works by Salvador Dali, Keith Haring and photographer Diane Arbus.

This exhibit is special, providing a lens revealing not only the artwork itself but also the Marquette community and the lasting connection to the museum.

Marquette students, staff and visitors can stop by the Haggerty to see selections and learn something about art, the Haggerty and even members of their own community.