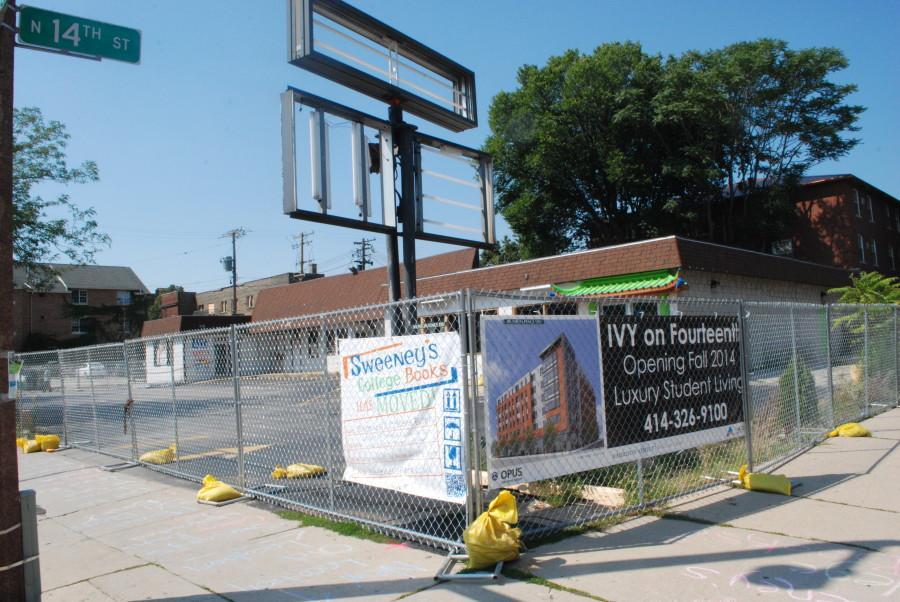 Demolition of the structure on Wells Street that previously housed Kampus Foods, Subway and Sweeney’s College Books will begin in the coming weeks. The Opus Group is then planning to begin construction on a new student housing complex called “Ivy on Fourteenth,” on the same land.

Vice President and General Manager of Opus’ Milwaukee office, Julie Ledger, said the current building’s demolition should be underway in just a couple of weeks, with the apartment complex being finished and opened for residence by the beginning of the 2014 academic year.

Tom Ganey, vice president of planning and university architect, confirmed that the project is not affiliated with Marquette and will be privately completed by Opus.

The six-story building will consist of 80 units and 165 beds. Each unit will include washers and dryers, and the complex will include a fitness center and indoor parking lot.

Ledger said Opus is seeking out other retail tenants for the rest of the first level.

Subway will return inside the 7,500-square-foot ground floor, but Kampus Foods will not be returning.

“We are working on negotiating with a handful of other tenants,” Ledger said. “We certainly plan on having the first floor filled up with retail tenants, but there aren’t any that I can announce at this point.”

Sweeney’s relocated to the first floor of the Catholic Financial Life Building on 1100 W. Wells St. the last week of July. As soon as Sweeney’s decided to leave its old location, the store created a strategy to communicate with students about its departure.

“We did some things via social media to let the students know that we may be moving potentially over the summer,” said Dan Brown, director of the bookstore.

Despite moving a few blocks away, Sweeney’s said its social media efforts worked.

“I wouldn’t say (moving has) been tough,” Brown said. “Business has been excellent.”

Ledger, a Marquette alumna, said Opus’ desire to build an apartment complex at the location had a lot to do with the company’s prior work on campus and its familiarity with the university.

Headquartered in Minneapolis, Opus was the design builder for other projects at Marquette, including the construction of Eckstein and Engineering Halls.

“Because of our knowledge of Marquette, we know the campus well and thought that this was a fantastic site,” Ledger said. “We think that the Marquette community will benefit from a project like this, so the stars aligned.”

The Tribune originally reported the proposed plans for the complex in January.