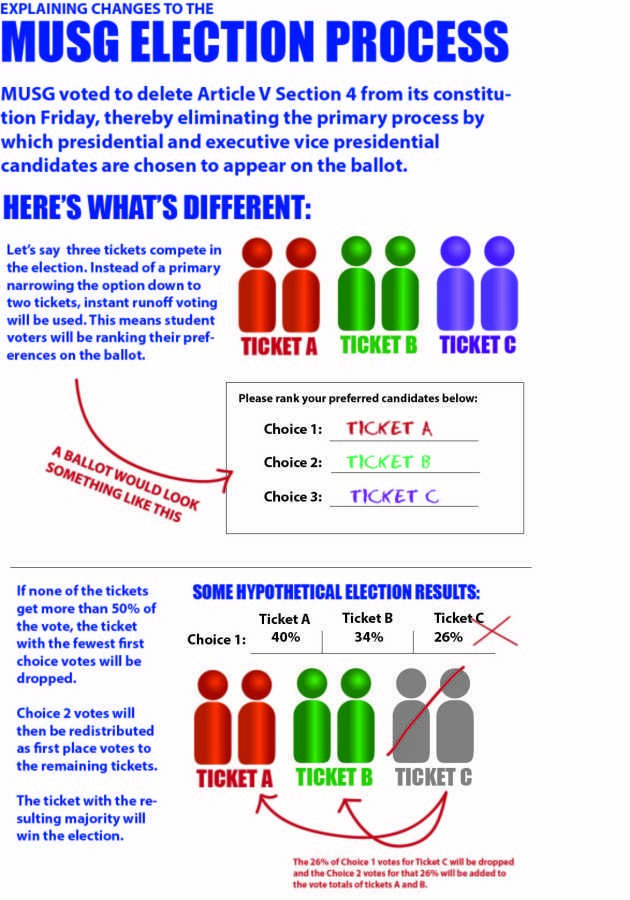 The first changed the wording in several sections of the MUSG election rules but was especially focused on changing the way MUSG presidential elections work with more than two tickets running. It eliminated the primary and introduced a runoff voting process.

In the past, with more than two tickets running for the MUSG president and executive vice president, a primary election was held before the general election to narrow the field down to two tickets, which meant two election dates. MUSG members hope the new system will increase voter turnout.

“(The runoff) would eliminate the need for a primary election, which would allow us to advertise for one date and allow candidates to work toward one date,” said Dani Theis, a freshman in the College of Business Administration and McCormick Hall senator who helped write the legislation.

“Votes would not be dropped,” Theis said. “They still would be considered as a second choice.”

The legislation comes after MUSG faced a compacted spring election in which the presidential election saw two primaries after a vote tabulation error and a delayed general election after one primary ticket was found to have violated an election rule in sending out a mass text message. This was also the first year in the last four that MUSG has needed a primary election, raising questions as to the necessity of the legislation.

“I think it’s necessary in the cases where (a primary would) happen,” said President Sam Schultz, a junior in the College of Arts & Sciences who helped write the legislation. “We know that it’s pretty infrequent that it does, but we thought we had the opportunity to sure up the process.”

The second amendment passed to alter the election process eliminated the signature requirement for those wishing to run for the commuter senator position. Kevin Sanchez is the only commuter senator right now, and he argues that it is often difficult to find commuters on campus because the only meeting spot they have is in the small commuter lounge on the first floor of the AMU.

“It’s been my experience that depending on the week or even the month, it can range from 10 to 35 commuter students,” said Sanchez, a freshman in the College of Education. “So I think that idea that if you have a concrete number, it could just depend on the week.”

The old requirement for commuter senators was 25 signatures. With that eliminated senators will be allowed on the ballot once properly filing with MUSG.